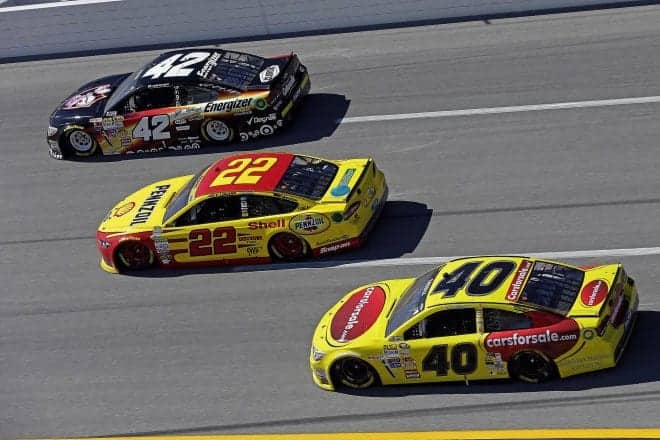 Sometimes it’s easy to discount the smallest teams in the Sprint Cup garage. They don’t often have the budgets or the equipment to be competitive. But what they do have is drive, and in the case of Hillman Racing, it has the talent as well. Team owner Mike Hillman, Sr. has a long history of producing winners. As a crew chief, he has championships in both the Nationwide and Camping World Truck series. Before starting his own team, Hillman played an integral role in developing Germain Racing’s Sprint Cup program.

Landon Cassill is a Nationwide Series Rookie of the Year and moved to Circle Sport’s No. 33 program in 2013. When the team expanded to two cars with Hillman Racing, he moved into the No. 40. The team has gone from a start-and-park effort into a full-time team, and, slowly, into contenders. Cassill finished fourth at Talladega two weeks ago while Circle Sport driver Travis Kvapil finished sixth. They’re finishing on the lead lap more and more often. In a few short years, the organization has shown that there’s a reason to pay attention to these smaller teams, as they can defy the odds and grow in NASCAR’s premier series. Cassill sat down with Amy Henderson to catch up on 2014, his career best finish, and what the future holds.

Amy Henderson, Frontstretch.com: You had your best career Sprint Cup finish at Talladega; talk a little bit about that run.

Landon Cassill: It was amazing. I was really proud of our performance – really the whole weekend. It wasn’t just Sunday. There were a lot of people that weekend who approached me and said how good our car looked and how strong we looked. Brad Keselowski came up to me on Sunday morning and told me how fast my car looked. We had a good car and we knew it. It was really cool to back that up.

Henderson: You’ve been fast on the plate tracks all year, it seems.

Cassill: A year ago we sat down as a group and targeted those four races. We said we were going to pour everything we have into those four races and build the best piece we can and spare no expense. Fortunately, we were able to reap the benefits of it. We had to sacrifice other races and preparation in order to pay for those races. But that was the investment we wanted to make. Now, I’m in a position where I think we can win one. We showed we can finish in the top 5, and I think we can win one. But the next step for us as a team is to be able to make that same kind of investment that we made into those four races in 10 to 15 races.

Henderson: That will take sponsorship. Is it tougher to get someone on board at that next level of funding?

Henderson: Tell us a little bit about 2014 overall. Your team has seen a lot of improvement considering the size of the team and the budget.

Cassill: We’ve been seeing a lot of growth. When I first started here, [it was] a part-time start-and-park team. We have grown and worked together to go from a full-time team that didn’t start and park at all, and now we’re a team that has a significant amount of sponsorship in terms of races covered. Next year, we’re going to be able to cover the same amount of races in sponsorship, but probably with some more money. So we’re seeing some really good growth.

Henderson: The results are showing that. People don’t always realize that, say, a lead lap finish on your budget and with the size of your team is a big deal.

Henderson: You’ve been stable in the No. 40 this year, but you’ve had a variety of drivers in the No. 33, with the most recent being Travis Kvapil. Your teams share a lot, so has that been difficult in terms of feedback, or has it been helpful?

Cassill: It’s been ok, because it’s been drivers that I feel like I can work with. Travis is a really great guy and I enjoy working with him. I’m really happy to have him in the car right now. There are times that this is a lot of extra work because we’re a small team and it’s a little bit tougher for the guys to prepare both cars. But the prize money that that car brings in helps pay the bills.

Henderson: How about next year—any plans?

Cassill: I’m not moving anywhere. I’m still planning on being here with the 40 car and continuing our growth. I don’t know what the plans are with the 33 yet.

Henderson: One thing you must hear a lot, and it’s kind of a double-edged sword, is how talented you are, and if you had a better ride. Talk about what it’s like hearing that. It’s a compliment, but at the same time, you’re doing good things with this team.

Cassill: I appreciate people noticing that. I hope there’s a sponsor that will really jump on board from that. Snap Fitness is getting on board with that, and Carsforsale.com. It would be cool for some of the team owners to really take notice of that, but I’m in no way looking to leave Hillman Racing. It would almost take a really, really good opportunity to fall into my lap, and it’s not something I’m seeking. Just the credit right now is what I appreciate.

Henderson: Talk about Mike Hillman as a car owner. He had a lot of success as a crew chief with Germain Racing, with their truck program. There are a lot of talented people on your team overall.

Henderson: How about life off the track?

Cassill: It’s good. My wife and I finished a pretty intense house renovation, so we’re happy to be in our new home. My triathlon training is going really well. I’m doing a half-Ironman in January. I’ve really gotten hooked on the ultra-endurance sports, so I’m enjoying my plans off the track as well.

sad barely a mention of Landon, Casey, and Travis with their top 10’s at Dega. Good job.

Bill B
Reply to  Kb

Getting a top ten at a RP track is basically the same as hitting the lottery. Congrats but take the RPs away and they’d be back where they usually run.

I kinda like Landon Cassill. Some people think he’s better than his car, so I compare him to Bobby Hamilton. On another NASCAR/racing site I go to, someone mentioned Hamilton and they said he was a great driver with not so great equipment.

I am often to running a blog and i actually recognize your content. The article has really peaks my interest. I am going to bookmark your site and preserve checking for new information.

Pub Quiz TriviaWhen she impersonated Margaret Thatcher on the front cover of Tatler, the suit Vivienne wore had actually been ordered by Thatcher but not yet delivered. When the truth was out, the Iron Lady was furious.

READ: Vivienne Westwood: Everyone buys too many clothes

ways to get bigger breasts

There may be noticeably a bundle to know about this. I assume you made sure good factors in options also.

you are really a good webmaster. The site loading speed is incredible. It seems that you are doing any unique trick. In addition, The contents are masterwork. you have done a wonderful job on this topic!