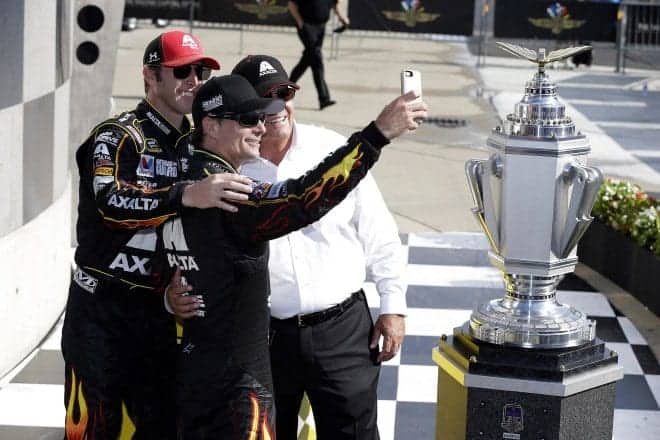 BSNews! – Amid a week of various team changes and shuffles throughout much of the garage, Hendrick Motorsports announced it plans a major team swap involving the No. 24 of Jeff Gordon and the No. 88 of Dale Earnhardt, Jr.

Sources that will remain anonymous, mainly because BSNews ace Stu Padasso has forgotten who he was talking to, report that the entire personnel of both the Nos. 24 and 88 teams will be swapped – including the drivers themselves.

What implications does this move have on the Chase? Basically, it means that Gordon is out and his quest for a fifth title and his first Asterisk Cup is essentially over, while Earnhardt will remain in the hunt.

“Ever since my dad first started racing against Jeff and the things he said about him and his talent, I’ve always wanted to drive the 24 car. This is a dream come true,” said a tearful Earnhardt.

NASCAR says that team swaps are allowed and are not unusual. What is unusual is for it to be carried down to the driver level.

“We’ll leaf through the 2014 rulebook if we have a minute but at this time, we don’t have a problem with it seeing as how ratings this week were flatter than the corners themselves,” said a large, dark-haired NASCAR official with a cheesy mustache who wished to remain anonymous.

In other news from Hendrick Motorsports, Jimmie Johnson is under investigation for domestic violence.

After a recent interview, investigators are investigating (who’d have thunk it?) the home life of Johnson and longtime crew chief Chad Knaus. Johnson recently alluded to Knaus being a “dog” when asked if they would ever split up.

“Yeah, that day is out there,” he said. “I think a crew chief’s lifespan is much shorter than a driver’s. They live in dog years and drivers can carry on much longer. It might not be pretty, and I’m sure you guys have heard things on the radio that got your attention. We’re like family, and we fight like family. We can call each other out on that stuff, and you only hear a piece of it on the radio. There is plenty more that goes on behind closed doors and in meetings.”

In an effort to avoid gaining a reputation like the NFL, NASCAR officials will begin their own investigation as soon as Happy Hour ends, and sources say there is talk of an ad campaign featuring various drivers saying, “no more!” in various forms. Sources confirm that ASPCA is also interested in investigating Johnson’s comments if it can get just 60 cents a day to do it.

In recent weeks, things seem to have gotten out of hand in NASCAR, a sport that is traditionally considered a gentlemanly competition with the competitors usually shaking hands and enjoying a beverage together after the show.

Harvick not happy with Kenseth after Martinsville wreck: Kevin Harvick put Matt Kenseth on notice at Martinsville Speedway on Sunday. Harvick told reporters following the Goody’s 500, “He will not win this championship. I can promise you that.”

Kahne and Vickers disagree on actions of one another: In the case of Kasey Kahne vs. Brian Vickers, it’s he said, he said. Kahne claims innocence, while Vickers didn’t hesitate in his accusations. The two drivers were involved in a lap 161 incident that left Vickers without a hood on his car and looking for payback. Kahne, feeling pressure from leader Jeff Gordon, caught Vickers in the left-rear corner panel of his car in turn 4, sending the No. 55 around and into the inside wall.

Logano, Patrick talk about Charlotte wreck: “We’ve actually talked about it since then, and I feel like we’ve come to a good conclusion of what happened there,” Joey Logano said. “That’s in the past. That’s in the mirror, and we’ll move forward.” From Logano’s point of view, the hatchet is buried, but the driver of the No. 22 Team Penske Ford still has to hope that Danica Patrick doesn’t decide to bury it in his back.

UPDATE: Things may not be as rosy between Danica Patrick and Joey Logano as Logano believes. Logano said earlier this week he had smoothed things over with Patrick and did not expect retaliation over an incident earlier this month between the two at Charlotte. Patrick cautioned Saturday she will not be pushed around by Logano or anyone else on the race track.

“I told him, ‘If you see me in your mirrors, you can get me out of your mirrors or you can leave me there and one is more dangerous than the others,'” she said. “That’s what I told him. So he pointed me by in practice before it was too late today. That was a good start.”

As anyone can ascertain from these examples of violence and threats, officials have a right to be concerned but the fans need to look out too. Some of the tracks themselves are trying to outright kill them.

Yeah, and feel your arteries harden every time you walk clear over to Gate 4 to get some more!

BSNEWS! Your first thought is our first name!

BS Commie news {msnbc}Commiecast orders all cars painted rainbow colors and have DNC/nbc on all quarters .Highest DNC donations give you spot in the chase. and that’s your BSnews or is it BS

I simply want to say I am just newbie to blogging and truly savored this blog. Very likely I’m likely to bookmark your website . You amazingly have exceptional articles. Thanks a lot for sharing your website page.

I’d need to verify with you here. Which isn’t one thing I usually do! I get pleasure from reading a post that can make individuals think. Also, thanks for permitting me to remark!

It truly is practically unthinkable to encounter well-educated readers on this theme, however you look like you understand the things that you’re indicating! Cheers

Trailers respond of your fact,

It’s practically not possible to encounter well-aware users on this content, yet somehow you seem like you know which you’re covering! Thanks