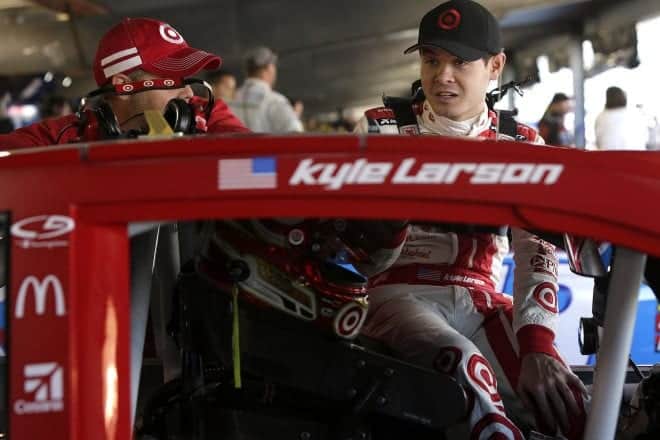 Kyle Larson. Yeah, he was terrible at Martinsville but Larson, who has wrapped up Rookie of the Year, has five top-6 finishes during the Chase. Texas and Homestead (yes, Homestead) still provide him two great opportunities to escape 2014 with a victory. God knows he deserves one at this point after three runner-up finishes. He could have been a nightmare for top contenders had he made the Chase, especially with nothing to lose. But don’t worry; Larson will make it in 2015, no problem

Landon Cassill. Fourth at Talladega with a team that has a tenth of the funding of Cassill’s former employer Hendrick Motorsports was impressive enough. Hillman Racing building that equipment on their own, without any help from the top-tier teams who treat those below them as second-class citizens? That’s a borderline miracle. Cassill followed up with a 19th at Martinsville and has finished no lower than 23rd the past four weeks. For a team whose survival once appeared to be in question, they’re doing a great job of treading water. With the right sponsorship and the right opportunity, this driver, with his quirky personality, could turn himself into Brad Keselowski part two.

AJ Allmendinger. Sure, he got kicked out of the Chase, but the little No. 47 team that could is still kicking butt. Only Kyle Busch has scored more points among the postseason teams eliminated off the Chase Grid, leaving the ‘Dinger in strong position to run top 10 in points, if not fifth, by season’s end. Let’s not forget, a year-and-a-half ago this organization was struggling to run top 25 with Bobby Labonte. To make this much of a charge, while switching manufacturer, chassis, and engine in the offseason is one of the sport’s most impressive stories. Keep in mind, Richard Childress Racing itself only put one car in the Chase and has a max of four top-5 finishes with any car.

Notice we’ve come this far and haven’t even mentioned the words “failed drug test.” The fact ‘Dinger has put that behind him to the degree people are forgetting about it shows how well he’s successfully revitalized a racing career that, just two years ago, was DOA. Impressive.

Did You Notice?… Kevin Harvick is just a little angry at Matt Kenseth over what happened at Martinsville? Kenseth’s wheel-hop Sunday entering turn 1 spun Harvick around and put a serious dent in his title hopes. A 33rd-place finish makes it nearly impossible for the driver of the No. 4 car to make it on points, especially with two tracks ahead where attrition rarely factors into play (Texas and Phoenix).

“He will not win this championship,” Harvick said of Kenseth. “I promise you that.”

So will the bad blood continue when tempers calm down? The answer: probably not. While Harvick and crew chief Rodney Childers(normally laid-back as can be) are furious, they also know chances are high they could win at either of the next two tracks. Harvick dominated Phoenix this Spring, leading 224 laps, and will enter the race as a heavy favorite. Should they succeed, locking up one of the Final Four spots, the No. 4 team enters Homestead leading the most laps of anyone in Cup this season, a four-time winner and one of the strongest on intermediate tracks. Chances they could still take the trophy home are high.

Knowing that, why distract yourself over what Kenseth himself called “a terrible mistake?” The driver has apologized to Harvick, understands the frustration and will do nothing to aggravate things between the two of them. Kenseth, despite remaining a Chaser, is also not in the best position to advance; currently fifth in points, he was a ho-hum 12th at Phoenix in the spring and struggled mightily there last fall. Winless on the year, Joe Gibbs Racing has been a step behind on intermediates and would be a heavy underdog at Homestead if either Kenseth or Denny Hamlin did squeak through.

Bottom line, there’s nothing gained by crying over spilled milk. The mistake happened, Harvick got hit and now he has to bear down and fight back. Now more than ever will be a test of the driver’s maturity approaching 40. After a season of open fire on his pit crew, causing a switch with Tony Stewart’s group before the Chase, can Harvick turn confident instead of critical? Will he focus on the opportunity in front of him or the bad luck that seems to pop up at a moment’s notice? Harvick said all the right things after his Charlotte victory, reminding everyone there’s only so much you can control. But actions right now will speak louder than words. Going after Kenseth, being focused on him for one second after Martinsville could be the kryptonite to kill his best chance for a championship.

Did You Notice?… The transition for Danica Patrick to a new crew chief begins this week, with the company line “short-term pain for long-term gain.” Competition director Greg Zipadelli took great pains last weekend to explain Patrick would be better off with a new age engineer like Daniel Knost in the long-term, the rookie head wrench coming over from Kurt Busch’s No. 41.

That said, there’s no denying a stats sheet that says Danica was in the best stretch of her Cup career. She has six top-20 finishes in the last nine races, as opposed to seven in the 24 events before that. Those numbers would be higher this Chase if not for two wrecks – Charlotte and Martinsville – where she wound up an innocent victim. It finally felt like, after almost two years, the chemistry between she and crew chief Tony Gibson was coming together. So why make a move now?

No, this move speaks more to money and Kurt Busch than anything else. Remember, the bill for Kurt is being paid not by an outside sponsor, not co-owner Tony Stewart, but Gene Haas and Haas Automation. The second Haas isn’t happy with the car, he could pull the plug, Busch’s job and the numerous employees that work on that fourth team. Busch was struggling, fighting through a year of inconsistency and it’s clear Haas wasn’t happy with performance. So if the boss wants a change, and he pays the bills well… what are you going to do? Zipadelli and others at Martinsville uttered the same running theme on the changes… “We couldn’t wait.”

If I’m GoDaddy, well, I’d be a little ticked off at that statement because Busch’s need for Gibson may have stunted Patrick’s development another six to nine months.

At some point, you would think they’d start caring about 25th-place finishes every week… or perhaps Patrick’s marketing power makes them not care? Who knows. It just seems like a move where Busch gets the golden ticket (Gibson) while Patrick’s sent to the back of the line, despite being the worst of the four teams.

– The quest for Ryan Newman’s unlikely championship took a big step Sunday at Martinsville. A third-place run left Newman second in points, just his fourth top-5 finish this season. And while the margin for error is slim, it just so happens two of his best tracks are up ahead in Texas and Phoenix. The No. 31 team was seventh in the desert this spring and has a solid Texas track record even though they were 16th in April. Stay tuned; by the way, Newman is the only one of the eight remaining Chasers not testing down in Homestead this week.

– While we’re on the subject, isn’t it troubling that almost everyone inside the garage area will be privately frustrated if three of the remaining eight Chasers win the title? Hamlin in past years would be nowhere close after missing a race; Newman has fewer top 5s than some drivers have wins (see above); and Kenseth, despite a consistent year, remains winless with three races left. Chances are high one of them will make the Final Four, considering the odds. And if they do? Plenty of officials will be privately holding their breath. No wonder Dale Earnhardt, Jr. was going out of his way to explain his first priority these days is “winning races.”

– The top-2 finishers at Texas in April? Joey Logano and Jeff Gordon. The two favorites for the title entering Texas? Why, Logano and Gordon, of course. How fitting the race could once again be settled between those two, 1-2 in the standings this year without NASCAR’s playoff.

Did you notice that this site seems unable to complete a column without mentioning AJ Almendinger and Kyle Larson? Enough already, we get it. It is only a matter of time before Larson wins, and AJ doesn’t drive drunk or use drugs anymore. You have access we will never have. I am sure there are other interesting stories. Tell a few of them.

I have a feeling Larson will be like Gordon and Johnson at Martinsville someday. Once “it clicks”, he will win multiple races there.

SHR stunted Danica’s development? to what? a solid middle of the pack driver who threatens to wreck front runners because she doesn’t want to get out of their way as opposed to an also ran who usually gets into the top 25 or so through attrition?

Championship contenders? will it come down to who usually runs best at Homestead and doesn’t choke? Hamlin maybe Edwards after Harvick shoots himself in the foot?? yeah probably but sorry, I’ve lost interest.

Correction: Its not even close to being about Kurt Busch. Its definitely to guarantee a steady flow of funds into the coffers of SHR. Face it Patrick will be gone in a shot when the years make it unattractive for GoDaddy to continue supporting her. Busch will probably keep bringing in the cash for years after that.

Did You Notice? Havick didn’t pull one of his bonehead moves after being taken out by Kenseth and park his car in Kenseth’s pit stall. Maybe he is maturing. Nah.

I just want to tell you that I am very new to blogging and site-building and definitely loved this web page. Likely I’m going to bookmark your site . You amazingly come with exceptional well written articles. Regards for revealing your website page.

It truly is practically unattainable to see well-informed readers on this niche, in addition you come across as like you comprehend which you’re covering! Regards

I merely intend to inform you the fact that I am beginner to posting and really enjoyed your article. Most likely I am probably to save your post post . You really have great article reports. Truly Appreciate it for share-out with us your internet write-up.