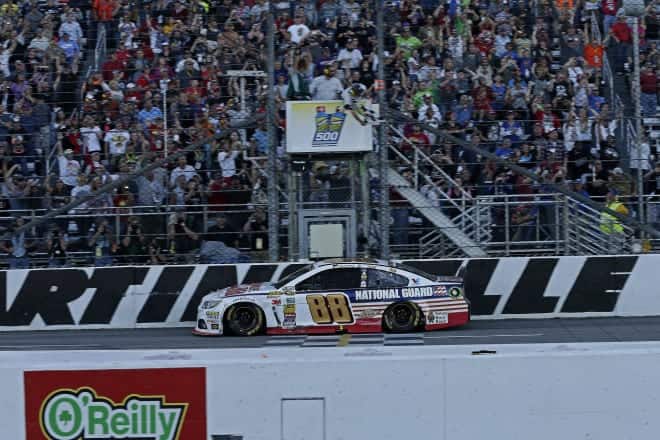 Dale Earnhardt Jr.‘s win at Martinsville last weekend marked the first non-Chase contender to win a race in the Chase this season. After being eliminated from championship contention last weekend at Talladega, Earnhardt Jr. held off a hard-charging Jeff Gordon to claim his fourth win of the season, first at Martinsville and 22nd overall for Hendrick Motorsports. This past weekend was also the 10th anniversary weekend of the plan crash that claimed the lives of so many important members of the Hendrick Motorsports family.

Although paybacks from Charlotte were not cashed in at Martinsville, new rivalries were created. Matt Kenseth and Kevin Harvick tangled on the race track, sending Harvick behind the wall for repairs. His 33rd place finish was the worst of the eight remaining championship drivers. After the race, Harvick told reporters, “He [Kenseth] won’t win this championship. If we don’t win, he won’t win.”

It was a mixed bag of results for the top drivers. Five from the Talladega Power Rankings top 10 finished in the top 10 at Martinsville, while four finished outside the top 30. These finishes led to a surprising top four in points with two races remaining. Next up is the high-speed, high-stakes race at Texas. And with Junior’s win at Martinsville, two points positions are guaranteed to drivers without wins in the Eliminator Round.

It’s actually nearly extremely difficult to see well-updated people on this theme, nonetheless you appear like you know exactly what you’re preaching about! Regards

You have made some really good points there. I looked on the net for more information about the issue and found most individuals will go along with your views on this web site.

It’s almost impossible to see well-updated readers on this theme, however you seem like you know which you’re posting on! Thanks

usually the deal with spotted you albeit, sexy your pet on the way to shreds, and you cradled a dying, blood loss Ugg inside your fists, buyers vowed with avenge tiger woods,

My Partner And I really intend to notify you the fact that I’m really new to posting and completely liked your report. Likely I am most likely to save your blog post . You definitely have superb article material. Be Grateful For it for expressing with us your site webpage.

It really is nearly extremely difficult to find well-informed men and women on this theme, however , you appear like you realize which you’re talking about! Many Thanks