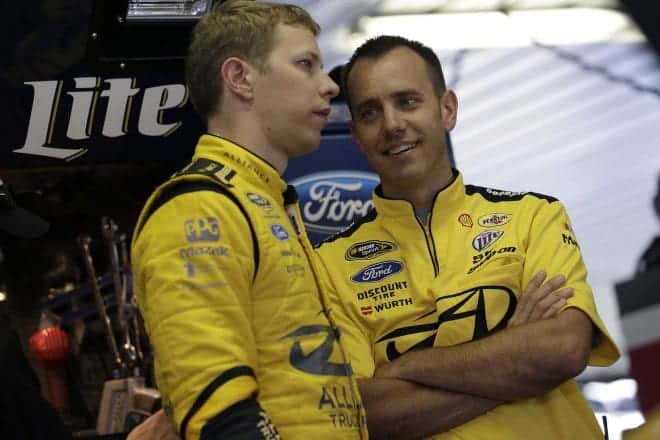 A week after miraculously crawling out with a win at Talladega Superspeedway, Brad Keselowski is right back in a hole. He’s got two races at Texas Motor Speedway and Phoenix International Raceway to win again, or he’s likely out of the championship hunt.

Same story as before, different venues.

But here’s where the added drama comes in this time around: Kevin Harvick, another fast driver with a volatile temper, is in the same hole.

I hope they are getting enough air down there because that could get ugly. Hopefully Brian Vickers isn’t there too, because he’ll probably wreck them both.

There are two races left in the Exterminator Round, or whatever it’s called — and lo and behold, both the winningest driver this season and the driver who has led the most laps have to win.

There might be a conflict. Maybe Keselowski wins Texas and Harvick takes Phoenix —or vice versa — and they both dance happily to Homestead-Miami Speedway for the finale. But with Joey Logano, Jeff Gordon and even Jimmie Johnson around, that could be a tall task.

Here’s why they have to win. Thanks to mechanical problems late in the race at Martinsville, Keselowski wound up 31st and 31 points behind Gordon for the point lead. Harvick, meanwhile, finished 33rd and is 33 points out of the lead after Matt Kenseth did his best Boris Said-at-Watkins Glen impression and wheel-hopped his way into Harvick’s side. Since Dale Earnhardt, Jr., a non-Extinguisher Round driver, won the race, it means that two of the four advancement spots will be awarded to the two highest point finishers who didn’t win in the round.

Maybe three drivers get to Homestead on points, but it seems extremely unlikely that we’ll see four. Carl Edwards (20th) was like a kid lost in a maze at Martinsville, but the other Entertainer Round drivers were all near the top of the leaderboard. Chances are they will be there again at Texas, where there hasn’t been a legitimate caution flag thrown in 11 races. There is very little chance Harvick and Keselowski are going to make up the points to advance, even if one were to place second in each race.

Harvick, who has struggled to close the door on wins all season, faces his first must-win scenario in the championship you can tell he feels like he must win. Harvick’s been on edge all season, showing anger toward his pit crew, throwing backhanded comments at other drivers while feeling sorry for his own misfortune. After Kenseth accidently got into him at Martinsville, Harvick vowed that Kenseth “won’t win the championship. If we won’t, he won’t.”

Harvick better wipe that slate clean before Texas, or his own aggression may be the reason he doesn’t fight for a title at Homestead. He hasn’t had much success at Texas, but has owned Phoenix since the repave, winning three of the last four races there. Harvick’s average finish of 3.6 over the last five races leads all drivers. Guess who’s second? It’s Keselowski at 5.8.

Keselowski’s desperation may be the biggest obstacle Harvick has to face. We’ve already seen what Keselowski can do when his back is pinned against the wall. I’m not just talking about Talladega, either. During his championship season in 2012, he pulled out all of the stops under pressure to beat Johnson for the title. Adversity is his oyster.

Harvick and Keselowski even share the same enemy now: Kenseth. Maybe they can bond over that in the hole they’re in.

That’s one of those backhanded comments I was talking about. And Harvick, you’re right in the middle of it.

There are two races left in the Ultimate Fighter Round, and Harvick and Keselowski have no choice but to win now. And there’s a good chance they’ll be battling each other in a duel of desperation.

Good point..much has been said about Brad and Kevin in the past couple of weeks. Kevin most recently because he wasn’t overjoyed with Matt. Like I said when Morgan Shepard got into Logano running second at Loudon and took him out, what is he supposed to do, thank him? Logano was actually “nice” about it and he still got flak. I think peoples expectations from the old Lazy Boy or stained couch is insane. With that said, both have got to focus and look to the week ahead. For the record, I am no Harvick fan, in fact I can’t stand him. I do say Matt Kenseth, has caused more than a few “racing incidents” this year and I have to say they are the most under reported trigger points of accidents this year. And when it is obvious, it is quickly shrugged off as a “racing” incident” never to be mentioned again. Other drivers are not afforded that same consideration.

Thanks for the laugh. You managed to call this round by every name but the correct one. I love it.
NASCAR fans don’t need no stinkin’ rounds.

I liked as much as you’ll receive performed proper here. The sketch is tasteful, your authored subject matter stylish. nonetheless, you command get got an edginess over that you wish be delivering the following. sick without a doubt come more earlier again as precisely the similar just about a lot often inside case you protect this increase.

I simply want to say I am new to blogging and site-building and certainly enjoyed you’re blog site. Almost certainly I’m want to bookmark your blog . You surely come with terrific articles and reviews. Kudos for sharing with us your webpage.

Oh my goodness! an incredible article dude. Thanks Nevertheless I am experiencing challenge with ur rss . Don’t know why Unable to subscribe to it. Is there anybody getting similar rss downside? Anybody who is aware of kindly respond. Thnkx