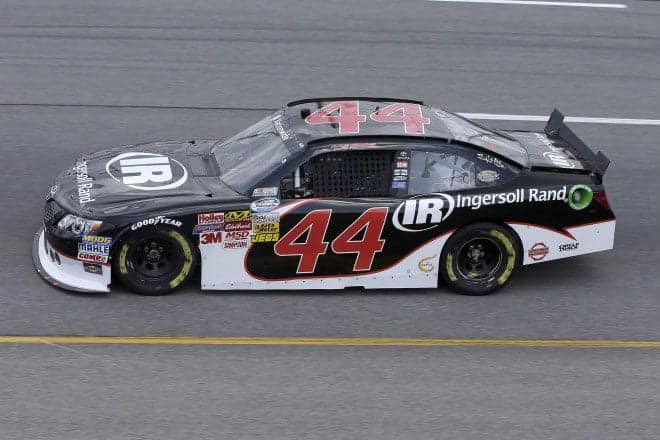 They say everything is bigger in Texas. And for San Antonio, Texas-based fast food chain Whataburger, that statement couldn’t be more true.

The chain will be onboard the No. 44 Toyota Camry for TriStar Motorsports’ David Starr this weekend at Texas Motor Speedway.

According to a statement released from the team, Starr will for the second time be behind the wheel of a machine sponsored by Whataburger in the NASCAR Nationwide Series O’Reilly Auto Parts Challenge at TMS.

“David Starr has a long history of racing in Texas, and Whataburger is proud to partner with him as part of our sponsorship of the NASCAR Nationwide Series race at Texas Motor Speedway,” said Rich Scheffler, Whataburger’s vp of marketing and innovation, in a statement. “We can’t wait to see him in action and wish him the best of luck as he competes.”

Starr and TriStar Motorsports drove the Whataburger 44 Camry to a 15th-place finish in the last race at Texas this season. The 46-year-old, Houston, Texas native has now over 40 appearances at TMS, including an average finish of 26th in the Nationwide Series.

hop over to these guys

I just want to say I am just beginner to blogs and seriously loved you’re blog site. Most likely I’m going to bookmark your blog post . You amazingly have incredible articles and reviews. Many thanks for revealing your website page.

It can be mostly close to impossible to find well-informed parties on this area, however you look like you know the things you’re raving about! Bless You

Oh my goodness! an incredible article dude. Thank you However I am experiencing difficulty with ur rss . Donâ€™t know why Unable to subscribe to it. Is there anyone getting equivalent rss drawback? Anybody who knows kindly respond. Thnkx

We merely desire to share it with you the fact that I’m just novice to blogging and utterly liked your work. Very likely I am inclined to remember your blog post . You literally have stunning article material. Like it for swapping with us your internet site page.