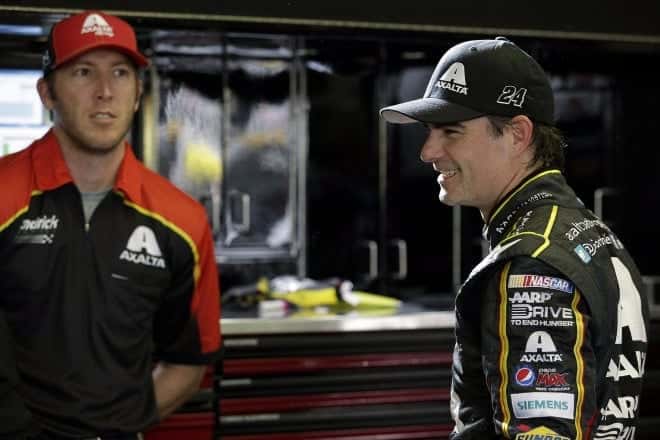 One of the things that is out of a NASCAR fantasy team owner’s control are the revenge tactics that can take place on the track. And since we are now down to the final three races of the season, there seems to be a lot of “getting even” stuff going on.

There are few of those situations in play with races left at Texas Motor Speedway, Phoenix International Raceway and then the finale at Homestead-Miami Speedway.

First, if you had picked either Brian Vickers or Kasey Kahne last week at Martinsville Speedway – or even, regretfully, both – there was nothing worse than seeing which one could extract revenge on the other most times. After awhile it was hard to tell if a driver was doing the revenging or just plain avenging. Finally, NASCAR had to intervene and basically tell them to “settle down, Beavis,” though it was hard to tell which character they were playing from that old MTV show.

And then, if you have Kevin Harvick or Matt Kenseth this late in the game, you would think that’s a pretty good deal as they are two of the eight drivers left in the Chase. However, when those two were involved in an accident, it resulted in Harvick having a torn up-car and finishing 33rd. That left Harvick declaring that if he didn’t win the title, he would make sure Kenseth would not win it either.

Then finally, there is the whole Danica Patrick–Joey Logano ordeal. It sounds like Logano may need some help in understanding just what transpired in their post-wreck conversation this past week, as Logano left believing he and Patrick were on good terms. Patrick, however, sounded a bit more uncertain on that. And with Patrick being the victim of a lot of bump and runs in her first two years in the Sprint Cup Series, she just may be getting fed up enough to extract some of her own revenge. So that’s another Chase driver in Logano who could be in danger and who might do best to keep his distance from Patrick on and off the track.

And who knows, there are probably more of these type of situations that haven’t surfaced completely yet. So here’s hoping the next revenge-motivated accident won’t wreck your fantasy week.

Well, wouldn’t you know that one of the best drivers at Texas for his career and in the last five races just happens to be Kenseth? It’s true that the Joe Gibbs Racing driver doesn’t have a win this year – and Texas will probably be his best shot a win in these last three races. He has two career wins at the track and 17 top-10 finishes in 24 races there. That gives him an active driver best average finish of 8.25. And while Kenseth hasn’t won in his last five trips there, he does have four top-10 finishes in the last five races, so he looks like a pretty safe pick this week, as long as he can stay clear of Harvick.

With Dale Earnhardt, Jr. being the first non-Chaser to win a Chase race this season last week, there’s even more of a possibility of that happening this week. That’s partly because Texas has been a good track for Jimmie Johnson, who has three career wins there and has won two of the last five races held at the speedway. Johnson has a career Texas average finish of 9.45, second behind Kenseth for active drivers, and has also dominated at the front of the field, leading 579 laps in those last five races, more than double of the laps led of the next best driver.

Another non-Chaser who has been good at Texas – and especially in recent races – is Kyle Busch. He has won one of the last five races there and has led the second-most laps in those races at 263. Busch also has three top 5s in those races, with his worst finish being 13th, and his average in those races is 6.2, second behind the 6.0 of Vickers.

And finally, let’s not forget about Jeff Gordon, who is in legitimate pursuit of his fifth title. Gordon hasn’t been great at Texas lately, but he did finish second at Texas in the spring race there this year while leading 40 laps in the race. So it won’t be a surprise to see the No. 24 unload and be pretty fast this weekend, too. For his career, Gordon has one career win there and 12 top-10 finishes in 27 races.

When Logano won at this track earlier this year, it was a pretty big deal for him. Now, he is one of the favorites to make to the NASCAR final four in Homestead, and winning this week would of course be a much bigger deal. Logano’s earlier win at Texas this season was no fluke as he led 108 laps in that race. If he can avoid angering Patrick even more, then he will probably have a legitimate shot at the win this week, too. And just for the record, in his last five races at Texas, Logano has three top 5s, so he was pretty good there even before that spring victory.

A driver who is winless this year but came as close to a victory as he has in a while at Martinsville is Tony Stewart. It has been another tumultuous year for Stewart, and now with three races left, he is in danger of doing something he has never done before in his Sprint Cup career: not win a race. He’s been good at all three of the remaining tracks, including having two career wins there and leading 801 laps in his career, the most among active drivers. Stewart was 10th in the spring race this year, but he led 74 laps in that race, so you know that he can be competitive again this weekend.

Denny Hamlin has been pretty competitive this season and he’s another driver who is glad to see Texas pop up on the schedule. Hamlin has two career wins there in 17 races and nine top-10 finishes in 17 career races. And with Hamlin being in the Chase, you know his team will be working extra hard to put him in Victory Lane for the second time this season.

Two Chasers who shouldn’t be forgotten about at Texas are Carl Edwards and Ryan Newman. Edwards has three career wins there and eight top 10s in his 19 career races. Newman, meanwhile, has one career win at Texas and five top-10 finishes in 22 career races there. In the spring race, Edwards was 14th and Newman 16th, so they’ll be looking for improvement this weekend.

Yes, we’ve got the usual suspects – plus one – this week. If you’ve got room for Kyle Larson on your roster, then by all means use him. He finished fifth in the spring race and with the improvement he and his team have shown, it would not be a surprise to see him back in the top 5 again this week.

Then there is Austin Dillon, who has shown some late season improvement as well, even though it has not been as dramatic as fellow rookie Larson’s. Dillon finished 21st in the spring race, so if he can turn that into a top-15 finish, that would certainly be acceptable.

Trevor Bayne continues his part-time schedule in the No. 21 car this week. He finished 19th at Texas and he has two top-20 finishes in his five career races there, including a 19th in the spring race this year.

Lastly, Patrick, who will be in her first race with new crew chief Daniel Knost. Maybe that will help her at Texas, where she has finished between 24th and 28th in each of her four races there.

The leaders in the Frontstretch Fantasy League on Yahoo! remained the same as NoBarNASCAR still leads with 8,838 points, followed by LeftTurnOnly at 8,711 and Mojothemonkey at 8,695. The biggest mover of the week were the Flying 7’s and the Grid Dolls, each moving up eight spots in the standings.

Seriously, making a non issue a bigger issue? Logano did not bump and run, she cut down on him..look at the replay from his car cam. She isn’t the victim here at all. She did go to the press with her victim status, as she has been out of the spotlight, not to her liking. Logano seemed to take her fault and make it his own, much like Harvick made a honest assessment a few weeks ago and shortly after there was a retraction from Kevin. Nascar had a little talk. I am surprised they didn’t fine Harvick like they did Hamlin for speaking honestly of what he felt about the newest car model. Truth is truth. I dare say if it was any other driver she would not have made the bogus bravado she did. Bully tendencies from a non relevant participant each week, that’s some nerve. She ended up finishing where her average basically always is. A lot of mouth, and zero humility. If for some insane reason she feels she needs to exact revenge on Logano for her mistake, a verbal threat was made to a fellow driver (and Cup competitor), hopefully Nascar will have the stones to follow through and take it to the max. And to go and confront Mike H. about Dega quals regarding her boyfriend, wow! Way to neuter your man, can’t think of a larger forum to do it.

Really enjoyed this update, how can I make is so that I receive an alert email when there is a new article?