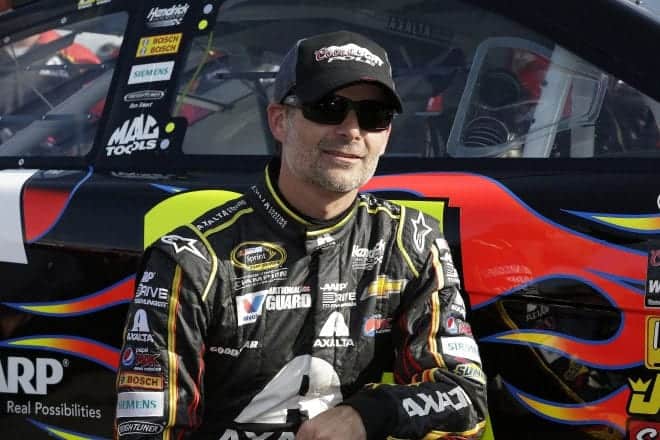 It’s that goofy time of year again.  No, not Chase time, but Halloween, which has evolved into an interesting form of departure from people’s daily lives and now seems to be as important for adults (using that term loosely) as it does for children.  And for the college-aged, it’s a whole different thing.

For NASCAR, the holiday represents a mark indicating the end of the season.  As the leaves have turned and the chill begins dropping in across the country, the racing season moves towards its conclusion and the last remnants of drama.  The race at Martinsville helped set up some interesting scenarios.

But hey, it’s Halloween, put on a costume and pass out the candy.

Happiness Is… Dracula.  The adage is that once you invite a vampire into a dwelling that he can remain and return there as he / she sees fit.  Hence, they take on particular aspect of power and continue their reign until they meet their demise.  At this point, one could argue that every Chase driver who remains is Dracula, as they’ve made it through two rounds and have shots at Homestead.

But there are a couple drivers who look especially good wearing the black cape and the pointy teeth: Jeff Gordon and Matt Kenseth.  These older drivers continue to drink blood from the fountain of youth and remain fortunate moving forward.  Gordon somehow escaped Talladega with a three-point edge to advance, while the winless Kenseth continues to roll on – and through – people and still has a good shot at the big trophy.  Make sure to have garlic handy when hanging out with either of them.

Happiness Is… The Invisible Man.  Other than making allusions to Ralph Ellison’s tome, which addressed racism in the burgeoning industrial society, the invisible man is a difficult concept to pull off.  How exactly would one dress to portray such a thing?  The easy answer: Denny Hamlin.  Not only does Hamlin barely get mentioned before, during, or after the races, it’s easy to forget that he’s even in the Chase.

And with his eighth-place finish at Martinsville, he’s now in a pretty good shape to move forward as well.  With the underbelly of winning means everything being that consistency is key, perhaps the Gibbs organization figured something out by building reliable cars that run pretty damn well but not super awesome.  This mindset seems to be what is keeping Hamlin and Kenseth alive, and would have for Kyle Busch had Talladega not been so much of a disaster.

Happiness Is… Walkers.  Each week, about 31 million more people watch The Walking Dead than do NASCAR Cup races.  Look up the numbers, it’s true.  Or something.  Regardless, the show’s kind of popular.  The walkers, remember – they’re not zombies, they’ve never used that word on the show, traipse about with seemingly endless energy in their quest to devour fresh flesh.  The thing to remember about the walkers is that they’ll just keep coming, they’re relentless.

Doing his best impression of a walker, Brad Keselowski can paint his face up to look decayed and forego using words, as he takes the track this weekend at Texas.  His race at Martinsville may not have gone as he’d liked, but whatever, he’ll just drag himself along and hunt down the pack on a 1.5-mile track like he has done enough this season.  Penske has looked better than Hendrick at those types of tracks and the Chase incident last week can be put in the rearview with a fresh score this weekend.  Remember, unless you kill the head, walkers keep coming.

Happiness Is… Clowns.  Clowns are fun, right?  All happy and dancing about and playing with balloons.  Oh, right, there’s a group of idiots running around France dressed as clowns that is terrorizing people.  And then there’s all of those killer clown bad horror films.  Maybe the clown facade masks the true torment that resides deep within our souls.  Or maybe Happy Harvick is going to roll out pissed this weekend after Kenseth didn’t like his magic show at Martinsville.

Harvick is decent at Martinsville, but the chances of him scoring the win there weren’t stellar.  But scoring a 33rd-place finish is kind of disaster, especially as last compared to the other Chase drivers.  See, this is where having a good points day still matters.  So it’s all or nothing for Happy for the next two races, meaning that he’s gotta come out like an angry clown.  The amazing aspect is that pundits push the notion that Kes-walker could likely win at Texas and that Happy Angry Clown could likely win at Phoenix and that everything would be right with the world.  That kind of thinking is wildly fantastical and makes it seem like scoring a race win is just that easy for these drivers.  Aren’t there 41 other cars on the track?

Happiness Is… Magicians.  While NASCAR will be treading about the Dallas area, some other racing will be happening a few hours away.  That’s right, the pinky-out crowd of F1 will be racing at the Circuit of the Americas, also setting up the its late-season stretch to the championship that Lewis Hamilton seems to already have in hand.

Bernie Ecclestone, the F1 maestro, deserves to cloak himself in a magician’s outfit for somehow getting COTA to allow him to go head-to-head with NASCAR and then snicker about it to his constituents back in Europe.  It’s not that the two series will be going at it like fisticuffs, as the two series are wildly divergent, but it’s a chance for Ecclestone to say that regardless of what NASCAR thinks it is, there will still be more people around the globe watching his little sport that is in serious need of some tinkering as two teams won’t even be making the trip to the track and bringing about the smallest field of cars in years.  But whatever, the trick with magic is to get you to focus on one thing as you do another.

Great job – if you don’t mind – one more

I’m a Joey fan. Maybe he’ll win at Texas, like he did this spring. He could also perhaps points his way in, if he finishes top-5 in the next races. I hope he’s alive to win it all (not eliminated) at Homestead. My Nationwide driver will possibly be mathematically eliminated from championship before Homestead. As it stands now, that could happen this week. He won his 1st Nationwide race at Texas, so he could win and be mathematically eliminated at Phoenix.