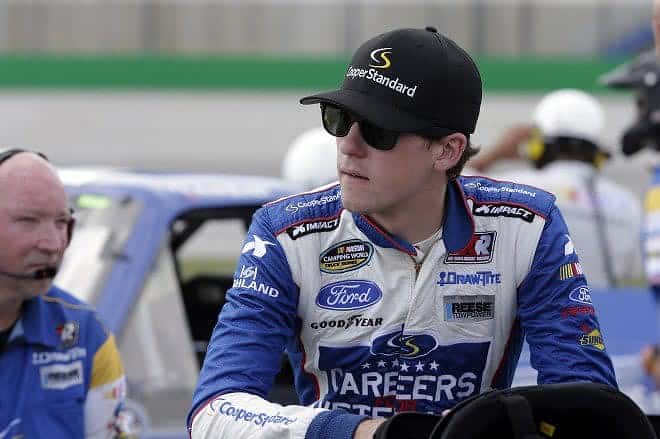 As the Camping World Truck Series rolls into Texas Motor Speedway on Friday night, I took a look at the entry list and found just 29 trucks. It marks yet another short field for a series that’s been struggling most of the season to meet the maximum truck count of 36. Last week, NASCAR announced it would shrink the Truck Series field for the 2015 season to 32, a move that supports my concerns about the health of the series that I expressed in this column a few weeks ago.

Immediately when the announcement was made, I couldn’t help but wonder how many more times the field would be trimmed before the sanctioning body determined it wouldn’t even be worth having the series around anymore. The good news, however, is that it should eliminate some of the start-and-park entries and encourage teams to run the full distance, which would, in turn, bring more interest to the series when it comes to sponsors, something it so desperately needs right now.

With all of that said, there is still a champion to determine before those changes will take effect, and with just three races remaining, the top 4 drivers are separated by a mere 40 points. While Matt Crafton appears to have a stronghold on the points lead, NASCAR has taught us that things can change in the blink of an eye. Considering the margin, any of those four can swoop in and walk away with the big trophy in a couple weeks, but who has the best shot at taking home the prize?

Fresh off of his first career championship, Matt Crafton stayed out of trouble at Daytona with a quiet 13th-place finish that allowed him to start the year on a positive note. Since then, he’s visited Victory Lane twice and has held the lead in the standings for the last five races. Something that’s been incredibly beneficial for Crafton this season is his mindset to approach each race one at a time and let the points take care of themselves.

A dominant victory in June where he led 118 of 167 laps is a great reason to point at Crafton as a potential winner again this weekend, something that would likely help solidify his spot atop the standings. In fact, the last six races at Texas have been incredibly kind to Crafton, who has finished no worse than 10th. The same can be said about Phoenix for the driver of the No. 88. Aside from a 20th-place finish in 2012 when he was caught in a mid-race accident, Crafton has finished no worse than eighth at the facility. Homestead is where things get a little bit less certain, though; he hasn’t posted a top-10 finish since a sixth-place run in 2010, so it’s reasonable to expect the season finale could be a struggle for Crafton.

After starting the season with a sixth at Daytona and a fifth at Martinsville, Ryan Blaney looked like he would be a pretty strong competitor in this year’s championship battle. But back-to-back 22nd-place finishes at Kansas and Charlotte dropped him from third to ninth in the standings, leaving the sophomore driver a bit of a hole to dig out of. Blaney led the points following a pair of top 5s at Eldora and Pocono, but a 21st-place finish at Michigan once again dropped him a couple spots to third. However, results of no worse than sixth in the last three events have put Blaney in a spot where he is within striking distance of the point leader. With just six markers to make up in each event to tie Crafton, the deficit he faces is hardly insurmountable.

Blaney’s performance at Texas resembles that of a roller-coaster: 30th, eighth 15th and fourth. It’s not exactly the consistency a championship contender would like to have going into this weekend. That being said, it’s far from a death knell. What’s interesting to note is that the driver of the No. 29 has found success in the June races he’s run at the mile-and-a-half oval. He led 45 laps earlier this year, so it’s likely that he’ll be strong once again, although history doesn’t bode well for his performance this weekend. Meanwhile, Phoenix is a different story; two starts and two top-10 finishes (average of sixth), and much of the same could be said about Homestead. While he crashed out of his first start at the speedway, Blaney started on the pole last year and finished runner-up to Kyle Busch, who, to put it bluntly, is nearly impossible to beat when he races in the Truck Series. Blaney’s previous seasons at the remaining three tracks certainly bode well for his championship hopes, so he has a way to control his own destiny and walk away knowing he gave it everything he’s got.

Fresh off of his third win this season at Martinsville, Darrell Wallace, Jr. heads into Texas with a tremendous amount of momentum. Sitting just 22 points out of a championship battle that, earlier this year, looked unattainable, the sophomore driver looks to the success his organization as a whole has had throughout the year (11 wins out of 19 races) to carry him through to the championship.

In three previous starts at Texas, Wallace has yet to finish outside the top 10; he finished sixth and seventh in the two events during his rookie season. Add in the fact that KBM has multiple wins on mile-and-a-half tracks this season, and it’s realistic to believe his name will be in the conversation as the laps wind down Friday night. Phoenix and Homestead present a bit more of a challenge since the series only visits both facilities once. With finishes of 15th and 20th, respectively, it’s easy to look at the past and expect Wallace to not compete for the win. However, you can’t automatically assume that a rookie who had absolutely no experience at a track wouldn’t learn something that would translate into success, especially given that Homestead is another one of those mile-and-a-halfs. In reality, as strong as this team has been this season, Wallace could easily make up enough ground between now and Homestead to keep it interesting until the checkered flag flies.

Johnny Sauter has had what can only be described as an up-and-down season. While his finishes don’t look awful, the No. 98 team has often struggled with setups and strategy. With that said, Sauter was easily still in this championship battle at Talladega until he got caught up in a caution not of his own making. Though he walked away disheartened and had all but given up hope on winning the championship, a seventh-place run at Martinsville last weekend kept him within striking distance, even if it is a long shot. It’s not exactly easy to make up 40 points when each position on the track is worth just one, however Sauter’s best-case scenario would be to deliver strong runs, while the competition ahead of him falters.

The good news for the No. 98 team is its driver’s history at the three remaining tracks. Texas is a strong track for Sauter. He has just two finishes outside the top 10, including an 11th-place run in his first start at the mile-and-a-half track. Sauter swept the races at Texas in 2012 and has finished no worse than seventh since June, 2011. Phoenix is another strong track for Sauter, and his average finish of ninth is deceiving, as it’s skewed by a 25th-place finish in 2012 after he was involved in a mid-race wreck. Aside from that race, Sauter has posted no worse than eighth. Meanwhile, Homestead is, by far, the biggest remaining question mark for Sauter. It’s where he’s posted his worst average finish (12.6), but at the same time, he’s finished inside the top 6 in three of the last four events, including a victory in 2011. His chances aren’t completely over, but Sauter and the No. 98 team will need to be nearly flawless in the remaining three races if he is to remain within striking distance.

While it looks like Matt Crafton remains as a driver who looks nearly invincible again this season in terms of the championship battle, the old saying “it ain’t over ’til it’s over” certainly applies here. Any of the four drivers that still has a shot could easily tank at one or more of the three remaining tracks on the schedule, allowing the competition to move ahead, and the same could be said of any of them going on a tear and winning. We’ll just have to be patient to see who will come out on top when the checkered flag flies over Homestead-Miami Speedway.

Content Director Beth heads up management of our 30-person staff, acting as Tom’s main assistant with technology and personnel while working as Frontstretch’s Truck Series expert. The author of Truckin’ Thursdays and the coordinator of the site’s pre and post-race coverage, she also runs a periodic charity column that spotlights when NASCAR gives back. A childhood transplant to Texas, Beth is a 15-year writing veteran who has contributed content to BRANDT and Athlon Sports, among other outlets.
@NASCARBeth
Previous Scott Lagasse, Jr. to Race For RCR in Ford 300 at Homestead
Next Happiness Is… Dressing Up for Halloween