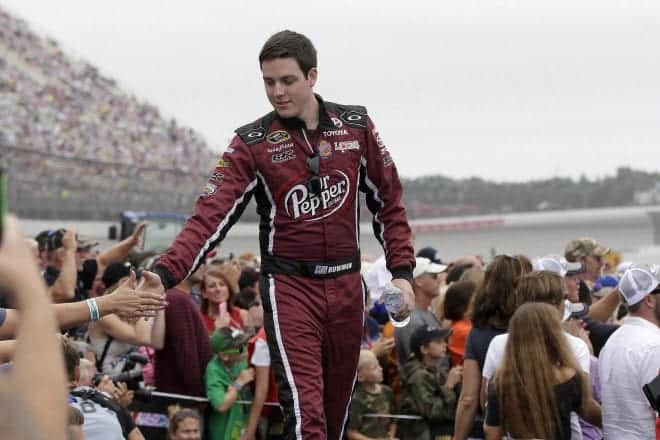 The weekend started with a lot of buzz in the Nationwide Series garage. All eyes were on the No. 5 car, which ended up being the quickest car in practice. However, qualifying didn’t go as well as planned. The race was even worse.

But this race is probably one young man’s best of the year. After all, 2014 has been one that he would want to forget. But running for the Sunoco Rookie of the Year award in the Sprint Cup Series, it’s unlikely that he’ll ever forget the roller coaster season that 2014 has become.

Alex Bowman, 21, signed on with BK Racing to pilot their re-branded No. 23 Toyota Camry (formerly No. 93) this year. It was the best opportunity he could get after parting ways prior to the final week of the 2013 Nationwide Series season with RAB Racing. Bowman had a solid rookie season in NASCAR’s second-tier division – finishing 11th in points with a pair of top 5s and six top 10s.

When he agreed to drive for the organization, expectations weren’t extremely high. Any finish inside of the top 20 is a victory, and a top 25 is probably going to get a lot of high-fives for Bowman. But he has barely been able to do that with the team. Although he has run every event in 2014 (the only driver at BK Racing to do so), he has a mere three top-25 finishes. His best result came at Daytona in July, where most small teams hope they can avoid the Big One to record their best result of the year. Bowman did that, but it’s his performance at other tracks that has questioned his ability behind the wheel.

Making the jump to the Cup Series was a risky move, and he understood that. However, it has not paid off. He has four DNFs this year – three of which have been for accidents. But with a wry grin inside of the Cup Series garage with his Dr. Pepper team, Bowman has been able to make the most of his limited equipment when nothing goes wrong.

That’s what caught the attention of Dale Earnhardt, Jr. and his sister, Kelley Earnhardt-Miller. The two are in charge of one of the top teams in the Nationwide Series: JR Motorsports. Earnhardt-Miller is the general manager of the organization, and it had room for a driver to fill in that race at Charlotte. Bowman came on board with Dirty Mo Radio, which is the radio show on the team owner’s website – showing how much he believed in giving the 21-year-old a shot at competing for a win.

Thanks to a 12th-place result at Charlotte, Bowman will be back with JR Motorsports in the No. 5 car at Phoenix with sponsorship from LINE-X.

But this might be his final shot at stardom, even though he’s extremely young.

In a sport where drivers come and go, he needs to be careful that he is not one of them. BK Racing team owner Ron Devine has said he wants to keep Bowman in his stable next year. With the added experience from this year and a few sponsorship dollars that are coming in, the team can definitely improve. However, it’s not going to be top equipment anytime soon. But the equipment that he’ll be in at Phoenix for the Nationwide Series race is top notch. It’s a team that he can do well with, even if there isn’t much of a long-term future in the midst of the thrill of running up front instead of getting lapped early in the race.

Expectations are high for Phoenix. He’s going to be working with veteran crew chief Ernie Cope for just the second time. Cope has won five races this year for the team and has worked with seven drivers. In 2015, this team will change over to the No. 88 Chevrolet. Talks are still ongoing to finalize sponsorship, but Bowman could get a chunk of races if he performs well at Phoenix. If he stays at BK Racing, that would be a tremendous boost to his stock, showing he’s capable of running well when given the equipment to do so.

But he’s going to need to be very impressive, otherwise he’ll be racing for a back of the pack Cup Series team for the rest of his career, and that’s certainly not what he wants. This team can showcase his potential. That could lead to him getting a bigger, better deal with another Cup Series team just like it did for Sam Hornish, Jr. Or it could also lead to a full-time deal with JR Motorsports similar to that of Regan Smith.

Either way, it’s an opportunity that Bowman must capitalize on, otherwise his abysmal 32.3 average finish and he will be forgotten about in a heartbeat.