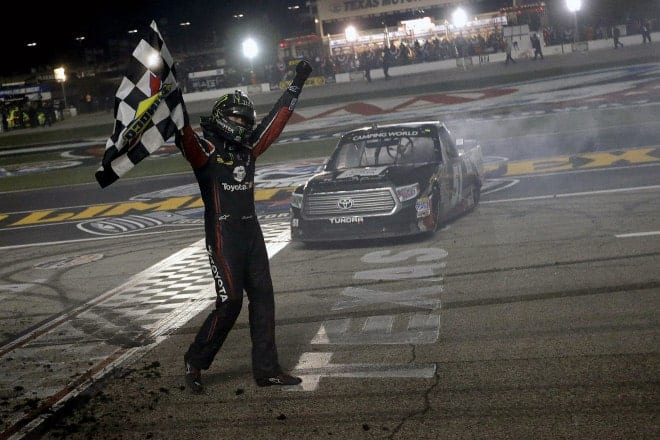 Who Should Have Won: Once again, Kyle Busch Motorsports teammates Darrell Wallace, Jr. and Kyle Busch were the class of the field, often swapping the lead and engaging in spirited side-by-side battles, sometimes for several laps at a time. But when Wallace’s engine went south, Busch looked liked he would sail to victory until late pit strategy put German Quiroga in position to lead in the final handful of laps. If not for a late-race caution that tightened up the field for a green-white-checkered finish, it may have been Quiroga celebrating, though Busch is hands down stronger when it comes to restarts, and he proved that Friday night.

As the laps wound to a close in Friday night’s race at Texas Motor Speedway, it looked like the checkers would fly with relative quiet end. But with a couple laps remaining, teammates Jeb Burton and Johnny Sauter got together and the latter went spinning across the frontstretch, setting up a green-white-checkered finish. The incident looked like a matter of close-quarters driving with the race win on the line, but Sauter and his crew didn’t think so.

After the race ended, eyes were drawn to pit road where the two were parked side-by-side and a mini battle broke out. While it wasn’t nearly the fracas that evolved on Sunday after the Cup race, there was definitely some tension and an upset Sauter yet again. After the race, Burton tried to explain his point of view.

“That thing that we had with my teammate, that was a thing that I didn’t want to happen,” said Burton, who finished second. “(Johnny) checked up a little bit and I had the run and I got into him a little bit. He was already sideways and sent him into the grass.

“I’ll probably try to let him cool down a little bit. Me and Johnny are good friends. That’s the last thing I want to do … it was a mistake, an accident. We’ll talk it over and move on.”

In reality, this tension is likely over and will be a non-issue at Phoenix, especially since ThorSport owner Duke Thorson won’t let any discord between teammates sit and fester. It’s yet another case of hot tempers that didn’t get a chance to look at a situation objectively before reacting.

And Then There Were Two

Last week in Truckin’ Thursdays, I documented the drivers that remained in the championship battle heading into Texas Motor Speedway. While there were a couple of long shots that would have to rely on a little bad luck for the front-runners to make major gains, there were four drivers who had a shot at the championship. What a difference a week makes.

Following the checkered flag at Texas, the championship battle is down to two and not all that close. Johnny Sauter suffered a late-race spin and finished 16th, and the engine blew on Darrell Wallace, Jr.’s No. 54 Toyota, leaving him to settle for a disappointing 26th-place finish. Now third in points, Wallace finds himself more than 40 points behind the leader.

Meanwhile, Ryan Blaney sits 23 markers behind Matt Crafton with Phoenix and Homestead waiting to close out the year. It’s probably not going to be a nail-biter at Homestead like some championship battles, but you’ve got to hand it to the No. 88 team as it has certainly stepped up as a strong and consistent pairing again this year.

No. of Rookies to Finish in the Top 10: 2; Tyler Reddick, finished fourth; Cameron Hayley, finished tenth

“This was a great night for our Draw-Tite Ford F-150. We had a really good truck we were just free all night long. It was a handful to hang on to but the guys tuned on it and got it running right. I grew up racing sideways on dirt. Dirt racing is all about car control, running sideways and not wrecking pretty much so we put that to use here. It helps a lot with car control especially on these big mile-and-a-halfs whenever you have a loose vehicle. We had a lot of things that didn’t go perfect for us and we did a good job with that.” Tyler Reddick

Up Next: The Camping World Truck Series heads out west to Phoenix International Raceway for the Lucas Oil 150 next Friday night. Coverage begins at 8:00 p.m. ET on Fox Sports 1; the race can also be heard on your local MRN affiliate or SiriusXM NASCAR channel 90.