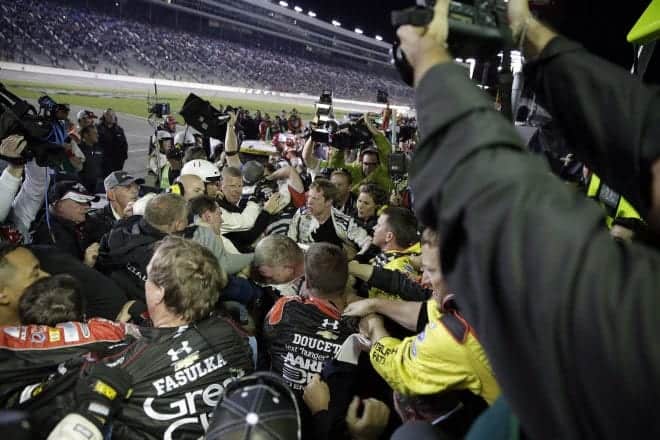 The sanctioning body has a lot of work to do this week as NASCAR VP of Competition Robin Pemberton and his staff sort through video and reports of what transpired after the conclusion of the AAA Texas 500 at Texas Motor Speedway in Fort Worth on Sunday night.

The brawl that occurred between Brad Keselowski and Jeff Gordon was the center of attention of the NASCAR world on Sunday night and spurred discussion on social media about the new Chase format and driver’s emotions showing through.

While the main reason the brawl erupted – a late-race incident between the race-leading Gordon and third-place Keselowski, which ended up in a cut tire for Gordon ending his bid at the race victory – was not deemed over-the-line by NASCAR, the fight that resulted may very well be.

“We knew the [new Chase] format was going to put a lot of pressure on people to perform and make aggressive moves and decisions out there on the race track,” Pemberton said following the race. “You could see the result of that after the race. We’re going to take our time. We’ve got a lot of film to review and things like that.

“The important thing is to make the right decision at the end of the day… you shouldn’t punch somebody. Everybody gets together, and when you’re holding onto each other and grabbing and this, that and the other, that’s one thing. When punches are landed, that’s a different scenario. We have a lot of work to do this week.”

Keselowski, who finished third at Texas on Sunday, currently sits on probation from NASCAR after a post-race skirmish with his car in the garage area and on pit road at Charlotte. Gordon, who led 49 laps of the 500 mile race, finished 29th.

There was no brawl between Gordon and Keselowski; Jeff grabbed Brad’s collar, Brad didn’t “brawl” back. The only punches landed were by crew members. I didn’t see anything by either driver that any more serious than
Kenseth’s actions at Charlotte and Matt wasn’t penalized. My guess is only crew members get punished.