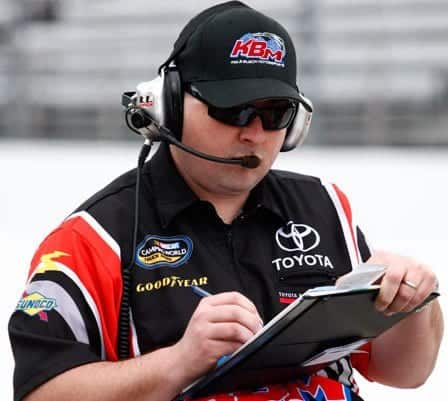 Eric Phillips set to move up to the Xfinity Series in 2015 with Joe Gibbs Racing (Credit: Kyle Busch Motorsports)

“I’m gonna be moving on, I’m gonna go to JGR at the end of the year,” Phillips said. “I can’t talk about what all’s going to take place there but I’m excited about that. Obviously, it’s a big deal to leave KBM, but I’m looking forward to what JGR brings next year.

“Excited about it and a little bothered by it, I guess. I put a lot of work and effort into KBM. There wasn’t anything here when I started so the last five years have been a lot of effort to get the company the achievements that we’ve had over the last five years.”

As a crew chief in the truck series, Phillips has won 36 races. This year, he has nine victories, split between Erik Jones and Kyle Busch, as the No. 51 truck leads the owner’s points standings by 12 points over Matt Crafton‘s No. 88.

Per the rumors, Phillips will replace Adam Stevens on the No. 54 NNS entry that is split between Busch and Sam Hornish Jr., while Stevens moves up to the Sprint Cup Series to crew chief for Busch. Busch and his current Sprint Cup crew chief Dave Rogers have had some tense moments this year, highlighted by their fight at Bristol Motor Speedway in August. The pair argued back and forth on the radio before Rogers told Busch to “park it behind the truck and take your whiny little ass to the bus.”

Though Rogers hasn’t officially announced he is leaving next season, the rumor mill has been buzzing with discussions that Rogers likely will not be back as Busch’s crew chief next season.