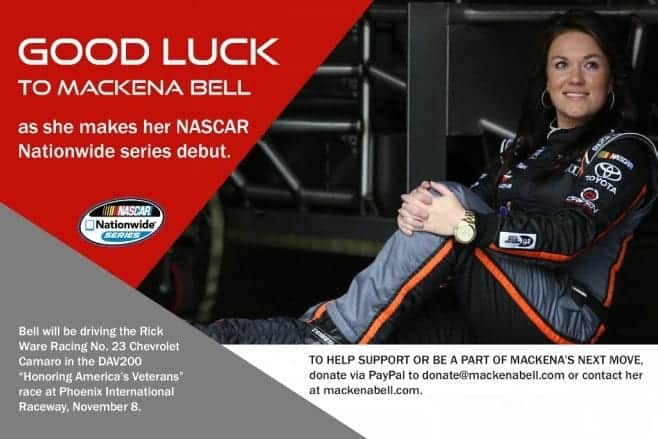 Bell, the only female graduate of NASCAR's Drive for Diversity Program, is set to make her Nationwide Series debut at Phoenix. (Credit: Rev Racing)

“It’s a step and it may be a step I never get to take again,” she commented in a press release announcing the partnership. “Rides are hard to come by in this sport without significant backing, wealthy families or big name connections, so it’s awesome to be able to say I will have a NASCAR Nationwide start under my belt.”

The NASCAR K&N Pro East Series driver is the only female graduate of NASCAR’s Drive for Diversity program. Bell finished 14th in points this past season, highlighted by a single top-10 finish with an eighth in the season opener at New Smryna Speedway. The 24-year-old’s plans for 2015 are up in the air, increasing the importance of a strong performance Saturday at Phoenix.

“I’m just going to enjoy every minute of it,” she said. “For so long, I’ve put so much pressure on myself to do something, to prove something, that I’ve not always enjoyed the ride. This race will be different. I’m going to enjoy this opportunity and learn as much as possible. This series is very competitive and there are a lot of teams with huge sponsors and great backing. Running for a little team gives you the chance to just take it all in, experience the differences and not feel the pressure, or expectation of setting the world on fire. I’m really looking forward to it.”

Rick Ware Racing has had limited success this season, posting a best finish of third at Elkhart Lake with road course ace Kevin O’Connell. They have yet to score a top-20 result on an oval track this season, though.