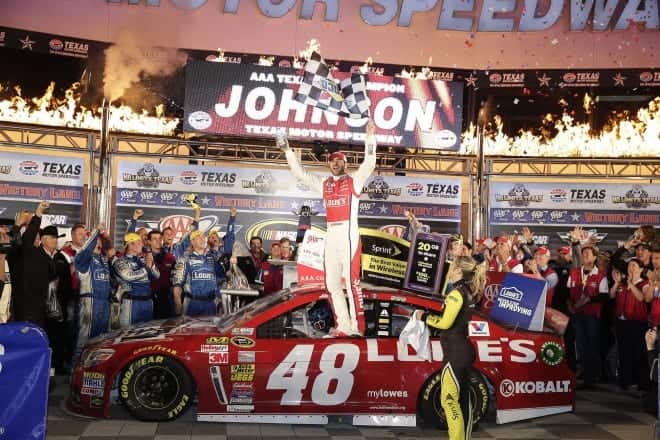 For the second time during the Chase, on-track contact has led to a post-race fight. The one common denominator: Brad Keselowski. This time, Keselowski made a bold three-wide move between Jimmie Johnson and Jeff Gordon which resulted in a cut tire for Gordon and a 29th place finish. Understandably, Gordon was upset after seeing a potential race-winning run and a guaranteed spot at Homestead wiped away. Gordon now sits fourth in points, on the verge of being knocked out of championship contention with one race remaining in the Eliminator Round. Oh, and by the way, Jimmie Johnson won the race. This is the second consecutive race won by a non-Chase contender which means that at least three of the final four positions at Homestead will be based on points position.

It was a 50/50 day for the eight remaining Chase contenders. Harvick, Keselowski, Edwards and Hamlin finished in the top 10 while Logano, Newman, Kenseth and Gordon did not. Much the same for the top 10 in Power Rankings after Martinsville. Half of the drivers (Harvick, Keselowski, Kyle Busch, Earnhardt Jr. and Hamlin) had top-10 finishes while the other half finished no better than 12th (Joey Logano).

One race remains in the Eliminator Round before the final four are set for a showdown at Homestead. Before we head west, see if your favorite driver made the top 15 after Texas.

How in the h**l does Gordon drop four spots? He had the best car at Martinsville, and had the race won at Texas until NASCAR threw that unnecessary caution for Bowyer hitting the wall with NO debris left on track. Gee, that’s a surprise, Bowyer hitting the wall while Gordon running for the win. Jeff drops to fifth in the rankings because a MOROM decides to take him out? I’m a Gordon fan and at first thought that Jeff had as much to do with the contact as Brad did, but then I watched the video. YES, look at the video people, Gordon starts his turn into turn one and the left front nose of Brad’s car is still at JJ’s right rear bumper. Brad forced the issue and didn’t care what the consequences were. That hole WAS NOT there. Brad drove in straight and Gordon started to turn into the corner. There would have been no reason for his spotter to tell him Brad was there cause Brad was still behind JJ. Any spotter would’ve thought Brad was going to follow JJ into the corner and not shoot up the track to make a hole and run into Gordon.

I read the description of how y’all calculate these rankings. My only thought is that this week the crack pipe played a role.