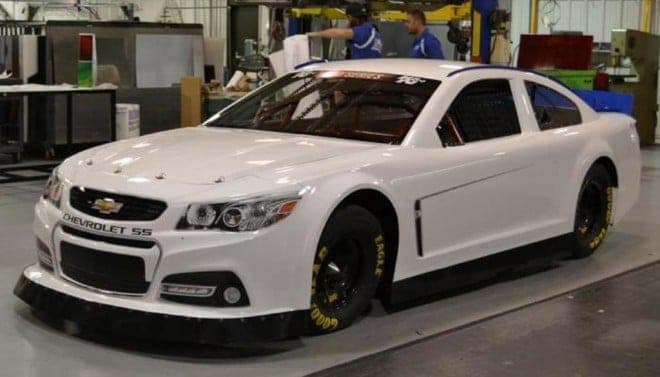 The new body features panels made from a composite laminate blend that are bolted together in a new 12-flange design. The body will replace the steel-shelled cars in a design that’s 35 pounds lighters and closer to the NASCAR Xfinity Series and Sprint Cup Series bodies.

“I don’t get too excited to debut too many new cars, but this one, with a red chassis and the white body looks like a show car,” Mike Greci, K&N East Series Director for Turner Motorsports, said. “Tony Glover (NASCAR Touring Series Technical Director) and Brad Moran suggested that we should just take it right to Barrett-Jackson and run it right across the auction block. It’s that pretty.”

Greci also adds that it is a good move for the team as “in the long run, it’s going to save teams a bunch of money” with prep and repair costs cut in half. This is because the new design allows teams to simply bolt on a new one, rather than having to cut and weld together body panels, as they did before.

“The way it bolts together, cars will be much friendlier to repair, either in tact or by reattaching panels,” Greci continued. “The way the flanges work, they either butt up at a seam or overlap a seam. But there are no exposed bolts. Everything is inside. Our car for Las Vegas is painted, but if you wrapped it instead of painting it, you wouldn’t even see the seams.”

Beyond making the car better for the team, it also includes some key safety aspects.

“First of all, it’s made from flame-resistant material,” he says. “The greenhouse is very well constructed. There are tethers to keep the hood from flying off, insets for windshield center braces, really a lot of safety improvements.”

The new car will see the race track for the first time at the 2015 season opener, which is February 6-7th at New Smyrna.

“Based on our tests, I don’t know if the new car will really go faster, but it does look more modern,” Moran says. “It’s a big leap forward for the series in terms of aesthetics.

“By elevating the quality of the car with a look that’s more up-to-date – more what you see on the street and with a look that’s almost identical to the Sprint Cup body that fans see racing on Sundays. – I think it elevates the entire series.”