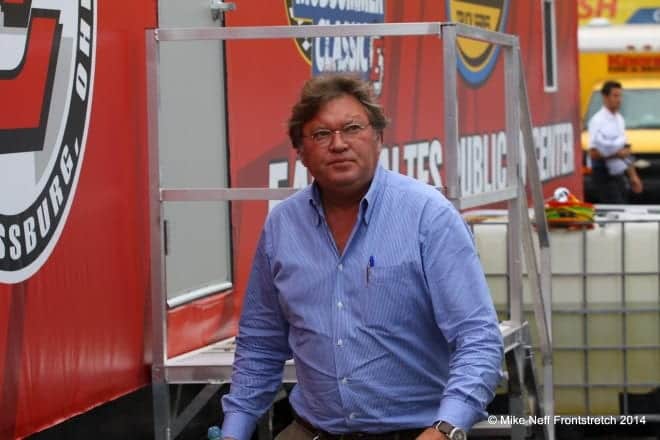 Then they spent Monday afternoon analyzing the video to dish out penalties for it.

After all, that type of behavior can’t be tolerated – even if it’s exactly what NASCAR wanted, creating one hell of a strange disciplinary policy. It’s kind of like telling two children that there is a delicious piece of candy between them and they should use any means necessary to get it, cheering when one pushes the other one to get it and then disciplining the child for the push. No candy for a month, self-induced drama for… what?

NASCAR executives are the candy placers in that scenario. They manufactured the desperation Sunday and they’ll dole out the consequences of desperate decisions this week. Brad Keselowski’s move, calculated as it may have been was all desperation. After a mechanical failure caused one bad finish, Keselowski’s six wins and consistency this season counted for nothing. With that one bad finish in the new Chase format, Keselowski knew he wasn’t going to make up the points to advance. He had to win at Texas or Phoenix, otherwise what appeared to be a championship-caliber season was going to be cut short before Homestead-Miami Speedway. So Keselowski saw a small gap between two cars he knew were faster than him on the restart, then took the only chance he thought he had to win the race.

Be mad at Keselowski if you wish, but he’s a product of his environment – as is Jeff Gordon. After a second-place finish last week, Gordon was sitting pretty on points regardless of a first or third-place finish Sunday. Then, in a split second a desperate driver cut down his tire and he ended up 29th, turning Gordon equally as desperate. That’s what triggered a side of this 43-year-old we’re rarely seen before.

Welcome to the new NASCAR, where one flared fender into a left-rear tire can take the championship leader nearly out of the championship altogether in an instant. One bit of contact can derail 33 weeks worth of perfection. Who can blame Gordon for losing his mind? If you worked tirelessly at something for a year and had it stripped from you, almost instantly you might lose it too.

Phoenix might end up resembling Wrestlemania; NASCAR should set up some tables, ladders and chairs on pit road next to the cars after the race. Of course, NASCAR would also tell everyone to stay away from the stuff beforehand.

That’s all the Chase is at this point: stupid entertainment. The majority of sports fans who didn’t tune in Sunday — an audience NASCAR is targeting — only saw a bar room brawl Monday morning when they turned on SportsCenter. It didn’t matter that Jimmie Johnson won. I’m not sure if that was even mentioned.

The top stock car drivers in the world were shown as crazed animals for the second time in three weeks, and the people cracking were  two of the sport’s most respected: Kenseth and Gordon. If they can lose it, can’t anyone? Keselowski’s been the main target, but it easily could’ve been someone else. Harvick looks like he is ready to hit somebody. Maybe it’ll be his turn at Phoenix.

The hostility and violence isn’t going to stop, that’s for sure. There is a championship on the line and there is no room for making up for other drivers’ mistakes like there was in the past. Everybody is desperate for the trophy, and the rules do nothing to calm someone’s nerves.

How can you find relief? Drivers are told not to use their cars as weapons, to spread messages during these stressful times so they resort to fists on pit road or in the garage. But oh, wait, that’s not allowed, either.

“You shouldn’t punch somebody,” Robin Pemberton, NASCAR senior vice president of competition and racing development, said in a release afterward.

But isn’t that what NASCAR wanted in the first place? Why else would they implement this absurd format that has Ryan Newman in position to become champion? I doubt Newman is the ratings booster the sanctioning body was in search of – the tension it’s manufactured between drivers is.

So, it only makes sense that NASCAR officials penalize everyone involved, while dancing to the SportsCenter clips on the TV behind them.

I don’t know about you, but I’d sure like to punch someone.

..calling Brad “desperate” because he wants to win is not a product overall of this stupid new Chase format. Seeing how Brad always races, why is this accepted and right move now a “desperate” move? He did what he is paid to do. And Jeff’s reaction as well I would not interpret of a desperate move. How about this format gives one permission to behave badly. How can you lump the idiot Harvick’s actions in as justifiable..it wasn’t and never will be. This was racing…but I am not absolving Nascar, they will act shocked and horrified, their reasons are not the reasons you stated. Nascar is just clueless and think any publicity is good publicity, I never understood that and never will, guess that’s why I am not a marketer or in sales. To have Robin P. indicate that dragging someone around is acceptable but not punching isn’t…shows how off they are. What did they think was going to happen with a mob mentality? Did any of these clowns take basic courses in their community college?

Totally agree with you Brett. This new Chase system has turned into a farce. Keselowski did what ANY driver would do in order to win the race. That is what he gets paid to do. Gordon is just a crybaby because he didn’t win. Harvick had NO business getting involved to begin with. HE should be fined more than anybody. I predict that no points will be taken away from anybody and that there will be monetary fines. Keselowski didn’t do anything wrong on pit road. He was trying to walk away from it all when that moron Harvick came up and pushed him from behind.

Thanks for saying we’re all thinking, Brett. This new format sucks. I can’t help but wonder what the last few races of the seasons would have been like if we had this elimination format during the years when Yarborough, Waltrip, and Earnhardt Sr. were in their prime.

Am I the only one who finds it ironic that Harvick says Keselowwski should “fight his own fight” and then blindsides Brad from behind? What a coward. All bluster and bravado. I’ve lost all respect for him.

This is the BEST article summarizing the state of NASCAR and why are seeing what we are seeing that I’ve read anywhere.
Thanks Brett for putting into words what I couldn’t.
This new system creates a condition where desperate drivers take unwise risks and these ridiculous post race confrontations (that make the sport look like a Jerry Springer episode) are the by-product.

NASCAR may eventually get ratings and attendance to rise but it won’t be sports fans watching, it will be the same people that watch those stupid reality television shows. I can’t tell you how disappointed and disillusioned I am with the current state of NASCAR. From the fact that there can be 14 guys on the lead lap with 100 laps to go and then by 20 laps to go there are 28 cars on the lead lap, to the new chase system that fosters luck over performance and bad behavior, it just isn’t the same girl I fell in love with. Divorce proceedings may be forthcoming.

Brett, you summed it up completely. NASCAR created this scenario, they are enjoying the heck out of it but they also want to pretend that they are horrified by it. As you say the fans who watch every week know what the deal is, the people who are only seeing a clip on SC have no idea but wow, look at those crazy people who race NASCAR.

Robin Pemberton is an idiot IMO. He likes to blame the fans and everyone else as long as it deflects the real issues from being discussed.

right now trending on twitter is a new term “harvicking”. Yeah, NASCAR is reveling in it and most fans are pretty darn annoyed by it all. This is NOT the way to determine a season champion. It might be “interesting”, as Jeff Gluck termed in on twitter when he was getting set to write his article, but it is not even close to rational or fair.

The best demonstration of why this new ‘one race champ’ iteration of the obnoxious ‘chase’ is what is happening on pit road. You put desperation in front of these teams, watching an entire season of work go down the drain with one flat tire or mistake by another driver, and this is what you get…the melee and the need to blame someone…anyone, for ending your season. Harvick played it cool…Brad is on probation, and if he can get Nascar to fine or punish him with points, that’s one less fast car Harvick has to race at Homestead. I also find it amusing that every driver (except Matt Kenseth) who is so appalled by Brad;s driving style, has done the same or worse themselves. Only when THEY do it, it’s just hard racing. Maybe Jeff should have tried to hit his spotter for not letting him know Brad was on his inside so he wouldn’t come down into him.

If any driver is surprised at Brad’s ‘take no prisoners’ style, they haven’t been paying attention. Maybe if his car was black….

The only time the local sports stations spent on Nascar yesterday was to laugh •AT• Nascar. It’s a joke.

But the REALLY funny part is that France and company think it’s on the same level as the NFL, MLB, NBA, or even the NHL.

I will always remember Harvick going after, of all people, Ricky Rudd. Right out of the blue he went for him. Since that time I really have no interest in him as a driver. My son-in-law, whom I got involved in NASCAR thinks this is great fun. However, I have never in my life seen a motor sport contest where someone who never won a race could be crowned as Champion. Rather sad. Someone who wins six or five races over the season is not a contender. I hope JJ wins the last 2 races, even though I am a great fan of him, just to pour sour milk down the backs of this elite NASCAR front office.