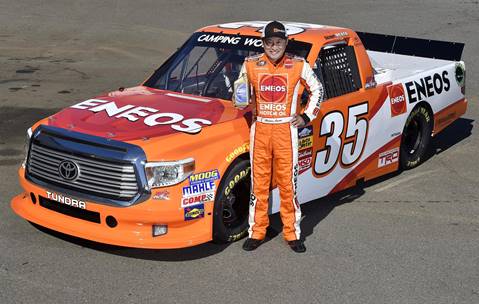 Win-Tron Racing announced on Wednesday that they have signed 41-year old Akinori Ogata to drive the No. 35 Toyota Tundra in Friday night’s Lucas Oil 150 at Phoenix International Raceway. Ogata will be making his Camping World Truck Series debut.

For Ogata, the opportunity to race in one of NASCAR’s National series is huge.

“I’m very excited about making my NASCAR Camping World Truck Series debut at Phoenix,” Ogata said in a press release. “We haven’t set any expectations for the race. We know we’re in the race, but I have a lot to learn. I just want to get familiar with the truck and keep improving with every run we make and (every) lap turned. If we have a good showing at Phoenix, the doors will open for next season allowing me to continue and expand my (NASCAR) horizons.”

However, the Japanese energy company first entered the Nationwide Series late in 2013 as the primary sponsor for KH Motorsports’ No. 92 and driver Dexter Stacey. Stacey failed to qualify at Phoenix in ENEOS’ distinctive orange, red and white colors. Earlier in the year, ENEOS signed a two-race sponsorship deal to sponsor Kyle Larson’s No. 42 Chevrolet for Turner Scott Motorsports. Larson proceeded to win the History 300 at Charlotte Motor Speedway on debut for the sponsor.

Ogata has a decent amount of experience in stock cars. He has 12 career starts in the K&N Pro Series East. His best career finish is a 15th at Gresham Motorsports Park. The finish occurred during his series debut in 2012. In his three races in 2014, Ogata’s best finish was a 22nd in the Autolite Iridium XP 150, the second East-West combination race of the season at Iowa Speedway. Prior to his K&N Pro Series experience, Ogata raced as part of the NASCAR Whelen All-American Series.

It should be noted that Ogata will not be the first Japanese racer to compete in the Camping World Truck Series.  That honor went to Kenji Momota, who drove a No. 71 Chevrolet owned by Randy MacDonald in the GM Goodwrench/Delco Battery 200 at PIR in 1995.  In addition, current owner of HRE Motorsports, Shigeaki “Shige” Hattori, drove ten races for Arnold Motorsports in 2005 in a No. 9 Toyota sponsored by Aisin.  Hattori’s best finish was 24th at Kentucky.