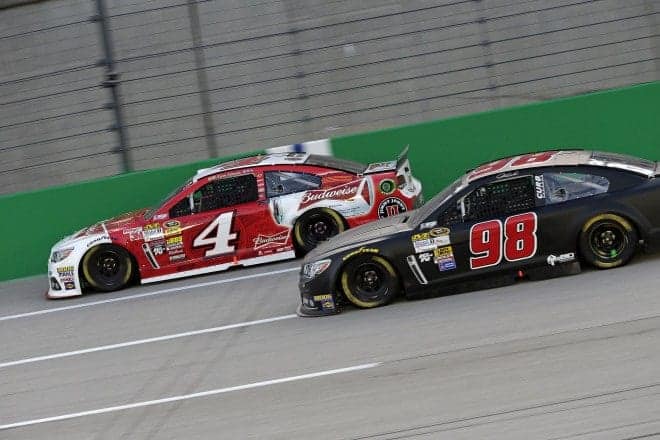 If you picked Jeff Gordon last week at Texas, with just a few laps to go you thought you had it made. He had a comfortable lead and it all looked good for him advancing into NASCAR’s version of the Final Four and for your fantasy team that day. Then, after his old buddy Clint Bowyer spun to bring out the yellow, it all went bad. I’m not insinuating the Bowyer spun on purpose to bring out a yellow this time, but it sure seemed a bit ironic at the very least.

It’s just an example of how quickly things can go from good to bad, or bad to good on the track and for your fantasy team. On the other end of the spectrum, Carl Edwards had toiled back in the mid-20s for much of the day, but all of the late yellows allowed him to get back on the lead lap and then salvage a very respectable ninth-place finish. So that was a bit of good news for some fantasy owners, too.

This is a classic case of how the new Chase format can affect your fantasy team. And just like the real-lifers in NASCAR, all this comes at the most important time of the season for your fantasy team. Drivers you have been relying on all season, could become victims, and possibly innocent victims, of more Chase shenanigans.

So, yes, many things can happen here, either good or bad, that will be out of the control of one or more of the drivers you have picked.

But if you’ve had a successful season and are trying to wrap up a title, the only choice you have is to keep going with the drivers, or the same strategy, that has put you into position to win with two races left.

It looked like for much of Sunday’s race that Kevin Harvick would be in a win or get booted from the Chase position for Phoenix, even though he was contending for the win. But the late-race shuffle leaves him only six points out of the fourth and final Chase spot and now he has reason to feel good about his team’s chances to make it through to Homestead.

That’s because in the last five races at Phoenix, Harvick has won three of them and that includes the first Phoenix race in 2014, which took place way back on March 2. There’s been a lot of water go under the NASCAR bridge since then, and a lot of other stuff too. Harvick’s wins at Phoenix have not been flukes either as he has led a series high 397 laps in those races. He also has four top fives in those races and his worst finish has been 13th.

Phoenix is also not a bad place for Gordon, who has a one-point cushion while sitting in fourth in the Chase standings. Gordon finished fifth in the March race at Phoenix, but the bad news for Gordon fans is that was his only top 10 finish in the last five races there. The good news for the Gordon Nation is that in his 31 career races there, he has 21 top 10 finishes including two wins. And given the fact that he can see a fifth title now, Gordon will be more intense than ever behind the wheel this week.

A driver who will be intent on winning even though he is not in the Chase is Jimmie Johnson. And he does have this thing about winning two races in a row as it happened once earlier this season. Johnson has four career wins at Phoenix and has led an active-driver high of 931 laps in 22 career races there. He also has 18 top 10 finishes in 22 races, including a sixth place finish in March.
Another non-Chaser, who also happens to be another Hendrick driver, who has to be considered a threat this week is Dale Earnhardt Jr. He finished second in the March race and also has three top five finishes in the last five races at Phoenix. Junior also has two wins in 24 career races at Phoenix and it will be no surprise is he is contending again.

And just in case you are wondering, Brad Keselowski does not have a win at Phoenix, but he does have three top fives and another top 10 finish in the last five races there, including a third in the March race. So you know, it’s not inconceivable that he, Gordon and Harvick could be running close to each other at some point in this race, which could well lead to a lot more shenanigans this week, too.

Let’s start with Edwards in this group as like Harvick, he too went from a must-win situation to now being just one point behind Gordon for the coveted final spot. And like Harvick, he too is quite comfortable coming to Phoenix. Edwards has two wins in his 20 career races at the desert track, including one in the last five races. In those five races, Edwards has led 159 laps, third most behind Harvick and Kyle Busch. And Edwards was eighth in the March race, so he has reason to be optimistic heading into this week.
And what about that Kyle Busch at Phoenix? He doesn’t have a win in the last five races, but he has led 289 laps, so victory is certainly a possibility for him there. He finished fourth in the March race, but did not lead a lap in that one. For his career, Busch has two wins at Phoenix and 12 top 10 finishes in 19 races, so he certainly can be a threat as well.

A driver who certainly has not been dominant in the Chase, but finds himself sitting tied with Joey Logano atop the standings is Denny Hamlin. He also has one win in his last five trips to Phoenix and three top-five finishes in those races while leading 125 laps. Hamlin had a 13-point cushion over fifth-place, so if he can finish 10th, like he did in the March race, or better, he will be in good shape to make the Final Four at Homestead.

Logano has the same amount of breathing room and the question will be whether or not he needs it? Logano has three top five finishes in the last five trips to Phoenix, including a fourth place in the March race. He has led 104 laps in those five races, so especially with the way he has run in what has been a breakout year for him, it would be no surprise to see him up front for most of the day as well.

Even though I used all of my picks on Kyle Larson, I was a bit surprised he didn’t contend for the win at Texas. So, now, he has just two races left to get a win in his rookie season, something that I thought would have happened by now but hasn’t.
So can it happen at Phoenix? The only thing to go on is that Larson finished 20th in the March race at Phoenix. Now, for the most part, he has been much better his second-time around at tracks, so he could very well contend this week. Larson did qualify eighth in the spring race, so he does know how to be competitively fast at the track.

The other usual suspect here is Austin Dillon. While Larson has pretty much wrapped up the rookie of the year honors, Dillon has shown some improvement as of late. He was contending for a top 10 spot last week before the late race incidents left him at the end of the lead lap with a 21st place finish. Dillon finished 24th in the March race at Phoenix, so it will be interesting to see if he and the No. 3 team will improve on the second time around at Phoenix as well.

The one interesting name on the entry list for this category this week is the Austin’s younger brother, Ty, who will be in the No. 33 car. If you think he can pull out a top 20 finish, then maybe he is worth taking a look at. But he is more than likely looking to get some experience and laps in his second Sprint Cup start and try not to do anything to hurt any of the Chase drivers.

And lastly, just in case you can’t use either of the Dillons or Larson, Danica Patrick does have one top 20 finish in four career races at Phoenix, a 17th. She was 36th in the spring race and since she will be in her second race with a new crew chief, it’s not realistic to expect major improvement this time around.

The overall leader in the Frontstretch League on Yahoo! remained NoBarNASCAR with 9,117 points followed by LeftTurnOnly at 9,033, L&M at 8,887, Mojothemonkey at 8,886, Djarum Racing at 8,831 and ShadowsPT at 8,827. The biggest movers in the standings this week were DKcrasher and Bomb Squad each improving eight spots.

I admit, I root for Danica, like a Leafs fan really – high hopes but zero expectations, but the idea she is a dark horse in this race is silly. At best a mule.