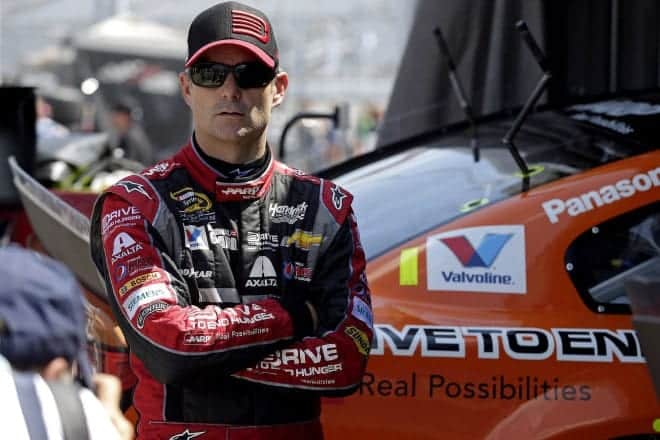 So this is what NASCAR wanted, eh?  Joey Logano, Denny Hamlin and Ryan Newman duking it out at Homestead for the championship.  There’ll probably be another driver there too, like Matt Kenseth, or Carl Edwards.   Then, when one of these drivers hoists the big shiny trophy everyone will collectively yawn and find something else to watch.

Oh, right, there’s still that Phoenix thing to get through but hasn’t everyone noticed that the standings heading into the race are a bit baffling.  Sure, Logano deserves to be there but Hamlin and Newman have hardly set the world ablaze and aren’t exactly drivers that are going to draw in the mega-interest from the sporting world.

Those drivers, however, don’t exactly have what one could call breathing room.  Logano and Hamlin both share a 13 point boost over the cut-off line but that could be the equivalent of a loose lug nut on a pit stop.  That the man in last right now, Kevin “The Instigator” Harvick is just 18 points from the lead really means that Phoenix is a free-for-all in more ways than one.

Sure much of the attention in Cup has been placed on the post-race squabble at Texas and how it might affect the upcoming race.  That none of the drivers even received fines tells you something about NASCAR’s mindset (basically giving the incident a big rubber stamp of OK).  Because what NASCAR would really love to see is more of it, with Brad Keselowski and his me-against-the-world attitude fighting off the likes of Hamlin, Jeff Gordon, Harvick, and maybe Kenseth.

What’s likely to happen is that the drivers will race clean…until one of them knows he’s out of it.  Should that happen, then the fun might begin.

Happiness indeed.  Just a few more of these left in the season, get your griping in now…

Happiness Is…Jeff Gordon.  Whether or not Gordon would have grabbed for Keselowski had Harvick not inserted himself into the situation is a hypothetical left for someone else.  What we do know is that Gordon was, well, to be blunt, pissed.  Understandably so.  That the yellow flag came out for Bowyer’s wreck with two to go was one thing.  Then there’s the restart debacle.  And then, hello 29th place finish.  From first to 29th in four or five laps.  Brutal.  That was a ticket-punching race gone awry.

What’s awesome about Gordon is that these late-season meltdowns are seemingly the norm at this point.  Texas: Gordon v. Jeff Burton.  Phoenix: Gordon v. Bowyer.  Texas: Gordon v. Keselowski.  There’s something about the long season and the misery of not earning that fifth championship that sure seems to get to Gordon by the time the leaves start falling from the trees.  Much has been made of Keselowski’s attitude, but maybe some more scrutiny should be placed on Gordon’s – maybe the two are more alike than people would care to notice.

Happiness Is…Keselowski.  At this point, Kes has moved into the role of being the most polarizing figure in the sport.  Hamlin’s comments this week paint Kes as a driver who isn’t well liked or respected by those in the garage.  The fans seem to be having difficulties with him as well, which can be noted by the rather vociferous response of negativity when he’s announced during driver intros.  Whatever.

Once again, it’s better when he’s in it.  If he were eliminated it’s doubtful that he’d be drawing this much ire and the sport might be more peaceful (read:boring) and thins would be progressing towards a ho-hum finish.  But at this rate, Kes makes things must-see TV.  Like him or not, it doesn’t matter, as long as he has a chance he makes people watch.  Now that he’s got so many people putting targets on his car (no, it’s not new sponsorship) it makes him all the more compelling.  Now, could we just get rid of the comparisons to Dale Earnhardt Sr.?  Kes is more like Darrell Waltrip, an agitator, not really an itiimidator.  Still seems to work though.

Happiness Is…Not Procrastinating.  As the Christmas season approaches, it’s best to get your shopping done early.  (By the way, are the decorations up everywhere you go already too?  Is it now the 60 days of Christmas or what?!)  Now’s the time to avoid parking lots, lines in stores, and all the rest of the joy of the season and then relax as the holidays kick into full force.  By not procrastinating you can enjoy a happy and less-stressed month.  Or if your Chase Elliott, you can go into Homestead knowing that you’ve already locked up the championship and can race worry free.

Elliott’s 48 point gap on his teammate Regan Smith is pretty much insurmountable and bodes well for getting the champion moniker placed aside his name.  All it takes is a decent finish and it’s good to go.  In the truck series, Matt Crafton holds a 23 point lead heading to Phoenix.  That’s not huge but it’s pretty comfortable and Crafton has been strong all year.  Darrell Wallace, Jr. almost made things interesting last weekend, but when his motor blew, that was that, and Crafton now looks to be heading to back-to-back champsionship.  Sure, looks good for Elliott and Crafton to wrap things up this weekend, good for them.  Which means NASCAR will probably make some kind of Chase for both those series for next year.

Happiness Is…COTA.  Beautiful track.  Sure, none of the NASCAR series will probably ever race there, which is probably for the best since the rides don’t seem fitting for it, but it still looks like an awesome place.  Now, if IndyCar could just figure out a way to go there.  Oh, and a golf clap to Lewis Hamilton for winning last week’s F1 race, his second at COTA.

Happiness Is…Phoenix.  The track out there in the desert isn’t exactly one that people circle on the schedule and say: $*&^ yeah, Phoenix!  But with the how the Chase has gone, it may be a great track for prior to the championship race.  It’s big enough for some speed but small enough to have drivers bang around a little.  With flared side skirts being all the rage these days (how have more people not gone off about that aspect of the cars right now???), defending ones tires might be as important as anything else.  Looking forward to this over-adrenalized nutjobs taking the track on Sunday.

“What’s likely to happen is that the drivers will race clean…until one of them knows he’s out of it. Should that happen, then the fun might begin.”

Despite all the discussion about who is going to take out who at Phoenix, I believe this statement by Huston is more likely. If you punt someone Sunday, you had best destroy their car beyond driving (and their teammates, too!). Or, you will constantly be looking over your shoulder the rest of the day waiting for your payback. Now, if it comes down to the last few laps and the opportunity is there? That might get interesting but, I would be very surprised to see an intentional shot taken early by a driver who is still in contention. Moreso, I expect this race to be another Harvick runaway with very little drama at all. And, I don’t like Harvick at all.

“I didn’t give, … Yeah I could have, but hey man it’s the last lap. Sometimes earlier in the race you’d roll out of the gas and step on the brake and let him have the lane, but I had the lane and he wanted it and not on the last lap.”

No, not Brad Keselowski. Jimmy Spencer.

Ok Carl, you convinced me? I’ve changed my mind about the Gordon/ BK incident. I mean if Jimmy Spenser said it, it is good enough for me.

I was reading comments on another site, from a journalist who had spoken with a championship contender who said all the other drivers don’t like Brad because he doesn’t adhere to the driver’s code, which apparently includes not going for a hole to pass unless there is at least 10 feet of clearance on either side of your car (not making this up) . Is there any wonder why the races are boring parades? I despise dirty driving…literally wrecking someone else to gain postion…but door to door contact, and hard racing should be the norm, not the exception. thank god there’s at least one driver in NASCAR who gets that it’s about winning, be it a race or a championship, and isn’t concerned just with logging laps in a polite manner until cashing that big ole paycheck