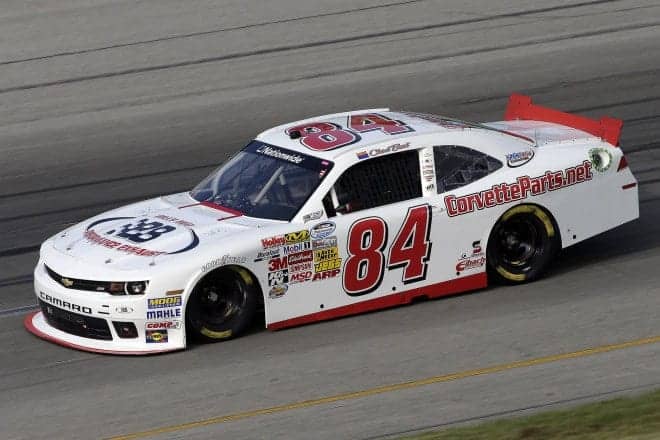 When people think of the last name Boat, Billy Boat usually comes to mind – as in, the former IndyCar Series driver, who won five consecutive pole awards in the 1998 season in AJ Foyt’s No. 11 car.

However, there is a new Boat in town: Chad Boat.

Unlike his father, Boat has taken a different route in his motorsports career. After racing sprint cars and midget cars, he worked his way into stock car racing. Now, he is a driver in the NASCAR Nationwide Series, and doing so while driving for his father.

“We just looked at where I was as a driver and that I needed to take that next step,” Boat tells Frontstretch. “He was willing to take that step as an owner in the Nationwide Series and I was willing to as a driver. It was the natural progression for us with the partners that we had on board. Our ultimate goal is making it to Sprint Cup. We might try doing some Truck stuff possibly. With what I learned this year, I think I can apply it to any situation that I am in within the future.”

Thus far, the Boats have run 13 races. His best finish was a 22nd-place result at Iowa, but his average finish is is 28.1 with six DNFs – five of which have come from wrecks. But the Sunoco Rookie of the Year candidate has followed his father’s path as a solid qualifier, especially since he needs to race his way in on most weekends.

Although there have been some bright spots such as racing at the famed Daytona International Speedway and Indianapolis Motor Speedway – a track where his dad won the 1998 Indianapolis 500 pole award – 2014 has certainly had a steep learning curve for Billy Boat Motorsports, which also fields a newly formed truck in the Camping World Truck Series.

“I always push to do better,” Boat says of his 2014 season. “Overall, I think myself and the team have learned a lot. It was a big jump for me from ARCA to Nationwide. It has been a big step and we have learned a lot bringing on Mason Mingus in the Camping World Truck Series. That has been a big help for the team by bringing in more information. We’re just trying to keep on building and work towards doing better next year.”

Coming from the ARCA Series with no prior experience in NASCAR’s second-tier division entering this year (or even the Truck Series, for that matter), Boat has struggled to get adjusted to heavier, more powerful vehicles. He says the biggest difference has been adjusting the splitter to make sure it is not hitting the track. Being accustomed to the front valance on the ARCA and K&N Pro series cars, he has been in a year-long class on how to wield the machines that is going to continue into 2015.

The team has also been using Jeff Collins Racing Engines under the hood. Now, they have acquired an ECR engine – something that they believe will significantly improve their performance.

Dan Deeringhoff, who has been working with Boat since last year, has also made a difference in the team’s performance. In ARCA, the pair recorded three top-5 finishes – each of which came at intermediate tracks. This season, there have been only a handful of tracks that the No. 84 Chevrolet has visited that are under one mile.

“Dan and I ran well overall in ARCA last year,” Boat explains. “There have been times where we have both been frustrated, but we try to improve each week. We try to build on from the notes that we have from past weeks. I don’t know if there’s any formula for how we attack each weekend. I think we are still looking for that magic.”

Though they have a solid relationship, this team has some work to do going into next year. It isn’t sure what its plans are; however, Boat believes he’ll be racing an expanded schedule in the newly renamed NASCAR XFINITY Series. Billy’s company, Billy Boat Performance Exhaust – located in Phoenix – has been featured on the car alongside CorvetteParts.net for the majority of the team’s events. Other than that, there hasn’t been much funding – and Boat and co. are already working on changing that for 2015.

With his father’s heavy involvement in his career, Boat has been able to develop a close bond with his dad. Although he travels back and forth from Phoenix to North Carolina, he has made sure to make time for his son. Besides having Billy involved, Chad’s sisters have been his top supporters. Brooke and Emily Boat have been by Chad’s side throughout the season. Brooke has been working closely with the team’s marketing side, and they have spent plenty of time together.

“It’s very special,” he says. “Racing is a family sport, so to have them come and support me every week is something that I’m really grateful for. It’s a hefty investment in me to help me do what I love.”

This small team is capable of doing plenty given the right circumstances. Like his peers, Boat’s goal is to make the jump to the Sprint Cup Series at some point. Moreover, if racing doesn’t work out, he does have a backup plan.

Boat, 22, is a senior at UNC Charlotte. As a finance major, he hopes that could help build his stock if he were to stop racing, but that won’t happen for a while as he continues to chase his dream. But it’s the perfect situation for him. The school, located in the midst of the NASCAR hub in Charlotte, is approximately a half hour from the team’s shop. On a daily basis, he commutes from college to work hands-on with the crew.

With graduation coming up, the priority is making a career out of racing – something that is in his blood.

“We look at every single decal on the car,” he says. “Every single detail is done over. We’re working on each piece to make it better and lighter, whereas if we were a big team – everything would be standardized because there would be so many (cars to build) at a time, they can’t do everything that we want to because you would never get it done.

“I guess there are several benefits to having a small team, but there are a few negatives that we’re trying to balance out as best as we can.”

I can’t believe what happened in this series.