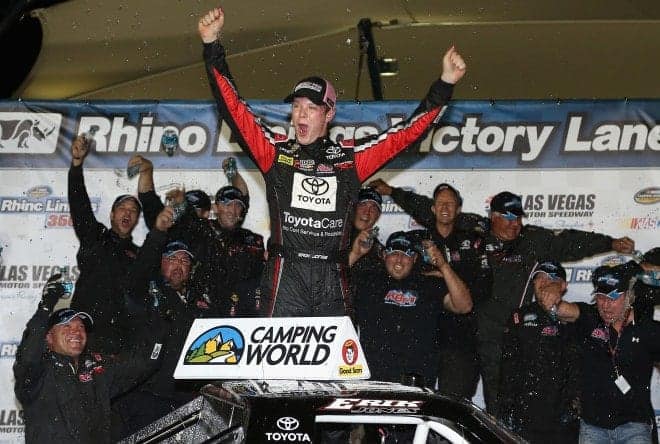 While much of the NASCAR community has focused on the post-race fracas after Sunday’s Sprint Cup Series event at Texas Motor Speedway, the Camping World Truck Series teams have quietly packed up and headed off to Phoenix International Raceway for its second to last race of the season. As the green flag flies over the Lucas Oil 150 on Friday night, there are a few storylines worth paying attention to.

Championship Record in the Wings

In a battle that will almost certainly stretch until the final race of the season next weekend at Homestead-Miami Speedway, the two drivers that have distanced themselves from the rest of the field would make record-setting champions either way. Matt Crafton, the defending champion and current point leader, would become the series’ first back-to-back champion with two conservative runs the next two weeks. But that doesn’t mean the No. 88 team won’t be trying to add another trophy to its collection.

“We finished fifth there last year trying to protect the points lead and wrap up the championship,” Crafton said. “So hopefully we can get a win there this year in front of all our friends and family that come out for this race.”

Meanwhile, Crafton’s competition, Ryan Blaney, who currently sits 23 markers behind, hasn’t shown the same consistency the defending champion has. However, with that said, Blaney has finished of fifth and seventh in his previous two starts at Phoenix, something that could just as easily translate into a trip to Victory Lane. Should he manage to pass up Crafton, Blaney would become the youngest champion in series history at just a month-and-a-half shy of 21 years old.

In order for Crafton to lock up the championship this weekend, he’ll have to leave Phoenix with a 48-point lead over Blaney, something that’s not all that likely since the current margin is just 23. That would mean that Crafton would be forced to finish 25 positions ahead of Blaney this weekend (or 20 with a win and most laps led). The only way that’s going to happen is if Blaney gets knocked out the race in an early caution….

One year ago this weekend, Erik Jones scored his first career win when he led 84 laps en route to a 1.616 second victory over Ross Chastain. Having already impressed in his previous four starts after finishing no worse than ninth, many fans and media alike left Phoenix last season singing the young driver’s praises. In fact, up until Cole Custer’s win at New Hampshire Motor Speedway in September, Jones held the record for youngest winner in Truck Series history.

Fast forward a year and Jones has had another stellar season sharing the No. 51 Toyota with Kyle Busch. He posted a dominant win at Iowa Speedway earlier this season after leading 131 laps and looked like he might cruise to another victory at Eldora Speedway the following race before being involved in separate incidents that left him six laps off the pace.

Combine an average finish of first at Phoenix with the success Kyle Busch Motorsports has seen as a whole this season, and Jones is definitely a driver to pay attention to once again this weekend. And maybe some day he’ll get a shot at running full time for the championship.

Win-Tron Racing announced on Wednesday that Japanese driver Akinori Ogata will make his Truck Series debut with the team at Phoenix International Raceway this weekend. He brings along with him sponsorship in ENEOS, “the corporate brand name of JX Nippon Oil & Energy Corporation, the largest oil company in Japan.”

Ogata, who recently moved to the United States after spending nearly 30 years racing in Japan, has spent his time running short track races throughout North Carolina and ran a handful of K&N Pro Series East races the last three years. In 12 series starts. Ogata has recorded DNFs in half of those events and failed to finish on the lead lap in five of the remeaining six races. His best finish – and only lead-lap result – came in his series debut at Gresham Motorsports Park in June, 2012 when he finished 15th.

“I’m very excited about making my NASCAR Camping World Truck Series debut at Phoenix,” said Ogata. “Competing at this level is not going to be an easy task, but I feel that I’m surrounded by great people at Win-Tron Racing.

“We haven’t set any expectations for the race. We know we’re in the race, but I have a lot to learn. I just want to get familiar with the truck and keep improving with every run we make and (every) lap turned. If we have a good showing at Phoenix, the doors will open for next season allowing me to continue and expand my (NASCAR) horizons.”

Win-Tron co-owner Nate Thiesse has made the expectations for Ogata’s debut clear.

“It’s a pleasure to welcome Akinori and ENEOS to the Win-Tron Racing family,” he said. “This is a huge opportunity for him and all of his supporters. Our goal is to have a productive, respectable race and see the checkered flag on Friday night. If we can do that, we’ve succeeded.”

Love the racing in the Truck Series, but the business model sucks.