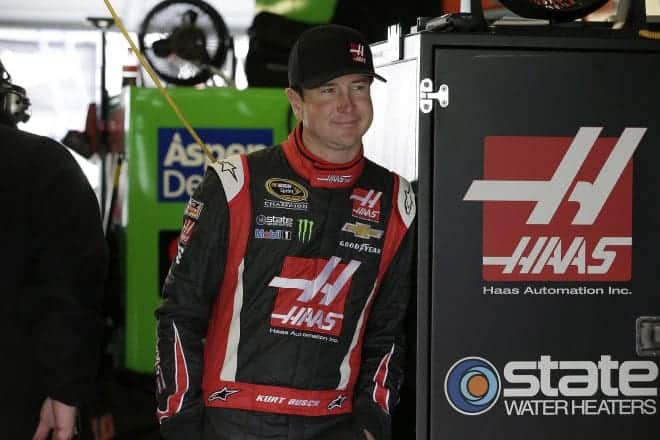 On Friday, the Dover Police Department announced that they have opened a domestic violence investigation against Sprint Cup Series regular Kurt Busch. The investigation stems from an incident that allegedly took place inside of Busch’s motorhome during the most recent Sprint Cup Series race weekend at Dover International Speedway back in September.

According to the Dover Police Department’s release, Busch’s ex-girlfriend, Patricia Driscoll, filed the allegations against Busch on Wednesday.

The documents pertaining to the case describe Busch as acting “despondent” after qualifying for the AAA 400. The AAA 400 at Dover served as the final race of the Challenger round of the Chase for the Sprint Cup. Busch had qualified 22nd for the race.

Upon returning to his motorcoach, Busch was verbally abusive towards Driscoll. According to the documents, Busch and Driscoll had broken up the week before. However, the two still had a business relationship through Busch’s work with the Armed Forces Foundation, of which Driscoll serves as president.

The situation reportedly deteriorated to the point where Busch accused Driscoll of spying on him. The documents then stated that Busch grabbed Driscoll by the face and smashed her head into a wall three times.

Driscoll attested that she got away from Busch and ran to a nearby bus. Once there, she placed an ice pack on her head and neck. Driscoll also claims that severe pain, difficulty breathing and bruising resulted from the incident.

After the news became public, a number of parties released public statements.

Driscoll has not released a public statement. However, the Armed Forces Foundation did post an official statement on the situation to their Facebook page.

“I want to, first and foremost, express the direct support from the Board of Directors of the Armed Forces Foundation to Ms. Driscoll,” wrote Pat LaFrieda, co-chairman of the Armed Forces Foundation’s Board of Directors. “For more than a decade, Ms. Driscoll has been a tireless worker and advocate for our nation’s service members, veterans, and military families. The Foundation will continue working to support service members, veterans, and military families and we ask that Ms. Driscoll’s privacy be respected. Given the serious nature of the allegations, the Foundation has suspended its association with Mr. Busch.”

Busch himself has not commented publicly on the investigation, but his attorney, Rusty Hardin, did release a statement on his client’s behalf.

“The Dover Police Department has been informed that Mr. Busch will fully cooperate with their investigation and he expects to be vindicated when the entire truth of the situation comes to light,” Hardin wrote. “This allegation is a complete fabrication by a woman who has refused to accept the end of a relationship and Mr. Busch vehemently denies her allegations in every respect. At this time, we intend to have no further comment in the media out of respect for the Dover Police Department’s desire to conduct a thorough investigation without a media circus.”

NASCAR, upon hearing the press release issued by the Dover Police Department, released a statement of their own.

“NASCAR is aware of the investigation involving driver Kurt Busch,” wrote Brett Jewkes, NASCAR’s Senior Vice President and Chief Communications Officer. “We recognize the seriousness of this matter and are actively gathering information from all parties, including law enforcement authorities and Stewart-Haas Racing. It would be inappropriate for NASCAR to comment further on this matter until we have more information.”

Stewart-Haas Racing issued their own statement that revealed that the team is looking into the allegations. They are not in a position to comment at the moment.

In another statement, Pat LaFrieda, the Co-Chairman of the Armed Forces Foundation’s Board of Directors posted a statement on the the Armed Forces Foundation’s Facebook page. The statement reiterated their support for Driscoll and expressed a desire for Driscoll’s privacy to be protected. They did announce that due to the allegations, the AFF’s association with Busch has been suspended for the time being.

As of now, the Dover Police Department is still investigating Driscoll’s claims and will not issue any further comment until the time is right. Busch has not been charged with a crime as of yet. Busch will still compete in this weekend’s Quicken Loans Race For Heroes 500 at Phoenix International Raceway.

Well, not to be nasty or anything, but, Brian has desperately tried to compete against the NFL, and turn NASCAR into a stick-and-ball type sport. In doing so, he has destroyed the sport with his stupidity. So now, we have Kurt Busch being investigated for domestic assault. Well, Brian, here is the other side of the NFL, being dropped into your lap! I am always reading about NFL players beating up and raping their wives and/or girlfriends. Now you have Kurt being investigated for beating up his girlfriend. You are getting closer to becoming that stick-and-ball sport! You happy now?