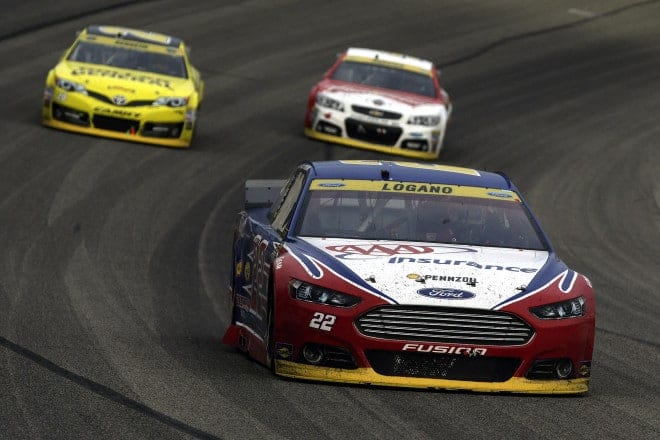 When NASCAR first announced the changes that would be made to the Chase format this past February, I had an idea in my head of how the system would probably play out and what the whole deal would end up looking like. I can honestly say that two post-race brawls were not a part of that vision. And the craziest part is, the Chase isn’t even over yet. The two most important races of the playoffs are still ahead of us, one being today’s race in Phoenix, and there is oh-so-much on the line. All eight championship eligible drivers have a shot at a berth in the final-four race next week; the points are truly that tight. As you can imagine there’s a lot to cover today, so let’s just get right to it, shall we?

Eight drivers, four spots. Pretty simple math when you think about it. This is going to be the main topic of conversation all race long today, whether you like it or not. After last week’s cluster of a race, the points are largely topsy-turvy heading into today, and by my count, there are only two drivers in the top four that really will be able to compete for the title if they make the cut: Jeff Gordon and Joey Logano.

Logano, who is the points’ leader with a 13 point advantage over the cut line, should be safe to advance, barring any major unforeseen circumstances. Gordon should be safe (he has a 1 point advantage) based largely on his week-to-week performance as of late. The other two spots, in my opinion, are up for grabs.

Kevin Harvick figures to be a favorite to get the third spot simply because of his sheer dominance at Phoenix as of late. Harvick is the best driver statistically at the facility and is the favorite to win the race. My guess is that he will do just that, which leaves us with one spot left for Homestead.

As for who that will be? It could quite literally be any of the remaining five. Luck and other circumstances will likely play a role in how that spot is filled, and you better believe that it will be the biggest story to watch today.

Many drivers have been referring to today’s race as being a “wildcard” of sorts in the vein of Talladega. Phoenix has been a strange track in recent years due to the smooth surface and ultra-hard tires that are needed for safe racing on the track, both factors which contribute to a high number of accidents. Restarts also are perilous at Phoenix, as the unusual banked dogleg on the backstretch of the track lends itself to absurd four and five wide racing.

Then throw pit strategy into the mix, and suddenly this race becomes a nightmare for a crew chief. Track position is going to be ultra-important today, and the more defensive and creative these teams get today in terms of maintaining track position, the wackier the final results of the race will be.

All told, keep a close eye on pit strategy and restarts today. As I mentioned in question 1, both could play a role in the outcome of today’s race and seriously jumble up the playoff picture heading into Homestead.

Thankfully, despite a multitude of concerns of the contrary, no team has abusively employed team orders at any point during the 2014 Chase. Well…at least that we know of. With today being arguably the second most important race of the entire season, and with the points being oh-so-close, there is a very real risk that some team, in a fit of desperation, will employ team orders at some point today to gain an advantage a la Richmond 2013.

While one would hope that no team is brazen enough to do something like this, the possibility is still very real, and it is something that bears watching today. Keep a close eye on the teammates of drivers in championship contention today. If there’s any funny business going on, my guess is that viewers will sniff it out rather quickly.

Last week in Texas, we caught a glimpse at the kind of ballsy behavior that drivers are willing to employ in order to make things happen under this new championship format. Brad Keselowski forced a hole that may or may not have been open at the end of last week’s race, effectively knocking Gordon out of the way in the process. With the stakes even higher today, will we see even more drastic on-track moves from the Chasers?

My guess is yes, and they will likely happen on restarts. Phoenix is a heavy-braking-oriented track that breeds contact in the corners. It is a very easy track to employ dive-bombs and brake checks on. The drivers have all said they’d do anything for a championship at this point. The real question is, where will that line be?

I think we will get a step closer to answering that question today.

…It is a crapshoot cause sadly anybody can advance..even the one with the lowest of lows for stats this year. Sad way to say “I am a Champion”, IF it comes to pass.

There is one driver that, if he wins the Championship, the inflation of his already massive ego will be unbearable. Yes, Mr. Hamlin, I’m pointing at you! A winless Champion will prove that Brian’s idea has made a total mockery of this once great sport. As for desperate moves, like Brad’s move last week, I have to laugh. This morning, Sirius NASCAR was replaying an interview of The Felon, and he said that Jeff is racing against someone who has no respect for his fellow drivers. Well, “Mr. Hendrick”, what you said made me laugh! I remember a driver saying once that he wasn’t here in NASCAR to make friends. He was here to win races. He won 76, and 7 championships. Suck it up, “Mr. Felon”!