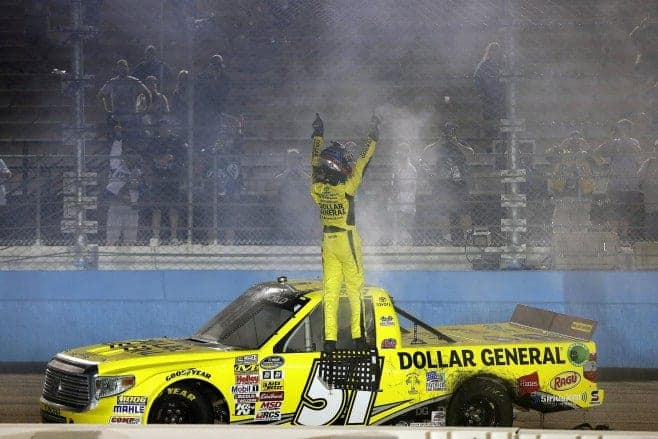 In a Nutshell: In what can only be called a bizarre race, Erik Jones beat out Matt Crafton when Friday night’s Lucas Oil 150 was called 24 laps short due to power issues at Phoenix International Raceway. Jones dominated much of the night, leading all but 12 laps en route to his second consecutive victory at the 1.0-mile oval. Cole Custer, Ryan Blaney and Ben Rhodes rounded out the top 5.

Who Should Have Won: Erik Jones was the truck to beat all night. He started on the pole by more than two-tenths of a second over Matt Crafton and went unchallenged for the lead for the first 91 laps. He went on to lead a second time for a grand total of 114 of 126 laps. Even if the race had run to completion, there’s no doubt in my mind he would have still been the one to make it to Victory Lane.

Before pre-race ceremonies were even completed, Friday night’s Lucas Oil 150 was in a delay when power cut suddenly to a large portion of the track. The lights came back on and went out again a couple times as fans got restless. As it turned out, the problem impacted an area much larger than just the speedway.

PIR has learned there is a major power outage in the West Valley. APS has multiple crews working on it. We will update as soon as possible.

According to the story from The Arizona Republic, “the power outage initially affected 1,900 APS customers in Avondale.” Finally, after a more than hour-long delay, the lights came back on and drivers were called to their trucks for the event. Everything went well until late in the running, the lights once again shut off, this time while the field was racing under green. Not long afterward, NASCAR made the call to end the race, despite power once again being restored.

Late Friday night, the speedway issued a statement relating to the problems experienced.

“We are extremely disappointed that tonight’s race was delayed and ultimately shortened by failures in the local power grid. We want to thank the devoted race fans who stayed throughout the race, however PIR and NASCAR both agreed that it was in the best interest of the drivers to call an end to the race after the second power outage, as safety of the competitors is paramount. While we appreciate the efforts of APS and its repair crews to restore service as quickly as possible, having to end the race prematurely is not the experience that our fans expect and deserve.”

The lights going out before or during a race is hardly an ideal situation, but it’s hard to blame the speedway for a widespread outage in the area. A very similar issue hit Gateway Motorsports Park in 2010, but in that case, a downed power line outside the track forced the Friday night event to be postponed to Saturday afternoon. While it was definitely frustrating to wait out the more than hour-long delay, sometimes there are circumstances out of anyone’s control that come up. Even the most prepared tracks probably wouldn’t have had a backup plan for this one.

Phrase of the Race: Caution Laps

On Friday night, 48 of 126 laps were run under seven cautions, and while that number is high, it doesn’t tell the whole story. Following the significant delay due to lighting troubles, the entire field didn’t even make it past the start / finish line when a chain reaction accident occurred, heavily damaging the No. 05 of John Wes Townley, No. 63 of Justin Jennings and No. 77 of German Quiroga. Bryan Silas was also involved but had minimal damage compared to the others involved.

Following a 17-lap caution for clean up, the field once again lined up, hoping to finally get the evening’s racing under way. But it wasn’t meant to be as the drivers made just three circuits before Bed Rhodes got loose and spun. After that, the field ran just a single lap before Spencer Gallagher got loose inside Timothy Peters and also collected Jeb Burton. Another eight laps were run before Joey Coulter blew a tire and slammed the outside wall, bringing out a four minute red flag for cleanup.

As the field prepared to go back under the green flag, it had run just 13 of the first 45 laps under caution. It was a race that looked like it would never end. Things settled down enough for drivers to complete a 55-lap green flag run before contact between John Hunter Nemechek and Brennan Newberry caused a ten lap caution before Bryan Silas spun just three laps later to bring out the sixth yellow. As noted above, the seventh and final caution flew when the lights went out once again, ending what ended up being the seven lap run to the finish.

Though the number of cautions fell short of exceeding the most in a single race at Phoenix, 48 laps run under yellow breaks the previous record of 46 from the 2007 Casino Arizona 150. It was certainly a race to remember, but not necessarily in a good way.

* Erik Jones’ victory on Friday night marked, the 13th this season by Kyle Busch Motorsports, a series high for single season wins. The previous record of 12 was held by Ultra Motorsports in 2001 when Ted Musgrave and Scott Riggs won seven and five races, respectively.

* In order to become the first back-to-back Camping World Truck Series champion, Matt Crafton needs to finish 21st or better next weekend at Homestead-Miami Speedway. In 13 starts at the mile-and-a-half track, Crafton has just five top 10s and an average finish of 12.8, more than enough to clinch the championship.

* Akinori Ogata made his Truck Series debut on Friday night. After starting 28th, he managed to stay on the lead lap for much of the race, but when the field prepared to go green following a short red flag to clean up Joey Coulter’s wreck, Ogata’s No. 35 Toyota had to be pushed back to pit road because he couldn’t get going. The debuting driver ended up retiring due to rear gear problems and wound up 29th.

* Jordan Anderson also made his first Truck Series start Friday night with MAKE Motorsports. After starting 30th, the 23-year-old made it to lap 105 before electrical problems forced him to cut the night short. He was credited with a 24th-place finish.

* In case you missed the announcement, Erik Jones will run full time for Kyle Busch Motorsports next season in the Truck Series, alongside a part-time Nationwide Series schedule. For more details, click here.

“It’s pretty cool to pick up another win here at Phoenix. Definitely a great way to top off the year for me in this truck. A good way to start the 2015 season. A great Dollar General Tundra. Cool to have them on board. Have to thank Toyota, Joe Gibbs Racing engines, everyone at KBM (Kyle Busch Motorsports) – they do a great job. It’s awesome to break the truck record – 13 wins in a season and cool to be the one that got to do that. Just an awesome night. Wish we could have raced 26 more (laps). I felt like we definitely had a dominant truck and we could have brought it home.” Erik Jones

“I tried something on that last restart and I learned something in the middle of turns one and two and I really, really looked forward to another restart. He (Erik Jones) lagged us back and slowed us down really, really bad coming to that last restart. That’s why he beat me so bad getting down there into turn one, but I learned something down in the middle of one and two and I was looking forward to another restart at the end. I truly believe if I could have got in front of him — right there at the end we were mirroring each other lap for lap — I would beat him a lap and he would beat me a lap. It was going to be exciting if we could get in front of him. I’m tired of finishing second to that damn 51.” Matt Crafton

Well went from 19th to 3rd, truck really came to life after the first pit stop, wish it didn't get canceled, but it was a really long night

“I’d really liked to have raced the last 20 laps. I’m not sure why they called it. I thought we had a pretty good Cooper Standard Ford F-150 there and I thought we could have at least got to second. It was a long night, especially running a lot of yellows and dodging wrecks. We probably ran about 50 laps under yellow so we didn’t have a lot of time to try to get up there but I really wish we could have run the last 20 laps. We didn’t have a lot of green flag racing to go and that just hurt us a little bit. It’s just a shame. We still have a shot at Homestead.” Ryan Blaney

“This was a crazy race. It was tough to get into a rhythm with all of the cautions, and my spin kind of hurt us at the beginning. It was a really good learning experience, though, to restart at the back and have to race my way back up to the front. Fortunately, (crew chief Mike) Hillman and my Turner Scott Motorsports team gave me an awesome truck to do that with. I can’t thank my team, Hillman, Harry Scott and Alpha Energy Solutions enough for their support this season. I’m really thankful for the opportunity to run four Truck Series races with such a great team. I wish we could’ve gotten a win, but at the end of the day, I’ve learned a lot and am really looking forward to what the future holds.” Ben Rhodes, finished fifth

Up Next: The Camping World Truck Series heads to Homestead-Miami Speedway for the season finale next weekend. Last year, Kyle Busch edged Ryan Blaney by a mere 0.081 seconds in a green-white-checkered finish to take the victory and the Owners’ Championship. Coverage for the Ford Eco Boost 200 begins at 7:30 p.m. ET on Fox Sports 1; the race can also be heard on your local MRN affiliate or SiriusXM NASCAR channel 90.

I wonder given growing fan apathy how close this series is to folding? Or can TV revenue alone can keep it going despite viewership in a dead heat with test pattern?

— USED to be a great, fun series to watch when they ran the short tracks withOUT the top dollar Cup invaders feeding their egos