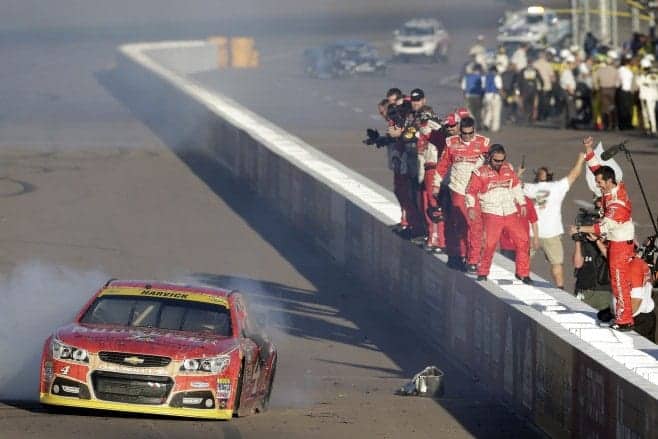 Kevin Harvick put on a virtuoso performance in Sunday’s Quicken Loans Race for Heroes 500 at Phoenix International Raceway and now will have the opportunity to claim his first Sprint Cup Series championship after scoring his fourth win of the year. Harvick was the class of the field all afternoon, leading a race-high 264 laps, including the final 187 circuits to hold off Jeff Gordon by 1.636 seconds. Matt Kenseth finished third, followed by Brad Keselowski. Denny Hamlin, who went a lap down early in the race, rounded out the top 5.  Joey Logano, who came into the weekend leading the standings, finished sixth. Kurt Busch came home seventh, followed by Dale Earnhardt, Jr. Greg Biffle and Marcos Ambrose rounded out the top 10.

“I guess that it’s what it feels like to hit a walk off in extra innings,” Harvick said after the race. “I could tell that we were probably have to win, because everybody was running up at the front of the pack that we were racing against. And that’s really the goal every time we come to Phoenix for me personally, and this team.”

Jeff Gordon saw his storybook run for a fifth championship come up just one point short after Ryan Newman bumped Kyle Larson into the wall to finish 11th and secure a spot in next week’s championship race at Homestead.

”I’m disappointed. I thought if we came out of here second, even if it was to Kevin or Brad, I thought we’d still make it in,” Gordon said. ”That’s pretty disappointing to do all of that and it just makes last week that much more disappointing. I’m going to be thinking about that one for a while.”

Brad Keselowski was another championship favorite that saw on his quest for a second Cup Series championship come up empty after being set in a deep hole following Martinsville three weeks ago.  This elimination serves as a devastating blow for the 2012 champion who had six wins and won a race in each of the Chase’s first two rounds. However Keselowski remained realistic about his hopes coming into the race after the checkers fell.

”We gave it all we had, it was a strong run, it just wasn’t enough to advance,” Keselowski said. ”We did everything but win. We broke down in Martinsville and it was a huge hurdle to overcome and it was probably going to take a win. Fourth wasn’t going to be enough, and we knew that coming in.”

A winless Matt Kenseth and Carl Edwards were also eliminated from the championship battle after finishing third and 15th, respectively.

Denny Hamlin, who won the pole for Sunday’s race and needed to finish 11th or better to guarantee a championship shot at Homestead, had tire issues early on and went a lap down with 240 laps to go. He looked all but finished, however Hamlin was able to rally back to finish fifth – thanks in part to several cautions in the late stages – to clinch his spot at Homestead. Hamlin says he likes his chances once the green drops at Homestead.

”I’m playing with house money now,” Hamlin said. “We’re going to be the underdogs going up against the 22 (Joey Logano) and the 4 (Kevin Harvick) and the 31 (Ryan Newman), but I can tell you there is no give up.  Today is a prime example – look at where we finished after just battling and battling back.  This is redemption and hopefully we’re able to capitalize next week.”

Joey Logano rallied back from a pit road penalty to finish sixth and clinch his spot in next weekend’s championship race. Logano, like Hamlin, had to battle back from a lap down to be in position to advance.

Ryan Newman will be the true underdog in next week’s championship race but has managed to put himself in a position to win his first championship, thanks to a slightly controversial bump of Kyle Larson on the final lap. Newman said it was either do or die in regards to making that move.

“I just gave it my all,” Newman said while standing on pit road. “I wasn’t proud of it but did what I had to to get to this next round. That little boy has got a lot of things coming in this sport and he used me up like that in a truck at Eldora a couple years ago. From my standpoint, I call it even but I think if he was in my position, he’d have done the same thing.”

A look at the Quicken Loans Race for Heroes 500 by the numbers. There were eight lead changes among six different drivers and 12 cautions for 58 laps slowed the race pace to 99.991 mph.

Next week a champion will be crowned as the Sprint Cup Series heads to the Homestead Miami Speedway for the Ford EcoBoost 400. Green flag is scheduled for 3:16 p.m. ET.

What a GREAT system — quickest new track record setting cars are NOT on the pole — winningest driver is NOT even ELIGABLE for a Championship, — loosingest driver IZ eligable — Top running drivers get points taken AWAY periodically, — slower, lapped drivers get reWARDED with laps GIVEN back and unearned points — season long accomplishments mean ABSOLUTELY NOTHING towards a “Season CHAMPIONSHIP” —
Only saw 8 cars covered during the Phoenix race — expect to see only 4 covered next week when they change everyone,s points yet AGAIN because ……………. ???? Sigh!!!