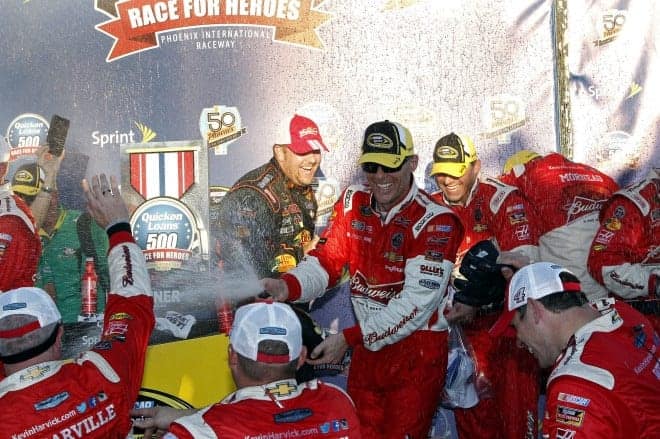 And then there were four. The drivers competing for the Championship at Homestead next week are set, and as the other Chase races have proven, it wasn’t without drama. Kevin Harvick’s only option was to win, and win he did, in dominating fashion by leading the most laps. Denny Hamlin and Joey Logano needed top-10 finishes to advance. After battling back from one lap down, they finished fifth and sixth, respectively. Ryan Newman created the most drama, dive-bombing under Kyle Larson into turn 3 of the final lap, pushing Larson into the wall. That one position was all Newman needed to knock Jeff Gordon out of the top 4 and secure his own place in the Championship Round.

Kevin Harvick, Joey Logano, Denny Hamlin and Ryan Newman will battle for the 2014 Sprint Cup Championship next weekend at Homestead. No matter the outcome, one thing is for sure: NASCAR will have a first-time champion. It is sure to be an exciting race. But, before we head to Florida one last time, see if your favorite driver made the top 15.

You just exposed the flaw in your rating system!! Top 4 drivers in the ranking are the four left in the Chase? Give me a break, not even close!!