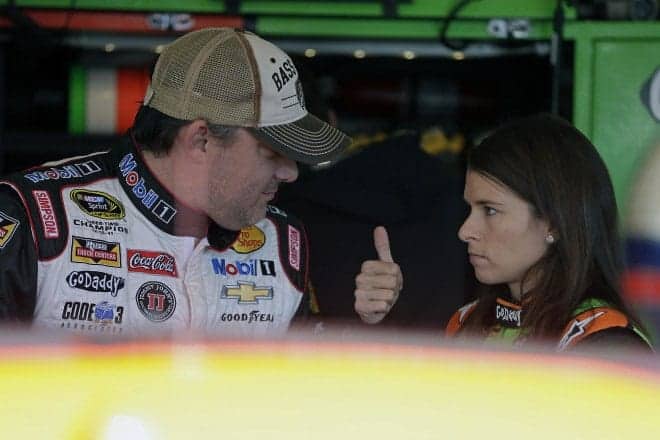 We are down to the final event of the season and sure everybody is talking the so-called Championship Four in Kevin Harvick, Denny Hamlin, Ryan Newman and Joey Logano.

However, unless you have one of those guys on your fantasy team this week, or have had them for the entire season, the fact that everything is riding on this race for them may not mean much to you at all. However, if you are in the thick of trying to win a fantasy championship, or maybe in a league where you get a reward for picking the race winner each week, the fact that it’s the Chase doesn’t really matter to you. It’s really a matter of trying to figure which drivers will finish the best, whether they are in the Chase or not.

So that is something to definitely keep in mind for the 36th and last race of the 2014 NASCAR Sprint Cup season.

I find it a bit ironic, that of those final four drivers, only Harvick was on the Yahoo A list to begin the season. Harvick has done his share to stay there for next year, too, with four wins. But none of the victories in his career have come at Homestead, even though he has been close a couple of times. His best career finish at Homestead is second and he has been eighth and 10th in the last two races there. Harvick has led just eight laps in those two races, so he’s not been dominant there either. For his career, Harvick does have 11 top 10 finishes in 13 career races there, so he’s been very solid at Homestead. He’s also led 136 laps in those races, so he does know what it feels like to have a really good car there. He may get to find out what it feels like to be a champion Sunday night.

One driver who is not in the Chase, but who has won one of the last two races at Homestead is Jeff Gordon. He finished 11th in the other race there. It would be quite interesting to hear the backlash from the Gordon Nation if Gordon, who missed reaching the Championship Four by one spot, did win at Homestead after finishing second last week at Phoenix. For his career, Gordon has 11 top 10 finishes in 15 races at Homestead. He’s led just 83 laps there, including 14 in the last two races, so he’s been far from dominant.

One driver I wouldn’t count out here is Jimmie Johnson. His career numbers at Homestead are solid, but not flashy good. He has eight top 10 finishes in 13 races, but has not won at Homestead. The situation Johnson, a six-time champion, has been in often at Homestead is him coming in with a lead and being protective of it. So it will be interesting to see what Johnson has Sunday when the only thing that will matter to him is winning.

A driver who has been very good at Homestead has been Clint Bowyer. He has finished second and fifth in the last two races there and has five top 10 finishes in eight races there, with a high finish of second. What’s a bit unusual about Bowyer here is that he has led just one lap in his career at Homestead. That makes him another solid performer who hasn’t done anything overwhelming.

One driver who has to be considered at Homestead, Chase or not, is Hamlin. He won this race last year and led 72 laps, so he’s proven he can control in this race. For his career at Homestead, Hamlin has two wins among his five top 10 finishes in nine career races there. A win here would make Hamlin not just a winner, but a champion.

A driver who has raced like a champion at Homestead, but does not have a win to show for it yet is Kyle Busch. He has led 191 laps in the last two races, but did not win either of them. Busch finished fourth and seventh in those two races and much like Johnson, he’ll only be thinking about winning this Sunday.

As for the other Chase drivers here, Newman has four top 10 finishes in 12 races with a best finish of third. He also has led 143 laps in those races, so he knows what it’s like to run up front there.

As for Logano, he has one top 10 finish, an eighth, in five career races at Homestead. But remember for Logano it’s a breakout year for him, so I wouldn’t get wrapped up too much in his past numbers. He’s proven at other tracks that what he did in the past would have little bearing on how he races this year.

One driver who has won every year he’s been on the Sprint Cup circuit is Tony Stewart, but he has not done that this year. So, there would be nothing sweeter for Stewart than to cap off this season with a win. And that is quite possible here. Stewart has three career wins at Homestead and has led the second most laps among active drivers at Homestead with 450.

A driver who showed his maturity after the Phoenix race was rookie Kyle Larson. He was the victim of an aggressive and desperate, and successful, move by Newman on the final lap when the two hit sides, sending Larson into the wall. But Larson understood what was at stake there and didn’t really blame Newman at all for doing what he needed to make the Championship Four. Now, Newman will just have to remember that, say in the next year or two, when Larson may well be running for a championship late in the season and also won’t be afraid to make a desperate move. For the record, Larson did run this race last year at Homestead and finished 15th, so not a bad day for him.

The other obvious pick here, among the C list drivers on Yahoo!, is Austin Dillon. This will be his first Sprint Cup race at Homestead, but he has shown some improvement late in the seasons, so a top 20 is quite possible for him.

A driver who did finish 20th last year at Homestead in the final race of her rookie year was Danica Patrick. So, if you think she can do even a couple of places better, she might be worth a pick this week.

And a the last option here could be Trevor Bayne, who will be in the No. 21 this week, his final race before moving over to the No. 6 car in Sprint Cup full-time next year. Bayne’s two races at Homestead have resulted in 23rd and 40th place finishes, so pick at your own risk there.

The overall leader in the Frontstretch League on Yahoo! is NoBarNASCAR with a comfortable 102-point advantage over LeftTurnOnly with a 9,384 to 9,282 margin. Next are L&M at 9,175, Mojothemonkey at 9,149 and Djarum Racing at 9,137. The biggest mover last week was Savage Bros Racing move up five spots.

The top score of the week was C Elliott 2014 Champ!!!! with 369 points from the combination of race winner Kevin Harvick, Brad Keselowski in fourth, Joey Logano in sixth and Kyle Larson in 13th.