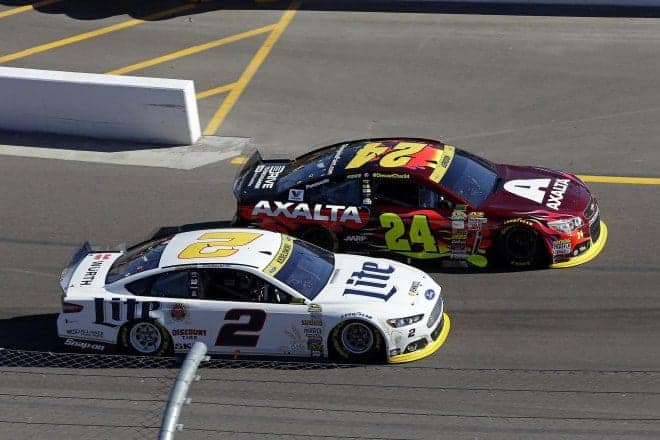 The field of four is set for this year’s finale at Homestead-Miami Speedway. NASCAR fans will see a first-time champion from among the likes of Joey Logano, Kevin Harvick, Ryan Newman or Denny Hamlin. The contenders weren’t locked in until the final lap at Phoenix, and when the dust settled, it was this group that stood on top, leaving Jeff Gordon, Brad Keselowski, Carl Edwards and Matt Kenseth on the outside looking in at the title.

The group left out in the cold is an impressive one, with a total of six titles between them, but they’ll be afterthoughts come Sunday, lost amid a sea of also-rans. But their 2014 seasons deserve a second look before being written off.

Gordon had what was, by any measure, his best season in recent years. He racked up more points from start to finish than any other driver — a measure that once would have marked him as a champion, maybe even a seven-time champion (Gordon earned the most points in 2004 and 2007 as well, but Chase resets erased any advantage he might have had). Title or no, though, Gordon has four wins this season and returns to Homestead as a former winner there, putting a fifth win easily within his grasp. His 14 top 5s and 22 top 10s stand among the best.

But perhaps Gordon’s greatest chapter has yet to be written. His four-win season has reignited an old discussion, one that swirled around Gordon in the prime of his career, when his season win totals were often in double digits. His career total sits at 92, just 13 behind David Pearson’s 105, a total that’s second only to Richard Petty’s 200 and one thought to be unreachable in the modern era. It’s still a stretch — Gordon is 43 and needs more than a dozen wins. But it’s a real possibility for Gordon, who is currently third on the all-time wins list, eight ahead of Hall of Famers Darrell Waltrip and Bobby Allison. The next active driver on the list is Jimmie Johnson with 70, and at just four years younger than Gordon, the 100-win mark may be unrealistic.

But Gordon, who could have become one of the sport’s immortals with a fifth title, has another chance to make sure he’s always in the conversation.

Keselowski’s year might be remembered years from now for his post-race altercations, which would be a shame. He leads all drivers with six wins this year, and his driving style, though often criticized for being ultra-aggressive, is one of the most exciting the sport has to offer. Keselowski has 16 top-5 finishes in 2014, tied with Logano for most on the Cup circuit. He’s won more money than any other driver this season, and led more than 1,500 laps through 35 races.

Keselowski is a polarizing figure in the sport, one that many fans love to hate. He’s brash, arrogant, and talented. He’s OK with being the villain if that’s how fans want to label him; it doesn’t matter to the Michigan native as long as he’s in the conversation somewhere. In some ways, he’s a bit like a young Jeff Gordon, in others more like Dale Earnhardt.

But Keselowski is really his own man, and he brings the sport something it desperately needed: a driver who makes people care. They might tune in in hopes that he wrecks, but they watch him. He’s the polar opposite of the likes of Johnson, the smooth, corporate, unruffled competition for whom Keselowski is the perfect foil.

Keselowski may well be remembered for his antics this year, but, well, maybe it’s not such a shame after all. His numbers are great, but his impact on the season was often memorable, and that is, in some ways, what the sport needs in terms of personalities.

One of seven drivers with multiple wins in 2014, Edwards had an up-and-down 2014. He had just seven top 5s but is eighth in season points earned. He’s led just 135 laps but has completed over 99 percent of total laps, something that’s surprisingly difficult to achieve.

Edwards has been tantalizingly close to a title before; he lost the 2012 championship on a tiebreaker to Tony Stewart. His 2014 season was not only the best of three drivers for Roush Fenway Racing, but Edwards did it as a lame duck after he announced plans to join Joe Gibbs Racing for 2015. At 34, if recent seasons mean anything, Edwards will be good for two or three wins a year and that makes him a perpetual contender for a title under the current format.

Edwards has been a point away from a title before. 2014 really wasn’t a championship caliber season for him, but Edwards will be in the conversation again next year. He’s the guy you can’t ever count out.

Kenseth did everything but win in 2014 (and he’s still got a shot at changing that). His 13 top 5s and 21 top 10s nearly rival Gordon’s numbers. He led more than 500 laps all told, and averaged a 13.4 finish through 35 races, better than Denny Hamlin’s 14.5. That can be said about much of Kenseth’s season — he outpaced both teammates, Hamlin and Kyle Busch, in top 5s and top 10s.

Kenseth showed fire during the Chase when he tackled Keselowski from behind after the race in Charlotte, and he showed prowess on the track as well. His Joe Gibbs Racing team seems to be a little behind the competition in terms of equipment this year, but that didn’t keep Kenseth from inserting himself into the conversation at many races. He didn’t get a win, but he wasn’t far from it, either. He’s been JGR’s best driver in the two seasons that he’s been there. He’s 42, so he may not have time on his side for multiple titles, but he could easily win a second one before he’s done.

I will forget about Gordon’s season like I forgot about Carl Edward’s Championship loss to Tony Stewart. I still forget that Stewart had a crappy year, was given over 100 points at the start of the Chase that enabled him to steal the title. What I may remember about this year is NASCAR’s full departure from a decaying sport to it’s entry into the drama filled faux reality show realm. I only expect the drama to ramp up from here. If it doesn’t I would suggest no regular season, divide the 36 race schedule into 3 championships so there is constantly a Chase with constant drama. There are plenty of other avenues for me to get my fix for real motorsports and we really lost NASCAR years ago so I say “Let’s Get Ready To Rumble…”.

…sad that these obvious points had to be even written about. Brian France and company forget their names already.

Gordon isn’t forgotten, even if NASCAR’s chase format has once again denied him the championship he earned thru wins & consistency.

I’m not really a NASCAR fan these days. I am, however, a diehard unapologetic Gordon fan.

I hate the elimination thing as much as anyone else. We can’t really say that Gordon would have won the title in another format though. Each year the teams race to whatever the rules are. There are too many decisions made based on the point system, be it what tire pressure to run or what line to take to pass the next guy.

I don’t like Gordon or Hendrick Motorsports overall, but I sympathize with his fans who deserve to see him with at least a shot at the title. If Gordon swapped 2014 seasons with Hamlin, though, I doubt the Gordon fans would dislike the elimination concept quite so much.

There is no guarantee that anybody would automatically win, but what I am upset about is the 4 “best” of the season are not represented in this “playoff” scenario. One my favorite drivers is in it, and I can’t stand this format.

Under the traditional points system, Gordon would have won at least 2 other championships and would be leading the points going into Homestead this weekend.

I agree, there is no guarantee that anyone would automatically win, but as BillB posted a while back, if you continually reset the points to zero, well, of course you will have a “close” finish in the points. IMO, that doesn’t make it right or fair, although I realize that some fans are enjoying it. I’m just saying that I’m not. Gordon has had a darn good season this year and IMO should be racing for the trophy, not Hamlin or Newman.

It was 2011 when Edwards lost the title because of a tiebreaker.