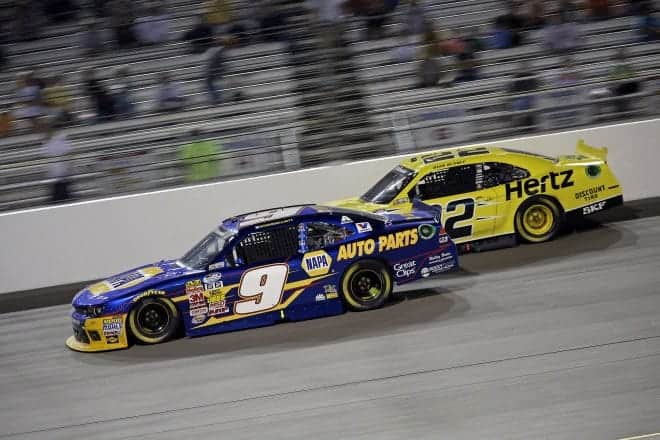 From 1983 until 2003, the Dawsonville Pool Room had quite the workout. And earlier this year, the Pool Room’s roof blasted off a siren that was made famous each time 1988 NASCAR Sprint Cup Series champion Bill Elliott won a race.

On Saturday afternoon, that siren will go off once again. It might not be heard by many folks since it’s location is in the midst of a small town, yet it will be in the memory of one young man that won’t even be present to witness the loud siren for approximately 30 seconds.

Elliott’s son, Chase Elliott, took a giant leap to the NASCAR Nationwide Series this season. From local short tracks to high-banked speedways across the nation,  this young man has been victorious in each division in which he has competed.

Now, he is the 2014 Nationwide Series champion.

However, he wasn’t even your usual Nationwide Series rookie, let alone champion. Elliott started out the year without a job; around this time in 2013, his future was uncertain. His sponsor at the time, Aaron’s, opted to focus predominantly on its Cup Series program with Michael Waltrip Racing.

But Hendrick Motorsports team owner Rick Hendrick was determined to find the young man a sponsor to race him in one of NASCAR’s top-tier divisions, and that he did.

NAPA Auto Parts joined forces with JR Motorsports and the 18-year-old prior to the 2014 campaign, and the rest has been history – literally. But first, he had to finish school, graduating high school in May.

“I hope that it opens the doors that first off – it will allow me to spend more time at the shop, kind of get to know the guys better and hopefully grow our relationship and communication side better,” Elliott told me a week after his victory at Darlington, his second win in the series. “I hope to improve that side, and hopefully it will allow us to go do some more testing, and just kind of open up more doors to focus more on racing. I definitely think that is what our competition is doing, and hopefully we can try to keep up with those guys.”

It’s hard to improve while leading the points – which was where he sat early in the season – but Elliott was able to do it. With 13 consecutive top 10s entering Homestead-Miami Speedway, he was able to lock up the championship over teammate Regan Smith, who has been a mentor for the rookie. Elliott’s consistency has proved to be a difference maker, and that is what led him to get the most out of his equipment throughout the season.

Over the course of 2014, Elliott has graduated high school, locked up a championship and won Rookie of the Year honors. Can life get any better?

Well, he still feels like he can improve. Back in April, he believed that leading the points wasn’t that big of a deal, and compared it to “having the best batting average on opening day.”

He was right; a few weeks later, he fell back to third in points. However, after winning at Chicagoland Speedway, the Georgia native was back on top and never looked back, with the help of Greg Ives as crew chief, who will move to Dale Earnhardt, Jr.’s Cup team in 2015.

For the 2015 season, Elliott will make the next step: the Cup Series.

Not full time, of course. He’ll be entering a limited amount of races in the series, prepping him for a rookie run in the future. Elliott has already tested a Cup car on multiple occasions, showing plenty of speed each time he strapped in the most powerful cars that NASCAR has to offer.

There’s parallels to Kyle Larson, who has been a stand out this year in the Cup Series, but Elliott has had more success prior to stepping into NASCAR’s top-tier division compared to the 2014 rookie sensation.

New crew chief Ernie Cope and Elliott will settle into place during the off-season. The two are primed for success with the chemistry that has entered the doors of JR Motorsports this year. If they keep up this pace, you are going to see Elliott holding the championship crown once again before he makes a likely entrance to the Cup Series in 2016 on a full-time basis.

And with another season, the Dawsonville Pool Room will have plenty of buzz thanks to their newest hometown hero.

This story is incredible! I never believed it could happen until it did. I denied it, even hated on it, thought nobody was really that good as an 18 year old rookie and it was all due to dumbed down racing. But Tuesday, someone on another site compared Joey Logano to Chase and that straightened up this Joey fan, so now I kinda like Chase and believe he deserved this championship. I don’t feel the need to boycott the Nationwide/Xfinity series, like I once did.