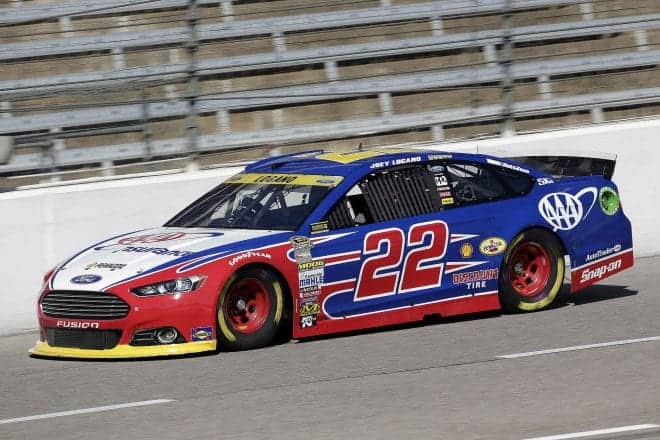 For many years, fans have listened to the driver/team radio communications using handheld scanner devices, sometimes programmed and brought from home. But today, FanVision takes that experience to a whole new level, allowing anyone with the device on any given race weekend to listen to team and NASCAR officials communications, radio broadcasts and PA announcers and to view live timing and scoring, along with multiple different video feeds from around the track.

Of course that means it didn’t take long for the teams to get in on the extra tools on race weekend too. Team Penske was one of the first to start using the devices.

“I think everybody knows Brad (Keselowski)’s an early adopter of technology typically and is certainly a proponent of the use of it,” Team Penske competition director Travis Geisler told me at Texas Motor Speedway. “He started with the handheld units, and we all started to adapt and saw how he was using it. Then we all started using it and implemented it into our strategy and how we were doing our race planning and practice planning.

“We started to look at what the next level was and where we could take that technology. It seemed like we were headed down the same path that the providers of it were, which was taking a pro approach and moving it to a TV-based larger format where we could interact with it on a bigger level than just the handheld unit.”

Fast forward to 2014 and FanVision introduced a set top version of the handheld device at the request of crew chiefs interested in more capabilities along pit road. According to an article in the Sports Business Journal, the FanVision Pro service began this season to the tune of $17,500 for the year.

“The idea was to bring more real estate to teams, so they could move data around and see what they want to see,” said Ted Van Zelst, chief revenue officer at FanVision. “We know our delivery system works.”

“I think it was kind of a natural progression where things were going. Everybody had handhelds, everybody was using them independently,” Geisler said. “You look at things and you look at what’s the next step, what’s the next thing we can improve? When it came around that the pro was coming out, we started to do some research on it and the capability of the real time video broadcast became a huge asset.

“The dependability of the data delivery for timing and scoring was a huge plus for us. That’s an area I think all the teams struggle with in the traditional data delivery format. There are times when you have outages, and your whole thing is set around that data, and when you don’t have it’s a big hurt.”

The organization as a whole has excelled this season, with drivers Brad Keselowski and Joey Logano combining for 11 wins, 32 top-5 finishes and 41 top 10s in 35 races. And it’s certainly plausible to believe that the extra information from the FanVision Pro has been at least a partial factor in that success.

“It’s really just a lot of faster response times and faster decision making,”  Geisler said when pressed about the team’s benefits from using the TV-based devices. ” Whenever you have more information, you can make better decisions typically. I think that any good procrastinator knows they’re only procrastinating because they want more information to make their decision on. We try to push everything to the last second deciding on whether we’re doing two tires, four tires. When you have a live feed of pit road, you get a chance to really see what people are doing.

“We all try to communicate during pit stops on the radio what other teams are doing, but being able to see the picture, you pretty much know. You can take in five, eight, nine cars worth of data visually faster than you can get that across in a radio broadcast. That’s been a good advantage for us. We feel like having good, dependable delivery of our data and being able to make our decisions off of that has been a good strength for us.”

While Geisler said the team doesn’t typically use the audio communications function of the FanVision pro, citing “so many audio channels coming into everyone’s radios between the driver, the spotter and the crew radios,” he definitely recommends the use of the service to anyone who hasn’t tried it before.

“I think the most important thing to understanding the races and the race strategies as they’re playing out and understanding the situation that your team is in is having the most up to date information,” he said. “And when you have that information in a large-scale TV type format or in the handheld version, you’re as up to date with what’s going on as any other potential supply out there. I think it’s a major advantage over the normal broadcast because you’re not waiting on a delay or a commercial when something is going on. If it’s a long caution, television will go to commercial and that may be the moment when you’re making your decision.

“The other part is with the ability to flip through channels, you can really hone in your focus on what you want to watch. You can choose your in car camera, you can choose your competitor’s in car camera that’s following you and see your car. That’s something that, on a regular broadcast or just watching from the stands, it’s a struggle to hone in on that since they’re trying to cover all 43 cars. My need or someone’s need as a focused fan is to see exactly what their team is doing and you can do that.”

I have used the handheld version of the device at the track several times, and I don’t know that I could ever cover another race without one now. The ability to see instant replays of action on the track when I’m somewhere in the infield away from television screens has been beneficial multiple times. Add in that I can listen to team communications when something happens and learn of a crew chief’s strategy to make repairs or move forward in the field, and it’s really something that I would miss if I didn’t have it.

The bottom line is that FanVision continues to improve and will be a must-have resource for teams and fans alike for many years to come.