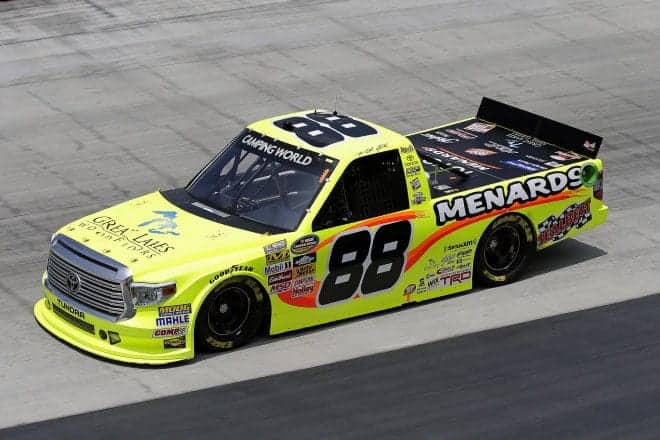 When the Camping World Truck Series rolls into Homestead-Miami Speedway on Friday night, most of the focus will likely be on the championship battle between Matt Crafton and Ryan Blaney. A couple weeks ago, I detailed the championship contenders and their best chances to take home the big trophy, but now we’re down to a two-man battle with Crafton holding a 25-point advantage over Blaney. That leaves Crafton in the catbird seat, needing to only finish 21st to become the first driver to score back-to-back championships in the Truck Series’ 20-year history. Essentially it’s Crafton’s championship to lose, but it’s far from the only story going on this weekend.

Aside from the driver and owner championships that will be handed out this weekend, there’s still a Rookie of the Year battle to settle, and it’s the closest battle of them all headed into this weekend. Turner Scott Motorsports driver Ben Kennedy, who has run the full season this year, holds a slim three-point advantage over Tyler Reddick, who has run a part-time schedule with Brad Keselowski Racing. Kennedy has held the lead in the rookie standings since he scored a career-best third-place finish. Though he’s only got seven top-1o finishes in to his credit this season, many of those strong races Kennedy has run didn’t end up in the finishes that the overall race performance deserved. His competition in Reddick, though, has shown some great strength over the last several races. After scoring just two top 10s in his first eight starts, Reddick has posted top-10 finishes in six of his last seven races and put himself in position to challenge Kennedy for Rookie of the Year honors. It’s hard to guess which driver will come up on top Friday night since neither one has much of a history at Homestead (Kennedy blew an engine last season and Reddick has not raced a truck there). But regardless of who takes home the trophy for top rookie, both drivers have bright futures in the sport.

When the checkered flag drops over the final race of the season, we’ll all look back at the season that was. From the dominance of Kyle Busch Motorsports to Matt Crafton’s consistency and even the strength of the youngest drivers that have made limited starts in the series, it has been yet another one to remember. And when all is said and done, three trophies will serve as the most tangible memory of yet another season gone by.