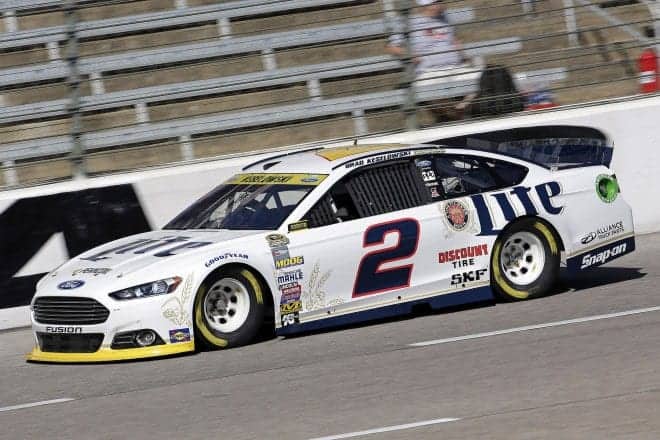 On Friday afternoon, the 43 Sprint Cup teams assembled at Homestead-Miami Speedway ventured out onto the 1.5 mile oval for a 90 minute practice session to prepare for Friday night’s qualifying session.  While the Chasers were the primary focus, a non-Chaser was fastest of all.

Brad Keselowski, teammate to championship contender Joey Logano, was fastest in the session with a lap of 30.167 seconds (179.004 mph), which he turned in on his final lap on the track.  Kevin Harvick, fastest of the championship contenders, was second quickest, nine thousandths of a second slower.  Harvick’s Stewart-Haas Racing teammate Danica Patrick was third quickest, followed by Matt Kenseth and Kyle Larson.

Kurt Busch made it three Stewart-Haas Racing Chevrolets in the top-10 by turning in the sixth fastest time, followed by Hendrick Motorsports teammates Jeff Gordon and Jimmie Johnson.  Chaser Ryan Newman was ninth, while Kyle Busch rounded out the top-10.

While Harvick was the only Chaser to practice in the top-5, Ryan Newman in ninth and Denny Hamlin in 11th were still quite fast.  Logano, unlike his teammate, was a bit off the pace in 22nd.

During the session, there were a couple of issues.  Austin Dillon lost a right rear tire during the session, but kept the car out of the wall.  Martin Truex, Jr. had smoke come out of his Furniture Row Chevrolet, accompanied by a fluid leak.  No word as of yet whether Truex requires an engine change.

Qualifying is scheduled for 6:15 p.m.  The session will air live on ESPN 2 and on SiriusXM NASCAR Radio.