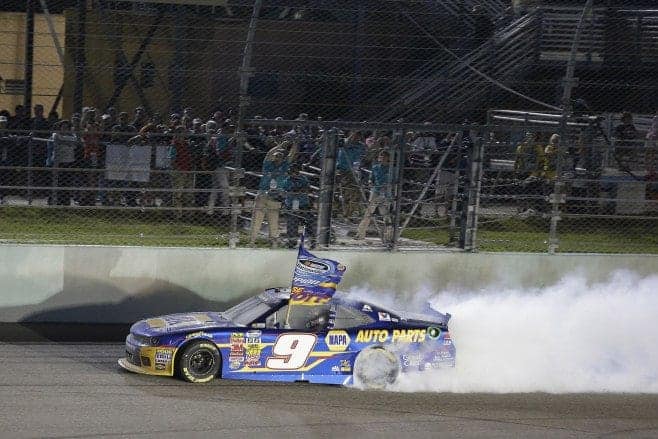 The last time that Matt Kenseth won a race was over a year ago. That changed on Saturday at Homestead-Miami Speedway. Driving the No. 20 Toyota for the 19th time in 2014, the 2003 Sprint Cup Series champion took home his first victory in any NASCAR division for the first time since Kansas October 2013.

Kenseth led three times during the Ford EcoBoost 300 to record his 29th career Nationwide Series win in his 283rd start. Although he didn’t have the best car, he was able to get a strong run on the final green-white-checkered restart and edge his Joe Gibbs Racing teammate Kyle Busch. Leading 52 laps in route to his victory, Kenseth had to hold off Kyle Larson, who started beside him on the final two restarts. Larson led a race-high 111 laps, yet failed to score his third victory of the year for the No. 42 team.

Busch, who led five laps during the race, was able to get around Larson after trailing him for the majority of the race. Ryan Blaney and Chris Buescher came on strong late in the going to round out the top-five. There was, however, another story to do the day.

Chase Elliott was officially crowned the 2014 NASCAR Nationwide Series champion. Following in his father Bill’s footsteps, Elliott won three races in 2014 and had 16 top-fives with 26 top-10s, as he became the youngest champion in the division’s history. He is also the first rookie to win the Nationwide Series title.

The race lasted approximately two hours and 45 minutes, which, in an odd note,  was the same exact length of last year’s race at the track.  There were 10 leaders with 16 swaps for first which surpassed the track average of 13 entering Saturday’s event.

Kyle Larson had a great run in the No. 42 Chevrolet for Turner Scott Motorsports. Although the team is likely not returning next year, he was able to give them their 14th top-five finish of the of 2014. Larson won two races and had an average finish of roughly 8.5, which is better than last year when he finished with just 17 top-10s.

Chase Elliott is probably glad he locked up the championship before Homestead. He struggled throughout the weekend, and nearly missed the second round of qualifying on Saturday. However, he rebounded to run inside of the top-five late in the race. But Elliott took fuel-only during a late-race pit stop, which forced him to drop like a stone after the restart. Elliott was going to settle for a top-15 result, yet he got into the wall with less than 10 laps to go. He ended the day in 17th.

Trevor Bayne was inside of the top six for the majority of the race. In his final event as a full-time Nationwide Series driver before moving to the Cup series with Roush Fenway Racing, Bayne wrecked with 39 laps to go. Following the accident, Bayne got into the wall once again. He finished 11th in his final race for the team.

Matt DiBenedetto struggled all weekend in the No. 40 car. After going to the garage early in the race, he came back on track. However, DiBenedetto stalled on the apron, which led him to finish 38th. His plans aren’t definite for next year as The Motorsports Group is selling their Nationwide Series operation, and his plans are unknown.

Corey LaJoie was running inside of the top 20 when his No. 98 Ford slammed into the wall. Homestead was his fifth Nationwide Series start of the season, and he was set to have a solid run. However, like DiBenedetto, nothing is set in stone for 2015. But Richard Petty Motorsports is working on running the 22-year-old in a few more Nationwide Series races next season.

Jeremy Clements had another solid run in the No. 51 Chevrolet. He took his car home in the 13th position for their second straight top-15 finish. Just behind him was Ross Chastain, who received the lucky dog twice on Saturday. Chastain rebounded to earn a top-15 result after struggling early in the race. TJ Bell earned his first top-15 for the first time in his career. Bell’s previous best career finish was 15th at Dover in 2005, and it was his first finish on the lead lap in his 50th career start.

2013 NASCAR Whelen Modified Tour champion and NASCAR Next member Ryan Preece finished 28th at Homestead after running inside of the top-25 late in the going due to a sour engine. Racing for Tommy Baldwin Racing, he went two laps down early in the race, yet he was able to get back on the lead lap after taking the wave around during the fourth caution of the day and getting the free pass two cautions later. Preece ran this race instead of Richmond in September because he is attempting to get approved to run the superspeedway events next season.

Busch, Keselowski, Bayne, Scott, Cassill, Yeley, Koch and Paul Menard each running the Sprint Cup Series season finale at Homestead on Sunday afternoon. None of the four drivers contending for the Cup Series championship were in Sunday’s race. Menard filled in for Scott Lagasse, Jr. in the No. 33 Chevrolet on Saturday morning after he became ill at the race track. John Wes Townley and Ross Chastain were the lone drivers in the field to also run the Camping World Truck Series race on Friday evening.

Two of the 40 cars opted to start-and-park on Saturday evening. The two drivers that decided to end their race early were Jeff Green and Joey Gase.

After a great run as the title sponsor of NASCAR’s second-tier division, Nationwide is leaving their side in 2015. They’ll be focusing their sponsorship on Dale Earnhardt, Jr.’s Cup car. It has been an amazing run for the insurance company, since Nationwide replaced Busch in 2008, there have been six different champions, with Ricky Stenhouse, Jr. repeating.

But now, we look forward to 2015 with XFINITY coming on board. Elliott is looking to avoid the sophomore slump in the No. 9 car for JR Motorsports. The team is going to have stronger  competition in 2015 as Richard Childress Racing and Roush Fenway Racing each appear to be coming on. With Chris Buescher and Ty Dillon ending the year on a high note, they are expected to contend for the title next year.

It’s going to take a lot to edge out Elliott in 2015, though. Ernie Cope and he are likely to pick off where the No. 9 team left off. Regan Smith is expected to get a new crew chief, so he could be stronger if JR Motorsports gives him someone that he gels with more than Ryan Pemberton.

Heading into 2015, there are still a few unknowns. Ryan Blaney is expected to race a chunk of the schedule for Team Penske, but there is no word if he will race full-time for them. However, it is expected that he will be part-time. The same can be said about Darrell Wallace, Jr. at Joe Gibbs Racing. Both organizations have struggled to put packages together for their young stars though the both have shown they are competitive at this level of competition.

Ho-hum! Yet another Nationwide race dominated by Cup drivers in far superior equipment, and won by a Cup driver. Personally, I was cheering for Blaney, Chris Buescher, and Trevor Bayne! I find it interesting that a team like Joe Gibbs Racing can find all the sponsorship money in the world to Kyle Busch and Matt Kenseth (and most likely Carl Edwards in 2015) in his Nationwide cars, but he can’t find enough money to run Darrell Wallace Junior full time? What is wrong with this picture? I hope Xfinity doesn’t have too high hopes for this series as they begin their sponsorship. I know one Nationwide Race, oops, I meant Xfinity Race, that will have two additional empty seats next year, as I only renewed my two Cup race tickets. Same goes for the truck race held at the same track.

You may remember this one. Several years ago, Denny Hamlin was to run a Nationwide race and couldn’t get to the track in time. So, Aric Almirola started the race and was actually leading when the caution flag flew. They called him into the pits and changed drivers! Denny was now driving the car and Aric was incensed. But, the sponsors had demanded that Denny drive the car for that race. They had many of their employees in the stands and that’s what they were paying the bill.

Brad Keselowski has been criticized for driving the Discount Tire car in Nationwide. The idea being leave it for Nationwide drivers. He explained that if wasn’t driving the car part of the time that the ride wouldn’t exist.

Kelley Earnhardt has also been talking about this when discussions about limiting Cup drivers participation have arisen. She said it would make it very tough for their teams to get enough sponsorship.

Another idea would be to start worrying more about what your dwindling fan base wants than what a few sponsers want. The time has come to and just stop playing games and get the Cup drivers OUT. Essentially a practice session for Sunday’s race where one of the also rans is declared pretend Champion the series has become a farce. I won’t watch again until the Cup drivers are gone and maybe not even then. Judging from the TV ratings and free fall track attendance I am far from alone.

I’m disgusted with the Cup presence myself.

I’m a Trevor fan, so with you on him.

The Trevor thing was aimed at Ken.