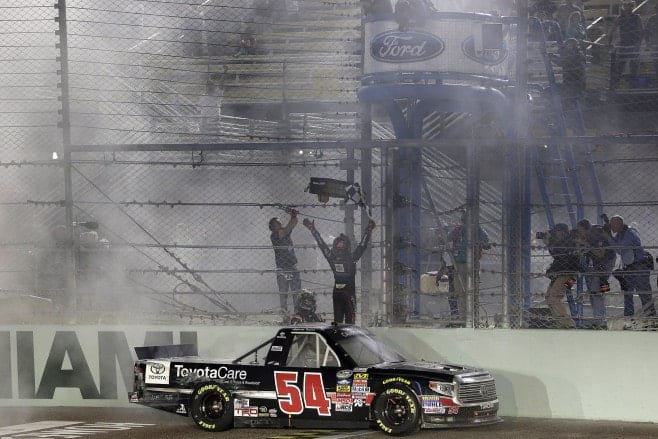 Author’s Note: To all of my readers that have stuck by throughout this season that the Truck Series has struggled through: thank you! Your criticisms and praise have challenged me to think outside the box in a year that can only be considered a tough one for the series that featured several short fields, and you are the reason I get to do what I love each and every week. I look forward to a restful offseason and hitting the ground running once again in 2015. I’d like to wish all of you a safe holiday season with your family and friends.

In a Nutshell: Darrell Wallace, Jr. took the checkered flag 0.293 seconds ahead of Kyle Larson to win Friday night’s Ford EcoBoost 200 at Homestead-Miami Speedway. The driver of the No. 54 Toyota held off a hard-charging Larson in the final laps to score his fourth win of the season and his first on a mile-and-a-half track. Timothy Peters, Kyle Busch and Ryan Blaney rounded out the top 5.

Who Should Have Won: Kyle Larson was in a different zip code than the rest of the field on Friday night. But after leading 96 of the first 100 laps, his No. 42 truck handled differently when he wasn’t out front. Though he made a hard charge after race winner Darrell Wallace, Jr., he was unable to complete a winning pass and ended up second on a night when he could have easily won had he been able to make a pass for the lead stick.

Truck Series History Is Made

Matt Crafton made Camping World Truck Series history on Friday night when he became the first driver to score back-to-back championships in the series’ 20 year history. With two wins, 13 top 5s and 16 top-10 finishes, the driver of the No. 88 Toyota headed into Homestead with a 25-point advantage over Ryan Blaney. Crafton needed to finish 21st or better no matter what Blaney was able to do, and he played it safe, running conservatively for much of the night before finishing a solid ninth, more than enough to win his second consecutive championship.

“Awesome. To say I made history is definitely very, very cool, but it’s all about the guys that are behind me. Without them, I’m just an average race car driver at best,” Crafton said after the race. “It’s all about the truck that these guys put underneath me each and every week. This Menards Toyota Tundra has been really – it’s been unbelievable to drive every week this year.”

So what’s next for Crafton, whose goal when he entered the Truck Series back in 2000 was to win the championship?

If you were to look at Ryan Blaney’s fifth-place finish on Friday at Homestead, you wouldn’t believe he struggled all night long with his truck. Needing to win the race and lead the most laps (and hope for bad luck for Matt Crafton) to put himself in the best position to sneak in and snatch the championship away, Blaney immediately fought a loose condition, something the team worked on for much of the night.

And if that wasn’t enough, he suffered a broken shifter under the fourth caution. Though there was enough of the shifter left attached to the transmission for Blaney to use, the lack of maneuverability caused him to lose several positions. Under the fifth caution, the team handed the driver of the No. 29 Ford a pair of vice grips that he was able to attach and use for the remainder of the race. Though he ran as high as second briefly, he ended up settling in for a fifth-place finish following a several lap battle with Kyle Busch.

“We struggled all night,” Blaney said. “It was one of the worst trucks I’ve ever had. I can’t believe we finished fifth.”

* Mason Mitchell made his Truck Series debut on Friday night in hopes of securing financial backing for a full-time ride next season. After starting 18th, he finished a respectable 16th on the lead lap and gained valuable experience in the process.

“It’s so hard to pass here,” Mitchell told Popular Speed’s Matt Weaver after the race. “So the one thing I had to learn was that keeping momentum up is even more important here than it was back in ARCA. I think we had a 10th-to-12th place truck — speed wise — but didn’t have the track position or the experience needed to pass better.

“I feel like I learned a lot and left here able to remove my Miami rookie stripe. I really enjoyed the weekend and hope that it leads us to where we can do even more next season.”

* Two drivers in Friday night’s Truck Series field will be running triple duty this weekend. Kyle Larson, who finished second, and Kyle Busch, who finished fourth, are scheduled to run in the Nationwide and Cup series races also. Larson and Busch will start 27th and seventh in Sunday’s Cup race, respectively. Nationwide qualifying will be held Saturday afternoon.

* Ty Dillon stepped in as a last minute sub for Brennan Newberry, who was forced to sit out the weekend due to an illness that sent him to the hospital. Dillon started and finished seventh on Friday night after bouncing off the wall late in the race.

Thank you @TeamNTS for the oppertunity tonight I screwed us out of a top 5 but p 7 wasn't a bad day fun to be back in a truck after a year.

* Darrell Wallace, Jr.’s victory on Friday night marked the 14th for Kyle Busch Motorsports (four from Wallace, three from Erik Jones and seven from owner Kyle Busch) and the 18th for Toyota, tying the manufacturer with Chevrolet for the most wins in a single season. Three of the remaining four wins came from ThorSport Racing teammates Johnny Sauter and Matt Crafton, who won one and two races, respectively. Timothy Peters had the other Toyota win for the year at Talladega Superspeedway.

* Kyle Busch Motorsports engineer Eddie Troconis went into Friday night’s season finale with a heavy heart, having lost his mom early that morning. The No. 54 team sprang into action to honor his mother, Alejandra Troconis, surprising Eddie with her name above the door on Darrell Wallace, Jr.’s truck. Though she wasn’t physically there, his mother was able to celebrate in Victory Lane.

My mom on VL tonight thanks @BubbaWallace for driving his heart out for my family! #54strong #truefriends pic.twitter.com/Xt28AJNLcz

No. of Rookies to Finish in the Top 10: 2; Kyle Larson, finished second; Tyler Reddick, finished sixth

Ben Kennedy and Tyler Reddick headed into Homestead locked in a tight battle for Rookie of the Year, separated by a mere three points. Early on, it looked like Reddick might have enough to take that title despite having only run a part time schedule, but a late-race slide as a result of a three-wide battle with Kyle Larson and teammate Ryan Blaney, Reddick dropped through the running order to his eventual finishing position of sixth, allowing Kennedy to tie his fellow rookie. But because Kennedy sat higher in the driver standings, he is the 2014 Rookie of the Year.

“This is awesome. I think it’s a testament to the team and how hard the guys at Turner Motorsports worked,” Kennedy said. “This Rookie of the Year deal was on my bucket list and I’m humbled by it. We weren’t really all that great tonight but it pays off for the whole season.”

Points Update: Matt Crafton walked away from Homestead-Miami Speedway as the champion by 21 points over Ryan Blaney. Darrell Wallace, Jr. ended up third in the standings. Crafton’s ThorSport teammate Johnny Sauter came home fourth, and Timothy Peters rounded out the top 5. German Quiroga moved up one spot to sixth and was followed by Joey Coulter, who dropped a position to seventh. Jeb Burton and rookie Ben Kennedy tied in points, but Burton took the tiebreaker based on having two top 5s to Kennedy’s one. Bryan Silas moved up two spots and rounds out the top 10.

“Eddie’s (Troconis, team engineer) mom (Alejandra Troconis) – she passed away this morning – and I told them to take my name off the truck and put her name on there. I said we had a guardian angel and she took us to victory lane. I told everybody that we wanted it more than anybody else and let’s show it. I saw that trophy coming down the stage and said that was a cool one – it’s a unique one. I have all the unique ones so why not add that one to the shelf? I can’t thank these guys enough for their hard work over two years. It’s been fun at KBM (Kyle Busch Motorsports). I’m not sure what the future brings for me, but this is one hell of a way to go out. Huge thanks to Toyota, Toyota Care – my parents. This is cool – definitely a lot more emotional than Martinsville. Couldn’t do it without these guys right here, these guys never gave up over two years and came home with five wins and a hell of a season.” Darrell Wallace, Jr.

“We definitely had the best truck. We had a bad pit stop that last stop and I had a couple bad restarts. It’s hard to find clean air in the trucks as they punch such a hole. We were so even. Bubba did a good job once again. Two tracks he beat me at where he ran the rim. I hate it that we finished second but it was a good run for us.” Kyle Larson

“It was a lot of fun. What a way to finish and end the season. It feels good to come to Homestead and do this. Wish we had about 20 more laps but we’ll build on it and go to Daytona. I just wish that the second half of the season was the first half for us as that could have been us celebrating the championship.” Timothy Peters, finished third

Up Next: Camping World Truck Series drivers will hang around the Miami area through Monday when the combined Truck and Nationwide series banquet will be held at the Trump National Doral Miami hotel. The banquet will air on a tape delay Sunday, Nov. 23 at 7:00 p.m. ET on FOX Sports 1.

You are a very good writer tasked with an almost impossible subject. NASCAR has done everything humanly incompetent to make the series unwatchable. Honestly, it isn’t even racing anymore, I don’t know how you do it.