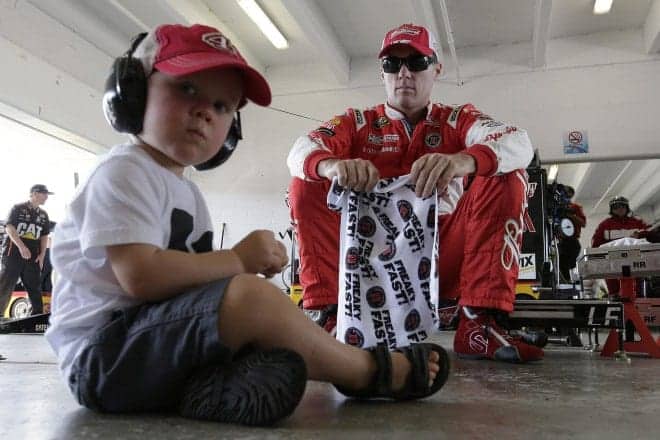 This week, 13 years ago, one 25-year-old was making history. A week following Dale Earnhardt’s death, this man took the helm of the fabled No. 3 car after completing his first full season in the Nationwide Series. But with limited success in the renumbered No. 29 car in the years following Earnhardt’s passing, this gentleman realized it was time to move on, and he did.

When the checkered flag flew on Sunday evening, that man was finally crowned as a champion. Following his predecessor’s footsteps, this man had won a chunk of races early in his career, though until this year, he had never finished first in the race that counted the most – the championship.

Kevin Harvick, a winner of 28 NASCAR Sprint Cup Series events, took home the championship trophy for the first time in his career. For 14 full-time seasons, full of ups and downs, he finally came out on top. But 2014 was a rollercoaster for Harvick. He experienced multiple mechanical failures early in the year, and over the course of the season, it appeared as if it he was in the wrong place at the wrong time nearly every other week.

“Been trying for 13 years,” Harvick explained following his win at Homestead on Sunday evening. “I just have to thank Tony Stewart and Jimmie Johnson for helping me through this week. Jimmie was in my trailer as much many of my teammates, and calling me and on the phone – doing all the things that it takes to tell me what I needed to do today. I think this Chase is about the best thing that has happened to this sport over the last decade.”

Prior to this year, Harvick made one of the toughest decisions of his life. From 2000 through 2013, he had been a part of Richard Childress Racing. The two were successful, and he won a pair of Nationwide Series titles, but that elusive Cup Series title never came. Being named Earnhardt’s replacement brought with it high expectations, but he failed to finish higher than third in points for the legendary race team.

Harvick was looking for something new. The team wanted a replacement for Ryan Newman, who under-performed with them for several years. Budweiser opted to join him in his new adventure, and it was the perfect scenario, even though there were unknowns about what they were getting into.

Rodney Childers was one determined crew chief. For roughly five years, he had been on top of the pit box for a driver in the Michael Waltrip Racing stable. However, his most successful year with the Toyota crew (2012) brought seven top fives and 16 top 10s. In his final race with them, he made a daring call in an attempt to get Mark Martin one final win before the two went their separate ways. Martin ran out of fuel with a few laps left in the summer race at Michigan, but it left a lasting impression on what Childers is all about.

Stewart-Haas Racing saw how daring he was over the past few seasons, and signed him to be Harvick’s crew chief. At the time, this writer thought it was a bad move. Brian Vickers was going full-time racing in 2014 for MWR and the two appeared to have chemistry. Harvick had worked with veteran crew chief Gil Martin for seven years, and they were having plenty of success in 2013, but a change was needed.

“Once that decision was done, it was done,” Childers said when asked about taking a chance on leaving their old teams.  “I never thought for one second that it wasn’t going to work.  From the time that he and I looked at each other and said we’re going to do this, it was over.  The worst thing you can ever do is tell somebody they’re not going to go win a championship somewhere, because they’ll do it.”

When Childers left MWR, he made a smooth transition to SHR, where he was free to build a team from scratch. He did just that. From January until March, he spent every day at the shop until 9 p.m. from early in the morning. He was determined to make this work. But he had no choice. It was all or nothing for the pair.

As soon as they hit the track to test out multiple aerodynamic packages at Charlotte Motor Speedway, it was clear that Harvick and Childers were going to be strong. However, not many, including myself, believed they would be as astonishing as they were.

“You know, we had always raced against each other, and I knew him as one of the best drivers in the garage that wanted to win every week and was emotional at times and this and that,” said Childers on his driver.  “You know, Kevin calls it that we dated for a year, but we really did.  I mean, like after six months of talking like every other day and text messaging every day and all, like there wasn’t a bit of that going into the season.  I mean, going into that first test in December, there’s never been any of that.  It’s just been believing in each other and believing in our team.”

Over the course of the season, Childers and Harvick learned about each other. It’s something that Kenny Francis, Childers’ close friend, has done for nearly a decade with Kasey Kahne. As they learned who they are outside of the track, their success carried over to every race weekend. They were so tenacious that the pair led 2,238 laps, which is just the third time since 2000 that a team had led more than 2,000 circuits in a given season.

Throughout 2014, not only was the No. 4 car fast on race day, but time trials showcased their raw speed. Prior to this year, Harvick had just six poles. He surpassed that this year with eight, and he set six track records.

However, there might have been one thing that gave Harvick a mental edge over his competitors.

Just days following Earnhardt’s death, he got married to Delana Harvick (nee, Linville). Throughout Harvick’s career, she has been at the track nearly every weekend, often in a fire suit similar to her husband’s (at least until this year). Then came the biggest change of their lives. Delana gave birth to Keelan in 2012. Ever since, Harvick puts him in the car prior to every race, which has seemingly given him an added level of confidence.

That confidence helped Childers and he do the unthinkable in 2014. It was a season full of special moments. As soon as they won at Phoenix, it proved there was something special in the making.  To cap it all of with a Sprint Cup Series championship and making Harvick just the third driver to win championship in both the Nationwide Series and Cup Series has made it all worth while for a pair that had many uncertainties heading into this year.

Interesting statistics, Ray. I really wish NASCAR would show the final points standings the old way. Made it so much easier to see what kind of a season the various drivers had. Because he missed the Chase, the best Larson could finish in this year’s points was 17th.

Also, agreed on Larson. He really looks like he can drive with the big boys. Amazing with only 1 year of Nationwide under his belt. Fun times!