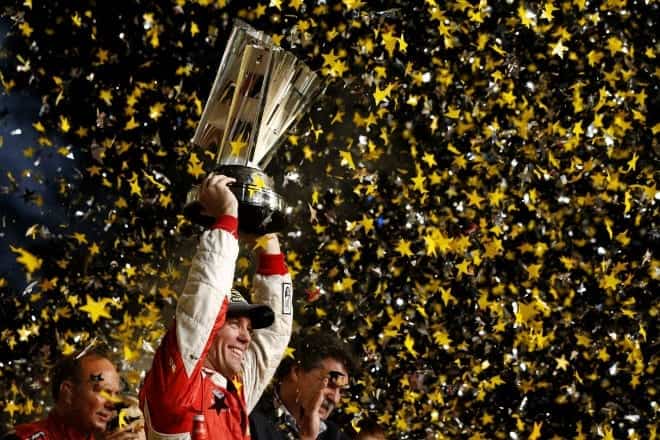 Joey Logano, after finishing fourth of the title contenders, remarked that consistency really didn’t matter.  According to last year’s points scenario, Logano would have been in a position to cruise toward his first NASCAR title.  That’s so passe.  Because if one is going to take that stance, then Jeff Gordon might be more than happy to argue about the concept of consistency and state that he should have earned his seventh, eighth or ninth Cup title at Homestead.  (Those numbers up for some kind of scrutiny.)

So Harvick earned his championship under the format that exists in its current state, and it’s hard to argue against it, seeing as how he won the last two races of the season. But there’s something about the Homestead race that just seemed a little askew.  Maybe it was the incessant cautions, that seemed to come about every 30 laps.  Or maybe the tires that Goodyear brought to the track that only half the field seemed to know how to use without blowing them out might have been curious.

It doesn’t matter though.  For, however flawed the new Chase system is, Harvick skated through and claimed the prize. While many fans have had issue about Homestead being the site for the final race, that really shouldn’t be a concern, because, really, the track provided some of the best racing of the season thanks to its progressive banking.  You want side-by-side, lay down some progressive banking, it seems to bring out the best.  Therefore, while Homestead might not have the cache of Daytona, Charlotte, Martinsville, or Darlington, it’s still a great spot to conclude the season. And that’s that.

Congratulations to the 2014 NASCAR Cup Champion Kevin Harvick.  All the various ways of crunching the statistics don’t matter at this point.  Huston Ladner

Sprint Cup Series Part II: Chad Knaus Working His Magic – Seems Chad Knaus never stops doing what Chad Knaus does.  FOX Sports reported that Knaus was summoned to the NASCAR hauler / principal’s office for trying to mess around and do stuff that would help his driver. Knaus, circumventing rules?  Say what?!

This one has all the makings of a non-story as what the crew chief was messing with was a wheel spacer.  Jimmie Johnson tweeted after the race that the wheel spacer was an attempt to make up for a loose wheel that had previously caused the car problems.  Um, ok.  Pretty sure there was no mention of him battling a loose wheel during the race, but then again, ESPN never mentioned that Knaus had been told to bring his person to the portable detention office.

The curious thing is that Knaus apparently ‘disobeyed’ a NASCAR order.  Yet at the same time, the sanctioning body seems to have let it go, leaving it as one of those things that hover in the realm of curious and unexplained.  These moments, however, are the very ones that leave fans wondering just what it is that the sinister mind of the Emperor of the Death Star HMS is up to and how he gets away with them.  Seems like a good time for the offseason.

Now about those side skirts.  Huston Ladner

NHRA: Crowning a Champion – Four divisions were decided and four champions crowned at the NHRA Auto Club Finals at Auto Club Raceway in Pomona this weekend. Erica Enders-Stevens made the big news and capped off the “Year of the Woman,” as it has sometimes been called, by making history as the first female to win the Pro Stock championship.

“It’s awesome to be a part of this female movement in NHRA,” Enders-Stevens said. “I think it goes to show what we’re capable of and what a great platform NHRA gives all of us girls to climb the ladder and to get to where we want to go. To join two of my heroes, Shirley Muldowney and Angelle Sampey, who are both my friends now, as NHRA world champions, is simply unreal. The words of advice I’ve received from those two women means so much to me.”

Tony Schumacher clinched his eighth Top Fuel title when he qualified for the event while Andrew Hines got the Pro Stock Motorcycle title with a first round win in eliminations. Matt Hagan clinched over John Force in Funny Car after the semifinals, and for Enders-Stevens it came down to the final round of eliminations where she faced off against her title competitor, Jason Line.

Line went into eliminations as the number one qualifier with Enders-Stevens, holding a slim 19 point lead in the championship, right behind him in third. The two traded the lead all day as Line would win a round and take the lead only to be answered by Enders-Stevens winning hers and taking it back. It eventually came down to the perfect scenario with the two facing off in the final round, winner take all for the championship.

Both drivers admitted the situation was high pressure all day and whether that’s what bit them or not, both jumped on the start, but Line did it first, with an -0.011 reaction time to Enders-Stevens’ -0.002. The foul gave it to Enders-Stevens, who recorded a pass of 6.480, 213.43 mph to score the win and take the championship.

Hagan and Force took it nearly down to the wire too. The two did end up facing off against each other in the final round, but Hagan held a lead of 23 (a round is worth 20 points), meaning once Hagan won his semifinal matchup, Force not only had to win his to stay alive, but had to set a new national record to earn a few extra points and then beat Hagan in the final. Force did win his semifinal over Alexis DeJoria, but failed to post a record time, giving Hagan the championship. Hagan also went on to win the final with a pass at 4.076 seconds, 310.77 mph, over Force.

Nationwide Series: Nationwide’s Swan Song – As the checkered flag fell over the Ford EcoBoost 300, the Nationwide Series ceased to exist. Earlier this season, Nationwide announced its departure as series title sponsor, and Comcast’s XFINITY brand stepped up to take its place. In a race that was just a formality for Chase Elliott, who clinched the title last weekend at Phoenix International Raceway, Matt Kenseth led three times for 52 laps, besting Kyle Busch and Kyle Larson, who led a race 111 circuits. Meanwhile, the champ struggled, bouncing off the wall and ultimately finishing 17th.

The good news for fans who have enjoyed Nationwide’s role in NASCAR is that the company is not leaving NASCAR for good. In fact, part of the move was to allow the insurance company a chance to take on a larger role in driver and team sponsorship, something it has done by aligning with Dale Earnhardt, Jr. In the end, Nationwide is still on your side… so don’t worry. Beth Lunkenheimer

Camping World Truck Series: Matt Crafton Makes History – Matt Crafton made history on Friday night following a solid ninth-place finish when he was crowned the 2014 champion. His championship marks the first time in the Truck Series’ 20-year history that a driver has won back-to-back titles. In a season that was marked by two wins, 13 top 5s and 17 top-10 finishes in 22 races, Crafton held the top spot for the last eight races and 12 overall.

“It’s awesome – to say that I’ve done it back-to-back and no one has done that – it’s such a good, good feeling. I just remember watching Ron Hornaday race my dad back in the Southwest Tour days.  He was an animal then and an unbelievable race car driver. To say I’m in the history books with Ron Hornaday – and all those great race car drivers – its great being in the NASCAR Camping World Truck Series. I still say it’s the best racing in NASCAR.”

As far as what’s next for Crafton, he’s made it very clear that he doesn’t intend to quit racing any time soon. And when I talked to him a couple years ago about his longevity within the series, he said he wouldn’t move up to Cup or anything similar unless it was with a strong team, rather than a backmarker. So all roads most likely point to another year with ThorSport, and there’s no reason to believe he and the No. 88 team won’t come out at Daytona swinging once again. Whether he can win a third straight championship remains to be seen, but as of now, the team has the momentum that makes me believe it’s absolutely possible. Beth Lunkenheimer

I hope NASCAR does something about the sideskirts next year. It’s one of those things were teams will keep pushing the limit to ridiculous levels until NASCAR steps in (e.g. crabwalking cars in 2008-9). It should be easy to enforce since they are using more video technology to monitor pit stops next year.