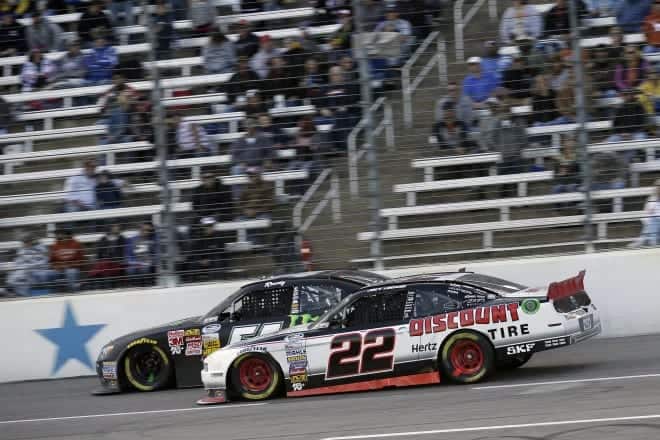 Discount Tire will be the primary sponsor of the No. 22 Team Penske Ford Mustang for a minimum of 24 races in the NASCAR Xfinity Series (formally Nationwide Series) while serving as an associate sponsor for both Brad Keselowski‘s No. 2 and Joey Logano‘s No. 22 Ford Fusions in the NASCAR Sprint Cup Series.

“We are happy to be extending our relationship with Team Penske into 2015 and beyond,” Michael Zuieback, President of Discount Tire, said. “They’ve been a loyal ambassador of the Discount Tire brand since we began our relationship with them in 2010. The entire team, from Roger Penske to Brad Keselowski, Joey Logano, Ryan Blaney and everyone that is a part of the No. 22 crew, exemplifies performance and professionalism. We’re looking forward to many more years of success together both on and off the track.”

Discount Tire has been a partner of Team Penske’s since 2010, and experienced success this year with Penske earning their second straight Nationwide Series Owner’s Championship with six different drivers behind the wheel throughout the season.

“The on-track success that we have shared with Discount Tire has been remarkable over the last few years,” Penske said. “Discount Tire has been an important part of our championship runs as a key sponsor of the No. 22 team in 2014 as well as our other title-winning seasons in 2010 and 2013. Away from the track, they have been great partners with the Team Penske organization and they have developed important relationships with several of our other partners. Discount Tire represents a perfect example of how companies can utilize the sport of NASCAR both on and off the track to achieve success.”