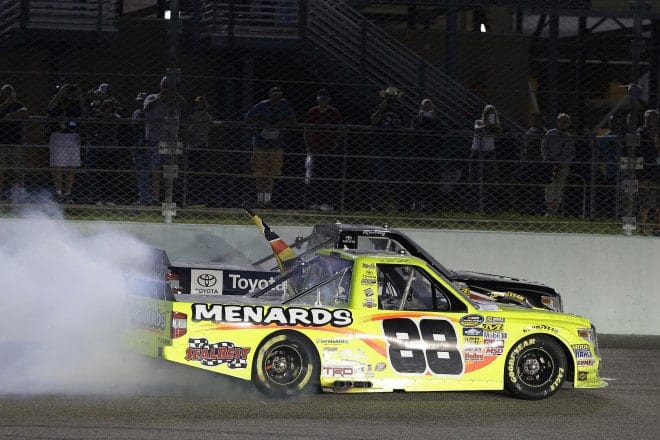 ONE: Stewart-Haas Racing’s crazy path to a second title

When Stewart-Haas Racing announced they would run four cars in 2014 with Kurt Busch, Kevin Harvick, Tony Stewart and Danica Patrick behind the wheel, media and fans alike thought co-owners Stewart and Gene Haas were crazy. Three of the four are among the most outspoken drivers in NASCAR’s garage, while Busch repeatedly crossed paths with Harvick and Stewart in the recent past.

Well, as Gene Haas says, “crazy works.” Harvick’s first championship crown marks the organization’s second title, accomplished through the efforts of a four-car team coming together toward a common goal. Hendrick Motorsports, which supplied engines and chassis to SHR also came together late, with Harvick crediting Jimmie Johnson and Stewart, among others with keeping him grounded during a hectic week in Homestead-Miami.

Turns out aggression, in this case paid off in spades as Harvick was able to ride the wave of bold moves straight toward the title trophy. For SHR, they are shining in the spotlight after watching Harvick and crew chief Rodney Childers fight through some ugly season struggles to a championship, all while their boss goes through some battles of his own. But while Stewart struggled inside the car, a combination of on and off-track problems he remains bullish on his chances for 2015. Patrick, now aligned with crew chief Daniel Knost feels confident in her 2015 as well; sponsorship money from GoDaddy gives her the time to adjust. Even Kurt Busch was even able to end the season on a shining light, as pairing him with Tony Gibson seemed to be what was needed for the No. 41 team to run up front.

Looks like SHR is set for 2015 and beyond. So much for upsetting team chemistry…

Kevin Harvick spent 13 years at Richard Childress Racing and was treated to a lot of success. However, he always found himself falling short when it came to taking home the Cup Series title. It was why Harvick announced last year that he was moving to SHR for 2014 and, in his own words, was out “to win a championship.” Like Babe Ruth, the California native called his shot, taking the checkers first at Homestead and with it, the big trophy he’d been seeking.

The journey to becoming champions wasn’t all rosy, though. The beginning of the year didn’t start out how Harvick would’ve hoped, with four finishes outside of the top 35 inside the first seven races. Harvick and Childers fought through those embarrassing mechanical issues, keeping the focus up while working to develop their team. As Harvick got into the summer, things would take a turn as speed and consistency came with Harvick posting back-t0-back top-5 results, contending for race wins on a weekly basis. He was able to take that into the Chase and, besides a spin at Martinsville, was solid throughout en route to winning the championship with two victories in the final two events.

Battling through adversity throughout the season helped out considering how Harvick had to go about claiming the victory in Sunday’s Ford EcoBoost 400. He stayed up front all race long, remaining in contention until a pit stop for four tires while other teams either stayed out or took two put him back to 12th. He quickly got to work, though, charging up to sixth and validating Childers’ strategy when the caution flew with 14 laps remaining in the race. He then got a good final restart, taking the lead with seven laps to go from Denny Hamlin and holding off Ryan Newman in a final restart with three to go.

“The guys on this race team and what we went through at the beginning of the year to get it going, there’s not too many people that would have went through that, and I really expected people to work a couple months and realize how bad it was and turn around and walk out the door,” Childers commented early last week. “Really, nobody ever gave up.”

The trucks are known for having some of the closest competition, year after year, with new faces always emerging toward the front of the field and veterans returning to get the job done. Most young champions in the series have moved on to race in the Nationwide Series or Sprint Cup over the years.

However, Matt Crafton is one of those veterans who’s stuck around, becoming a valued contributor to the series. Each year that Crafton and ThorSport Racing have competed together, they have continued to grow and get stronger, discovering what is needed to become champions. They may have separated for a couple years along the way, but overall they’ll go down as one of the most formidable partnerships ever created in Truck Series history.

The process was exactly what Duke Thorson envisioned in 2000, when he and Crafton first met and chose to work together.

“He told me we’re going to run this like a business, and we’re going to make it better and better each year, but I’m not going to outspend myself and I’m not going to go away in two or three years.  I’m going to be one of these owners that’s going to be around for the long haul, and if you want to stick it out with me, we’ll win races, we’ll win championships, and that’s what makes it so much sweeter to be where we are today,” Crafton said of Duke. “He’s been a man of his word, and Rhonda (Thorson), as well, giving us everything throughout the years to become a two-time champion.  It’s an awesome feeling.”

No changes are expected in 2015, for either Crafton or longtime teammate Johnny Sauter, driving the No. 98. (A third team, manned by Jeb Burton is still up in the air). With such consistency in the driver’s seat, paired with solid ownership a three-peat is certainly a strong possibility for Thorsport.

Back in 2005, Dale Earnhardt Jr. moved JR Motorsports, with his sister Kelley as General Manager, up to the Nationwide Series to help develop young talent. They bought a car from Dale Earnhardt Incorporated and entered it into the season finale with Mark McFarland behind the wheel, finishing 20th. The next couple of years didn’t go as planned, armed with more wrecked cars than Earnhardt would’ve hoped for as the team struggled to find the right driver and team combination.

However, through hard work and a technical partnership with Hendrick Motorsports, things continued to grow and JRM was able to have their breakout season in 2008. Mark Martin got the team their first win that year, at Las Vegas Motor Speedway, and a partnership with Brad Keselowski gave the team a development driver that finally clicked. A third-place finish followed in 2009, and while JRM had slumped a bit since, top-tier resources remained for the right combination to be successful. This season, they finally found those dream pairings as 18-year-old Chase Elliott would take home the championship, easily outdistancing JRM teammate Regan Smith for a 1-2 result.

“It’s a labor of love, and we don’t do it because we’re padding our pockets, but we do do it because we give opportunities to people like Chase Elliott and Josh Berry and Regan Smith and Aric Almirola and Brad Keselowski and the crew chiefs that have come through,” Kelley Earnhardt expressed. “That’s the vision Dale had when he started JR Motorsports, and we’re continuing to keep that up, whether it’s crew members or drivers. That’s really the passion that we have for us and our employees.”

They have also stuck to their guns throughout the process, continuing to develop young talent. Keselowski got his start with the team, and moved on to win a Sprint Cup Series Championship in 2012 for Team Penske. They continue to run their late model program in helping young drivers get a start; Berry and William Bryon had success this year, finishing one-two in points at Hickory Motor Speedway.

FIVE: Kyle Busch Motorsports’ success and outlook for next year

With each season in the NASCAR Camping World Truck Series, Kyle Busch Motorsports has experienced growth, winning their second straight owner’s championship this year with their flagship No. 51. Erik Jones and Kyle Busch split the schedule in 2014, scoring 10 victories, 14 top 5s and 17 top 10s in 22 races. Darrell Wallace, Jr. also had a good season, manning the team’s No. 54 as he finished third in points with four wins.

“My time at KBM has been great so far, to be a part of two owner’s championships,” Jones said. “It’s been a great year not only for KBM but Toyota and everybody involved.  Just cool to be a part of it all, having a lot of fun, and really looking forward to getting going next year.”

The success from this past season has brought expansion opportunities, even though crew chief Eric Phillips and Wallace move on to Joe Gibbs Racing’s Nationwide Series program. Starting in 2015 Jones, who has ran a partial schedule the past two years, will run the full slate in search of a first series championship. Justin Boston is also set to join the team, running the full schedule in search of the Sunoco Rookie of the Year Award, while Busch splits the schedule with Daniel Suarez and Matt Tifft in a third truck.

The NASCAR Camping World Truck Series struggled at some points during the season, running short fields as sponsorship was hard to come by. This expansion news is great for them, as it looks like the Trucks will come ever closer to having a competitive, albeit smaller grid in 2015 as the field shrinks from 36 to 32 trucks. As for KBM, most of all it shows they’re stable, grounded in the Truck Series and capable of remaining strong contenders there not only next year but beyond.

I’ve never heard Tony Stewart endorse Gene Haas’ hiring of Kurt Busch. I certainly could be wrong, but sometimes I think if Stewart was the sole owner, Busch would again be looking for a ride.

I agree with that as well. Haas is paying the bills for KuBu, it doesn’t mean that Tony likes it.

Stewart has an edge—Mr. H.

Certainly the HMS connection was a major advantage. If I remember correctly Harvick wasn’t so dominant while their cars were in contention for the title.