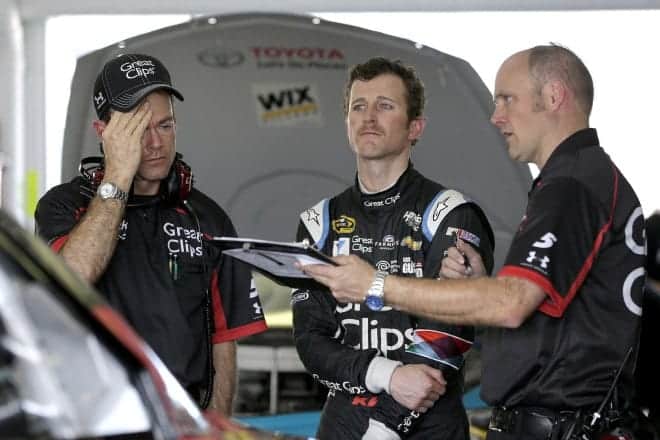 The NASCAR season may be over, but Wednesday morning proved that the work continues. Hendrick Motorsports announced a couple of personnel changes for Kasey Kahne’s contract year in 2015. Effective immediately, Kenny Francis, who served as crew chief for Kahne since the final race of the 2005 season, moves to the vehicle technical director position for the organization. According to the team release, Francis will “oversee organization-wide car design and development with day-to-day management of Hendrick Motorsports’ chassis, body, research and development, on-track testing, vehicle engineering and simulation programs.”

“When it was clear there was a need for this role, I was very intrigued and felt it would be a great challenge,” Francis said. “It encompasses areas I’m passionate about, and I know we can make a difference for our teams, especially with the new rules for next year. There are a lot of reasons why it feels right at this point in my career, and I’m looking forward to contributing in a new way.”

Meanwhile, Keith Rodden, who served as crew chief for Jamie McMurray during the 2014 season, will be reunited with Kahne as crew chief. The pair had previously worked together when Rodden worked as a team engineer. He began with Andy Petree in 2003 and moved to Evernham Motorsports on the Nationwide side in 2004 before moving to the No. 9 Cup team in 2006. Rodden moved, along with Kahne and Francis, to HMS in 2012.

“Opportunities like this don’t come around often,” Rodden said. “The people at Hendrick Motorsports are like my family, especially in the 5/24 shop. I expect we’ll have great chemistry right off the bat, which should make for a smooth transition. I’m looking forward to hitting the ground running with the No. 5 team and everyone who supports us. There’s no better resource than Kenny, so I hope he’s ready for some late-night phone calls.”

Kahne and Francis worked together for nine full seasons and garnered 16 victories and five Chase berths, including a best finish of fourth in the 2012 standings. But 2014 was a down year for the duo in a season where they scored just a single win, three top 5s and 11 top 10s in 36 races. Additionally, there were five DNFs and eight finishes off the lead lap.

“I’m so grateful to Kenny and happy for him and his family,” Kahne said. “He’s one of my biggest supporters and best friends, and I’m excited about his new role. It’s going to give all four Hendrick Motorsports teams the best possible opportunity to win races and compete for championships.

“Bringing Keith back is big for us. We spent 10 years together, so we have a very strong overall relationship and understanding of how to communicate. There’s a great friendship and a lot of mutual respect, but at the same time I know he’s really going to push me. I trust Mr. Hendrick to put the right people in the right places to make us successful, and I know these decisions will do that.”

Glad to see that kasey is getting a new crew chief. Kasey and kenny won races together but they were never consistent in there time together. How many times did we see kasey start at the front of the pack and every pit stop bad adjustments put him further and further back in the pack. Too many. When the car was right kasey was at the front, just didn’t happen enough.

It’ll be interesting to see how much time Mr. Rodden spends in the Xfinity garage next season getting to know his driver in 2016, Chase Elliott.