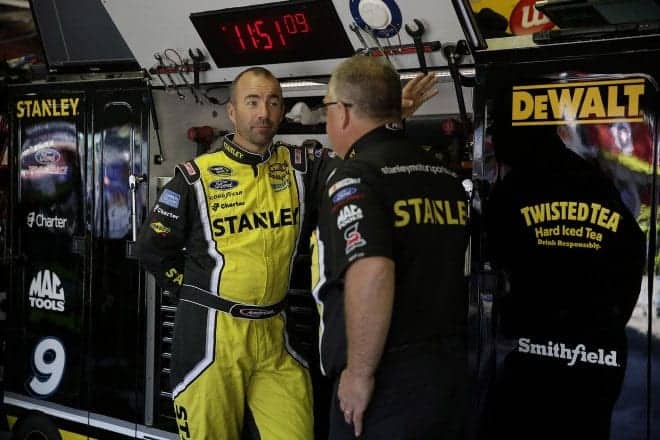 As NASCAR descended on Homestead-Miami Speedway last weekend, much of the focus was on the final four drivers heading into the race that would decide who went home as the 2014 Sprint Cup Series champion, and rightfully so. But what the two hours of pre-race coverage on ESPN, along with much of the race broadcast and post-race coverage, missed out on was the other storylines to watch during the event.

First and foremost was Jeff Gordon starting on the pole just one race after he’d been eliminated from Chase contention by a banzai move from Ryan Newman that was just enough to give him the edge over the four-time champion. In a season of what might have been, Gordon wanted to put an exclamation point on what could easily have been his fifth championship season if not for a flat tire at Texas Motor Speedway. While Gordon went on to lead eight times for a race-high 161 of 267 laps, a flurry of late-race cautions left him in need of fresh tires. The resulting pit stop with just 13 laps remaining left the driver of the No. 24 Chevrolet to restart 23rd. Though he gained a substantial number of positions, Gordon was left to end the season with a tenth-place finish in a race he could have easily won.

Meanwhile, a couple drivers made their final races with their current teams, or in Marcos Ambrose’s case, his final start in NASCAR. The Australian came to NASCAR in 2007 and ran two full-time seasons in the Nationwide Series before moving up to Cup. After two years with JTG-Daugherty Racing, Ambrose joined Richard Petty Motorsports in 2011 and finally was able to break through to Victory Lane at Watkins Glen later that year. He snagged the win at the same track once again the following season and closes out his NASCAR career with two wins, 18 top 5s and 46 top 10s.

In his final race, Ambrose wanted nothing more than to end his tenure in NASCAR on a high note. After starting 17th, he struggled with handling on the No. 9 Ford for much of the early stages in the race. But a late tangle with the wall left him to limp home in 27th, definitely not the way he wanted to close out the year. Ambrose will head back to Australia where he’ll race in the V8 Supercar series for the newly-formed Team Penske.

“It’s been the story of our year, just fighting and gouging and trying all the way to the very end,” Ambrose said after the race. “I finished all the laps here tonight, so we’ll take it. It wore me out.

“I’m just tired, to be honest with you. I’m feeling the effects of a hot night here in Miami. The car was handling rough and I was fighting it, but that’s what makes NASCAR so great. I’m going to miss it, no doubt about it. It’s bittersweet for me, but I’ve got a lot to look forward to and a lot to be thankful for.”

Ambrose isn’t the only driver parting with his team, though. Carl Edwards announced earlier this year that he would be leaving Roush Fenway Racing at the end of the 2014 season, and in one of the worst kept secrets in NASCAR, all of the speculation that had him following former teammate Matt Kenseth to Joe Gibbs Racing turned out to be true. While his numbers were far from outstanding (only seven top 5s and 14 top 10s), Edwards did make the Chase with two wins and made it through two rounds before being eliminated.

On Sunday afternoon, Edwards and the No. 99 team wanted nothing more than to send the 2014 season off with a bang – and they did. But it wasn’t the good kind of bang. First, Edwards collided with Alex Bowman, and if that wasn’t enough, a flat tire sent him spinning into the outside wall. Despite being able to repair the car enough to get back out on track, Edwards was left to settle for a 34th-place finish, four laps off the pace.

“I had a flat right-rear,” Edwards said. “I was having some fun racing with some of those guys. I went under Austin Dillon and I heard a noise and I thought, ‘Oh, somebody’s engine is blowing up,’ and it was my tire flapping and I just drove in there and backed into the fence.

“If I would have been just a little bit quicker realizing what was going wrong I think we would have still had a good finish, but I had a good time. We finished the race and got to race a little bit there at the end with Michael Annett and that was fun.”

Perhaps one of the most prominent goodbyes that was said on Sunday after the checkered flag flew was the one between Dale Earnhardt, Jr. and crew chief Steve Letarte. Having suffered through two of the worst years in his career in 2009 and 2010, Earnhardt, Jr. was given Letarte, who had just a single win with Jeff Gordon in the previous three years. The shake-up was apparently just what Junior needed. Though the duo didn’t improve much during the 2011 season, the three years after saw the driver of the No. 88 Chevrolet reach at least 20 top-10 finishes.

Fast forward to 2014, and Letarte was in a “lame duck” season as he had already announced his departure from Hendrick Motorsports to take on an analyst position with NBC Sports that would home and closer to his family more often, allowing him to be the dad he wants to be. But that didn’t stop Earnhardt from making the most of his season. With four wins and 20 top-10 finishes in 36 races, the duo made the Chase and moved on before failing to make the cut in the second round of eliminations. But just one week later came an emotional win for the No. 88 team at Martinsville, one that highlighted the pure, raw emotion that helps to bring the drivers closer to the fans. In their final race together, Earnhardt and Letarte overcame an unscheduled green flag pit stop, courtesy a cut tire and got back on the lead lap for a 14th-place finish.

Working with @SteveLetarte was better than I could have ever imagined. The friendship that came with it has changed my life forever. #Cheers

Yes, the focus needed to be on the championship, especially in a season that didn’t have us headed into the final race waiting for a driver to cruise around and finish 21st to lock down the title. But to forget about the rest of the field is to just assume there were only four cars out there on the track. Each and every one of these moments deserved their time in the spotlight too.

Best of luck to you Marcos it was always a pleasure when they talked about you and gave you TV time.

too bad the focus on the chase left out every other team on the track. Unless you kept an eye on the crawler, you had no idea where any other driver was on the track. Or even IF they were on the track. Ridiculous.