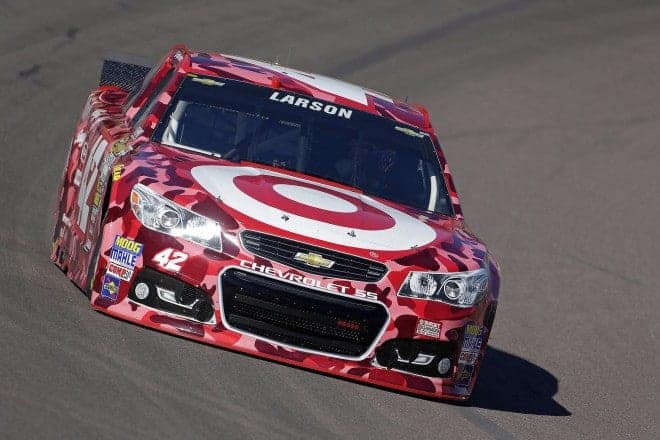 The following is a brief overview of the fantasy booms, busts and those with hopeful futures if you are wondering about next year.

Two teammates who were a bit of question mark coming into the season were Team Penske’s Joey Logano and Brad Keselowski. Logano had always been a driver with promise, often dominating in the Nationwide Series races, but had never seen that come to fruition in the Sprint Cup Series. That all changed this year as he had five wins and 22 top 10 finishesl. And Logano just wasn’t hanging around lucking into those types of finishes. He led 1,004 laps this year and was one final four drivers standing in the Chase for the Championship at Homestead.

Yes, it’s true the Keselowski was the 2012 champion, but when Penske switched to Ford in 2013, it was less than an ideal season for the team. Keselowski was not one of the 12 to make the Chase last year and with the struggles that Roush Fenway Racing, which also races Fords, had, there were questions on if the Penske guys could reach that championship level again. But Keselowski responded by winning six races and leading 1,582 laps, second most behind 2014 champion Kevin Harvick.

And speaking of question marks, Harvick moving over from Richard Childress Racing to Stewart-Haas also put into question on whether he could contend for a title or not, especially in his first year. All Harvick did though was win five races, including the last two to capture his first crown. He also ended up leading a series high 2,148 laps, almost 600 more than Keselowski. Harvick’s cars were fast from the beginning, it was just a matter of him being able to finish races. He and crew chief Rodney Childers figured that out eventually and they were on their way. So really, even though this title chase came down to the final few laps of the final race, the most dominant car throughout the season ended up winning the title.

Another driver whose performance might have been considered a bit of surprise is that of rookie Kyle Larson. Sure, it looked like he was going to win a race in his rookie season, but that never materialized. What did happen was that it became evident that Larson has all the tools to be a star in this sport for years to come. He finished with 17 top 10 finishes, more than second-place Chase finisher Ryan Newman, but missed the Chase because of some poor finishes for a variety of reasons, completing 10,242 laps, more than 400 less than Newman who led the series in that category.

A driver who had big expectations for himself coming into the season was Tony Stewart, but it all went wrong at a dirt track on a Saturday night in August for the second year in a row. This time he didn’t injure himself physically, but was involved in an accident that led to the death of sprint car driver Kevin Ward. The immediate on-track result was that Stewart missed three races, partly out of respect for the Ward family, but also to deal with his own grief. Eventually, Stewart did return to the track, but it was clear, whether simply because of the missed time on the track, the emotional toll of being involved in the Ward incident, or maybe a combination of both, that the No. 14 team and Stewart just wasn’t ready to compete for victories right away. The result is that Stewart did not win a race for the first time in his Sprint Cup career. Pretty much everyone had to think with just one win needed to make the Chase under this new format, that Stewart was a lock to return to the Chase. But in the end, partly due to the missed races, he finished 25th in points and had seven top 10 finishes. It will be good for NASCAR if Stewart can return to prominence as a legitimate championship contending driver next year.

While this was Austin Dillon’s rookie year, he did come in with some high expectations, especially since it was the return of the famed and revered No. 3 to the track. But despite beginning the season on the pole at Daytona, Dillon’s season was mostly unremarkable. He managed just four top 10 finishes this season. And as the year went on, it was apparent that Larson and his team had a leg up on Dillon and his team.

A driver who was a rookie last year and that many thought would make nice jump and at least contend on occasion this year was Ricky Stenhouse, Jr. But it was more a surprise than a regularity to see Stenhouse running the top 10 at any race. He finished 27th in points and had just five top 10 finishes. But maybe the most telling statistic of Stenhouse’s season came in the laps led category. He was the only driver in the top 34 in points to not lead a single lap this season.

BACK TO THE FUTURE

One of the bigger questions now is just who will be that breakout driver next year.

Of course, there is Larson, who since he didn’t win yet and did not make the Chase, still has some things to prove when it comes to the final results. However, if you picked Larson late this year, or got him cheap in a budget league, that likely won’t happen again in 2015. Larson would be my No. 1 breakthrough candidate for 2015 when it comes to winning races.

While Carl Edwards did win two races this year, it will be interesting to see if the jump to a new team showing immediate results trend will continue has Edwards will go from Roush to Gibbs. When ex-teammate and now new teammate Matt Kenseth made the same switch two seasons ago, it led to Kenseth winning seven races and finishing second to Jimmie Johnson in the title hunt.
Another big question for 2015 will be if Stewart can return to his form. He hasn’t won since the 2013 spring race at Dover and at age 43, he’s not young by NASCAR (or any sport’s) standards any longer. My guess it that Stewart’s days of being a dominating car on the track are finished, but that he will return to victory lane and be in the Chase next season.

While the finish for the real-life title was exciting, that turned out to be the same way in the race to win the Frontstretch Fantasy league title, too. In the end, LeftTurnOnly came from behind and defeated NoBarNASCAR 9,574 to 9,572. LeftTurnOnly seemed to be in good shape, only to have one its picks, Jeff Gordon come in for a late pit stop. But Gordon rallied to finish 10th. LeftTurnOnly’s other picks for the final race were Jamie McMurray in fifth, Justin Allgaier in 15th and Brian Vickers in 23rd. If NoBarNASCAR is, or was, a Roush-Fenway Racing fan, that might have changed after Sunday. That’s because it had picked Carl Edwards, who finished 34th and Greg Biffle, who was 41st. The sixth-place finish of Matt Kenseth and also picking Allgaier wasn’t enough to overcome the Roush’s poor showing.

The top score of the final week went to Bundy’s Bombers with 346 points from the team of race winner Kevin Harvick, second-place Ryan Newman, then McMurray in fifth and Kyle Larson in 13th.

Frontstretch thanks all of those who competed this year and we hope to make the league bigger and better next year.

Jeff…….What did I win? The right to come back next year? Thanks and I enjoyed playing in your league!!

I guess your prize is just as meaningful as the one Harvick got at the end of the manufactured-excitement-chase!

All kidding aside, how does one join this fantasy league? I didn’t realize Frontstretch had one until now, but I might join next year. But I clicked the “join fantasy league” at the top of the website and Yahoo gave me an error: “There was a problem: You are not a member of this group. (Error #113)”