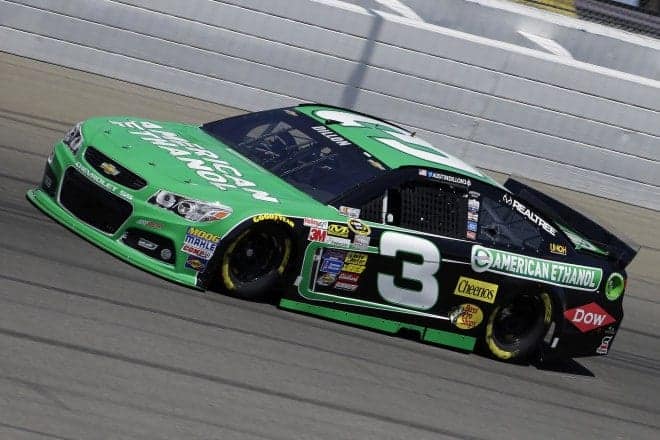 The 2014 season is over, and NASCAR’s gained the highest degree of attention – positive or otherwise – it’s received in years.

And yet, you’re not happy.

That’s certainly the case for many fans and viewers of the sport, who look at the experiment that was the new Chase format with disdain, even outrage. The company line is that NASCAR’s better off than it has been in years, buoyed by encouraging ratings toward the end of the playoff, heightened social media interaction and two straight at-track sellouts to close the year.

Fan reaction? It’s all over the board. You may agree that what’s occurred over the past year, or even the past few months, is crucial and important for the sport. You may disagree, perhaps more vehemently than you ever have before about anything with NASCAR attached to its name.

What do I have to say about it all? Take a breather. Luckily for each side, both of whom are probably sick and tired of fighting about it at this point, this column has little to do with the Chase and its effects. You’re safe for the 10-or-so minutes it’ll take for you to read this column.

The 2014 Sprint Cup Series season may not have been all happiness and butterflies, but its feeder divisions – the Nationwide and Camping World Truck series – produced quite the encouraging number this year, one that just may suggest good things to come across NASCAR, regardless of what the championship format may be.

Remember a few years ago in the Cup Series? It was struggling to get new faces into its cars, both as rookies and in general. Drivers like Kevin Conway and Andy Lally were rookies of the year simply by starting all the races, disappearing from the circuit the year after their victories. It was a surprise if we got a large amount of Cup debuts in a season, even more of one if a rookie class came along that involved more than one driver actually running the full schedule.

Of course, 2014 changed all that, with eight drivers declaring for the rookie title at the beginning of the season. Only six made it through the entire year – a seventh (Ryan Truex) nearly getting there as well – but even six was an incredibly encouraging number. Even more optimism was generated when two of those six, eventual winner Kyle Larson and Austin Dillon, competed for top 10s and wins in addition to the freshman award. In 2015, for a split second we’ll see that number cut down again; Trevor Bayne is the only confirmed, full-time rookie ready to run for the award as of this writing.

I doubt it’ll stay that way for long, though. In the lower series, a trend’s been brewing that could mean a continuing stream of rookies in the Cup Series, or at least a steady flow of newbies.

In 2014, 41 drivers made their first start on NASCAR’s national series level, be it in the Cup, Nationwide or Truck series. That’s not counting drivers like Michael Annett, who made his Cup debut but had run in the Nationwide Series for many years before, or even Corey LaJoie, an infrequent competitor in the Nationwide Series prior to his Cup and Truck debut. We’re talking drivers like Dylan Kwasniewski, Ben Rhodes, Daniel Suarez, Milka Duno, JR Heffner – competitors who had never ran a points-paying race on any of the three national circuits prior to 2014.

And things haven’t been this good in four years. The 41-driver mark is a six-person increase from 2013, and five better than 2012. Then there’s the 2011 count, which was a mere 32. The last time the trend ticked upward, to this degree was 2010, when a total of 49 drivers made their NASCAR national series debut. Among the rookies that year: Danica Patrick, Cole Whitt, Ryan Truex and Nelson Piquet, Jr.

But while 2010 may have featured eight more newbies than 2014’s amount, it’s worth pointing out that this year’s crop – along with some of the drivers who debuted in 2013 – seem to have even higher ceilings than their predecessors.

That’s due in part to the lowered age restrictions for the Truck Series. With 15-year-olds now able to race on the series’ smaller tracks, the talent pool expands a little early, hot new drivers getting a jump start where they might have had to wait in the wings in previous years.

So it comes as little surprise, then that many of the top contenders of the 2014 rookie class are still in their teens. In came drivers like Rhodes, who managed three top 10s and an average finish of 11th in four races for Turner Scott Motorsports. Then there was Gray Gaulding, a 15-year-old driver who struggled through some growing pains through nine starts but showed flashes of major potential. And who could forget Cole Custer, the victor at New Hampshire Motor Speedway who became the youngest winner in national series history?

But the high schoolers weren’t the only ones with their share of triumphs. Kwasniewski made the leap past the Truck Series into the Nationwide Series full-time f0r Turner Scott and won the pole at Daytona right off the bat, ending with three top 10s in his rookie season. Cale Conley ran a part-time schedule for Richard Childress Racing and impressed with a number of solid runs. Justin Boston, who will run in the Truck Series for Kyle Busch Motorsports in 2014, made his maiden voyage into NASCAR’s national series and scored a 10.5 average finish in two starts for Joe Gibbs Racing in the Nationwide Series. Daniel Suarez, Austin Theriault, Matt Tifft and Cameron Hayley also made strong impressions, some of which have, like Boston, led to looks with major teams in 2015 on full- or part-time bases.

It’s a strong list that seems poised to get stronger. Coupled with a 2013 class that, while smaller, yielded 2014 Nationwide Series champion Chase Elliott, Erik Jones, Tyler Reddick and John Hunter Nemechek, among others, suddenly things are looking just fine down at the sport’s lower levels.

In fact, more than ever it looks like a raw, talented crop of youngsters is rising through the ranks of NASCAR. From the offspring of former champions to new blood with a lot to prove, it appears as though the lower national series will be gaining all kinds of fresh talent about which we can really give a damn, rather than unfamiliar faces that disappear a year or two later. In 2014, the possibilities soared even further, especially with many snagging full-time rides next season.

Gone, perhaps, for now are the years of the tiny, underwhelming rookie classes. And with drivers like Jeff Gordon, Tony Stewart and others potentially approaching retirement, it couldn’t come at a better time.

Good article – Shocked I must say, that Kahn got an extension until 2018! Riddle me that one…

Where will Chase go unless,

Where will Chase go unless

I’m baffled on that one also. He’s pretty crappy the past few years… Hendricks
wife must think he has a cute butt.