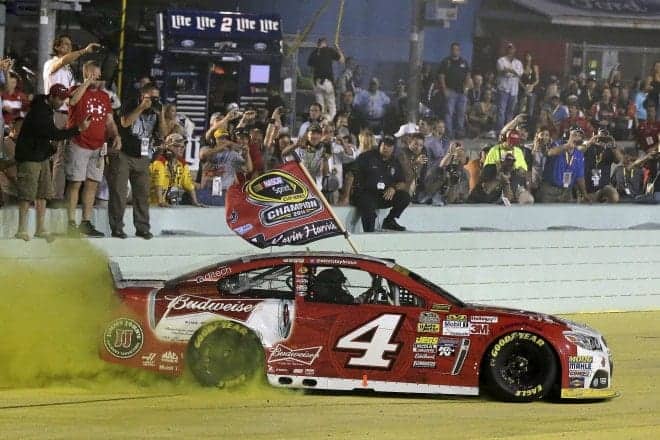 I will admit when I am wrong.

In April I wrote about how despite its winning ways, consistency was still necessary for Stewart-Haas Racing to contend for the Sprint Cup.

Well, I was half wrong. Consistency still played a part heading into Homestead-Miami Speedway, but I certainly did not think Kevin Harvick had a realistic chance months ago due to his fluctuation of finishes.

Given any sort of points system there is no doubt in my mind that Harvick is a deserving champion at the NASCAR Sprint Cup Series level. The question that must be asked now is will this new format, which seems to have split reactions between those for and against, sustain over time. Will it be this thrilling and unique event at Homestead every year, or will it eventually turn into a usual and monotonous moment?

The hype has done what it should for this year. The season concluded with track sellouts and slightly higher television ratings, but that momentum now needs to ride into the first 26 events of the 2015 season. The Daytona 500 should have no problem attracting viewers with its prestige, as well as the return of the sport’s top level after three months of hibernation. Each facility does a tremendous job at telling the public why its event is the must see show of the year. The television networks put a good amount of effort promoting that their program is the one to watch on a particular Sunday afternoon or Saturday night. NASCAR markets its sport like many other professional organizations, but I feel like this is where the communication needs to get even closer.

On a couple occasions throughout the season I spoke about how some tracks are doing it right in regards to fan engagement. NASCAR needs to work hand-in-hand with them to get the word out, and in addition work with the broadcasters and air what the fans sitting on their couch at home are missing. Richmond International Raceway had a massive post-race Chase party and I hardly remember seeing anything about it on ABC. It was a rather popular topic on Twitter, but as viral as social media can get it still does not amount to the number of eyes and long-term attention that are laid on a TV screen. Even if there is a disconnect, the fan still has the final word in the direction this sport goes at the professional level and in its entirety.

If you like what you have seen throughout 2014, then ignore the naysayers and get out there and support it as much as you can. If you are on the other side of the fence, instead of complaining week in and week out, shut off the television, cancel those tickets and head out and support your closest local short track. If you long for the simple times where stock car racing was not compared to or transformed to be similar to other professional sports with Game 7  moments or playoff drama then you will feel at home.

If enough people actually show an interest and gravitate toward the grassroots then something will need to be done at the top. We witnessed the results of much feedback come to fruition with the NASCAR Camping World Truck Series at Eldora Speedway the last couple years. The powers that be will have to listen.

This moves toward one of the points from which I feel we have gotten away. So much focus has been shifted toward creating an exciting championship that we have forgotten a major aspect of auto racing: the event itself. Of course some events are going to have more prestige in the eyes of competitors and fans, but each and every one of the 36 points-paying races should be something extraordinarily special in its own way. Having potentially the biggest moment in NASCAR history should not be at Homestead-Miami Speedway every year, no offense to the track as it produces some pretty stellar racing for an intermediate layout. We are taking an idea of winning having a more important role, all the while ignoring important winning milestones.

Jimmie Johnson won his 70th career race at Texas Motor Speedway. Did anyone notice? After a strong season, Jeff Gordon is reaching numbers that mirror Dale Earnhardt and Richard Petty in their eras. Whether you think he is a four-time or a seven-time champion, that statement cannot be denied. I fear that we are teetering along the line where championships could vastly overshadow versatility. Drivers like Johnson, Gordon and Tony Stewart being versatile enough to win on almost every single track or configuration on the schedule should be celebrated rather than getting lost as an afterthought.

That’s my take. What is yours? It is in your hands after all. We are each just one person, but as a whole making our own unswayed decisions will steer the future.

..we have been screaming your points and other points for years, and they have fallen on deaf ears. In fact it has angered the Silver Spooned Dictator so he seems to dig his heels in even farther to enrage what brought his family to prominence and wealth in the first place…On the backs of The Average Joe…The Fan.

I am so infuriated after Dega I deleted everything related to Nascar off my dvr. I did not watch the last four races and will not watch anything next year after fourty years of attending or watching the races. My wife is still in shock. Next year restrictor plates everywhere, really? Radial tires(I miss the tires smoking) mandatory springs,shocks,rear gears,fixed spoiler angles,tire pressures and now horsepower! I thought it was a race. It used to be exciting to find out what Junior was going to come up with next. Remember the shaved intake bolt heads? Rudd’s air bags that he could adjust with his clutch pedal. That stuff was ingenious. Not Mikey’s sterno packed intake but I’ll give him credit for at least trying. I have taken a stand and Nascar will come back to all 36 races meaning something or I am done!

unfortunately NASCAR’s future is not in the hands of the fans, it is in the hands of Brian France. He is great at bringing in $ for the France family but otherwise, he doesn’t care a whit about the fans or racing for that matter.

Cancelling tickets, well, I’ve already been doing that for the past few years and this year there will be 2 more out. Stop watching TV? that’s pretty much a given for me, too. Listening to the idiots on Fox blather on about nothing and never actually covering the race, which was then followed by ESPN’s chase, chase, chase has produced no reason to watch NASCAR.

The coverage is bad. Gordon hit a milestone in wins this year as well and it was hardly mentioned. It’s all Chase, Chase, Chase. It’s also “Nations” now. Could this get any more hokey?

As far as know there were only 4 drivers racing in the last race. the other 39 were hardly or never mentioned

Yeah, I thought the same thing – who dreamed up the “Nations” garbage? The only fan base that I ever heard referred to as a nation was Jr’s fans and that is fine, but to try and sell that nonsense to the rest of the fanbase, well, it must have been some genius (not) PR guy.

Screaming them on social media while race attendance and viewership remain at profitable levels accomplishes nothing. Either the social media commentary is in the minority, or the the commentary from the fan is legit but the fan goes or watches anyway. In other words, until NASCAR sees the significant dent in its profit margin as fans leave in droves and do not consume the product, then the product will stay.

right on make money is all the France Family cares about

its easy to tweet and post on Facebook. And those numbers are easily measured, we do it all the time. In fact its one of the first things I do when I open the store. However they dont always correspond to fans or people buying in to your product.

This season was a farce.

kb
Reply to  Don in CT

I totally agree. Never was or will be a fan of the chase

What sell out tracks??? Does covering up a large number of seats with ads help sell outs with reduced seats? What races did the author watch?
What planet are you from if you believe fans determine nascars decisions! There will come a day of reconing when the tv networks wake up and find that they cannot sell enough commercials to pay nascar for the privelege of televising a dieing series. As it is now, commercials are crammed in so often that it a difficult to watch a race. Just my opinion, and I’m aware of human anatomy and opinions.

What worries me is that with so many channels and so much time to fill NASCAR will have no real reason to worry much about the quality of the product. How else do you explain the truck series, NOBODY is watching! As long as fools like the people at Sprint, Xfinity, and Camping World or any of the individual team sponsors are willing to spend big money for limited exposure the France’s will have little reason for concern.

To think that fans control Nascar, or have any real input into its direction is a bit naive if you ask me. At the same time to think that the Chase is the basis of all the problems is equally short sighted.
Regardless of what we think the show will go on. The only changes will be the intensity of the drum beat from its supporters, and their declining numbers.

I agree with some of the above. But, Most race fans, Real race fans. Help Nascar rise continue ever year up into the late 90’s. When Brian France started his personal ideas of changing this and changing that is when Nascar started downhill and continues strut his stuff and continue to go downhill. The Homestead was a exciting race. But the chase system killed the prestige of “The Championship’ ( Nothing against the 4 team) They played by the current rules. I’m a Real Race Fan of the “Winston Cup” era. As it has been posted in many media outlets Dale Jr. would have won the Championship in 2013 and Jeff Gordon 2014. Just think, how many Championships Jimmie Johnson would have won if this chase system was used earlier in decade? It would not be six. The best way as have been stated above is stop watching and stop going to Brian’s Events.

Yes NASCAR will be selling out for the races.. They are doing this by taking out seats and closing sections.
Daytona has plans to downsize