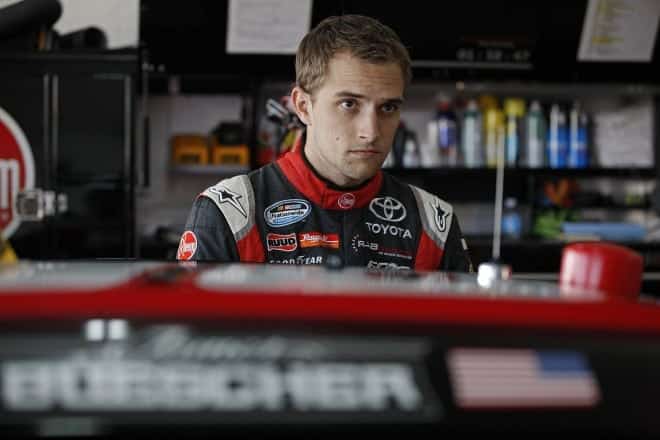 High Point: The Bristol night race, always the highlight of any season brought James Buescher a brief respite from what was otherwise a nightmarish year. Avoiding the wrecks, he remained a lead-lap car and kept the No. 99 Toyota solidly within the top 10. Ninth, after a year filled with disappointment had to seem like a win in front of a relatively large TV audience.

Low Point: Buescher had a decent run going at Charlotte this fall, an attrition-filled event before problems struck on lap 74. Contact between Ty Dillon and Eric McClure left Buescher an innocent victim, trashing his No. 99 into pieces while ruining his night at arguably the driver’s biggest strength: an intermediate track.

Summary: With all his prior Camping World Truck Series success, including winning the 2012 series championship, it was easy to place high expectations on Buescher in his move up the NASCAR ladder. Moving into a full-time Nationwide Series schedule, he already had a win in the sport’s second-tier series: Buescher won the Daytona season-opener in February 2012.

However, high hopes were dashed early and often for Buescher as his rookie ride never came up to speed. Buescher spent much of 2014 searching for consistency, handling, and luck as he and his No. 99 team struggled to place themselves in contention. They never earned a single top-five finish, led just six laps and finished well over 300 points behind eventual series champion Chase Elliott.

It was clear something was missing at RAB, who’s put together a promising program as an underdog operation but yet seemed to take a step back with better financial support. Even a midseason crew chief change didn’t fix things, making this operation one of the series’ big disappointments of 2014.

2015 Outlook:  Buescher’s season hinges on one word: sponsorship. Buescher’s longtime backer Rheem, who moved up with the youngster, has made the move to back Austin Dillon and the No. 33 car of Richard Childress Racing next year in the Xfinity Series. With funding now the number one concern, what will its reduction have on Buescher and RAB Racing as they look to improve upon a 10th-place points effort in 2014?

Toyota’s support, along with that of father-in-law Steve Turner (involved in his own ugly financial issues within NASCAR) may be needed to keep Buescher running full-time in a competitive ride come Daytona in February.