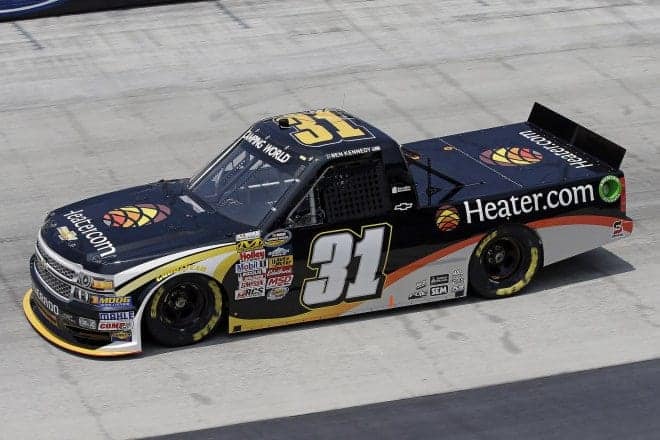 High Point: Kennedy led the rookie points for much of the season, but a late string of top-10 finishes by part-time driver Tyler Reddick put him in position to snag Rookie of the Year honors despite a limited schedule. After a Talladega wreck for Kennedy, causing a 28th-place result and a number of missteps down the stretch this youngster found himself in a dogfight. However, at the season finale a late-race spin for Reddick allowed Kennedy to seal the deal, nursing his ill-handling truck to 17th at Homestead and earning the coveted Rookie of the Year award. At the time the checkered flag flew, Kennedy also became the first member of the France family to complete a full NASCAR season.

Low Point: Though he was involved in a few on-track incidents throughout the season, Kennedy posted just a single DNF, and surprise, surprise, it came at Talladega. A track often known for its tight fields and spectacular wrecks, the superspeedway chewed up Kennedy’s truck and spit out pieces across the track. The rookie was a victim of a quick move by Joe Nemechek, one that clipped the back end and sent Kennedy’s truck up on its side before coming to rest back on its wheels.

Summary: It was a learning year for Kennedy, moving up from the K&N Series as he hadn’t raced a truck on the majority of  scheduled tracks. Often running better than he finished, the driver of the No. 31 Chevrolet at least walked away with a better understanding of how to race within NASCAR’s top three series. Though he once sat as high as sixth in the standings, consistency becoming his forte some early potential fizzled in the face of an ownership squabble that nearly closed the team.  The turmoil became distracting and Kennedy struggled down the stretch; he posted just one top-5 finish in total this season and slipped down to ninth in the final points tally.

2015 Outlook: Turner Scott Motorsports’ plans for next season are largely unclear at this point, though sources point to the team being dissolved completely. That leaves Kennedy with a big question mark about where he might end up, although the driver plans to remain full-time in the Truck Series for 2015. As long as Kennedy can keep his sponsorship, the France family name (he’s the nephew of CEO Brian France) means finding a team with an opening won’t be an issue.