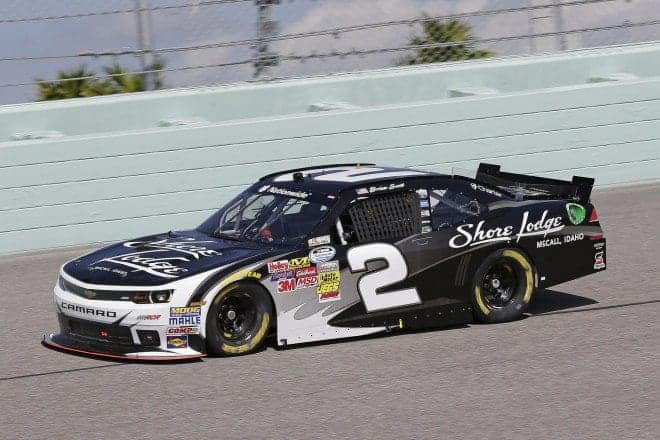 High point: Scott was the most consistent of Richard Childress Racing’s three full-time drivers throughout the season. Although he failed to score a victory, the 26-year-old finished top five in points for the first time in his career. At Mid-Ohio, he led 39 of the 90 laps, but failed to win after Chris Buescher and Regan Smith were able to get by him following multiple strategy calls. The top-five result led Scott to have plenty of momentum for the rest of the year as he recorded top-15 finishes in every race thereafter.

At Kentucky, he nearly chased down his teammate Brendan Gaughan in a 1-2-3 sweep for RCR, but he came up short of capturing his first Nationwide Series win. He ran inside the top five throughout the race, and with a solid pit stop towards the concluding laps of the event, he set his sights on the trophy. That race at Kentucky showed off Scott’s strong point throughout the year, which was at the intermediate tracks. The organization also enabled him to run a few races in the Sprint Cup Series, including Talladega, where he won his first career pole award during knock-out qualifying.

Low point: There weren’t too many weak spots for this team during the 2014 season. However, Scott struggled through the first seven races of the year. With six finishes of 11th-17th in that span, it likely took away his shot at winning the title due to the lack of momentum. But he did have one DNF on the year, and it just happened to be at Talladega. His career at the restrictor-plate track has been sub-par with just one top 10 result and three DNFs.

Summary: 2014 was a career year for Scott, who was working with Gould for the second consecutive season. He never had much success at Joe Gibbs Racing with Kevin Kidd, yet Scott and Gould clicked with multiple teammates running full-time for them to rely on. Throughout most weekends, he was the strongest driver in the RCR camp. Although Ty Dillon led the team with seven top fives and 24 top 10s, Scott was more consistent, and when he wasn’t inside of the top 10, he was just outside of it. He nearly earned a top-three finish in points, but Elliott Sadler, who will have Gould as his crew chief in 2015, came on strong in the final two races to take that position away.

With an opportunity to race a few Cup races, he was able to gain valuable experience, and it paid off with 16 top 10s in the final 17 events. If he needed a little extra motivation this season, he had it as he married his long-time girlfriend, Whitney, eight months ago and they recently welcomed a baby boy into the world.

2015 Outlook: After having much success in 2015, Scott is still win-less in the Nationwide Series. Since Gould is on the move, RCR has signed Mike Hillman Jr. to lead the No. 2 team. This will be the first time since he became a crew chief in 2005 that he will be on top of the pit box full-time in the Nationwide Series. Along with his full season of Xfinity Series racing, Scott is expected to run approximately 10 Cup Series races for RCR. If they can keep the momentum going from last year, Scott will not only be contending for race wins, but the championship as well.