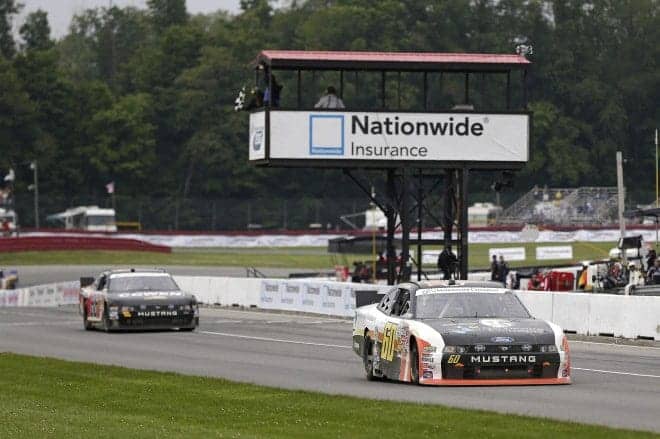 Low point: Failing to qualify for the season-opener at Daytona International Speedway.

Buescher’s journey to victory lane at Mid-Ohio did not come as easily as A to B, however. In the next seven races following Daytona, Buescher had only one top 10 but seemed to finally find his groove afterwards by finishing in the top 10 in four of the next five events. Results seemed to ebb and flow in such a way for Buescher for much of the season, but still stayed within the top 10-15 range, and that’s with Sprint Cup Series drivers competing in the races every weekend.

The win at Mid-Ohio was no small feat either. Graves was on the radio in the final laps of the race telling Buescher they were short on fuel while Buescher was holding a lead of over two seconds. Yet even with that concern, Buescher was able to win the race and do a celebratory burnout afterwards. All this with the race and series sponsor on the race-winning No. 60 made it a near perfect weekend for Buescher, and allowed Graves to take a much-needed breath.

Buescher also has the distinction of being the only RFR driver to go to victory lane in the Nationwide Series in the 2014 season. Trevor Bayne and Ryan Reed were the other two drivers who drove for RFR in Nationwide competition.

If the last name of “Buescher” sounds familiar to you, Chris Buescher is the cousin of James Buescher, who also races full time in NNS. James did not make it to Victory Lane and finished 10th to Chris’s seventh.

2015 Outlook: Buescher and Graves are planning on returning to race together full-time again in 2015 in what will be the NASCAR Xfinity Series. Sponsorship has not yet been secured for the team, but Buescher expects to be back with most of the same crew anyway. Perhaps the victory and a consistent season will be enough to draw someone’s attention but, regardless, Roush’s lone victor last season will unsurprisingly be back again next year.