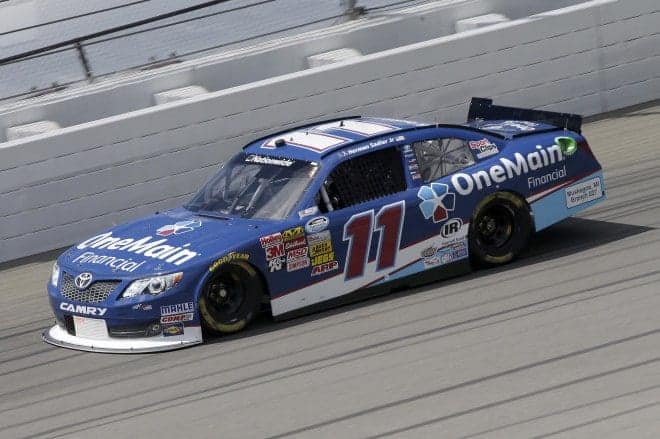 High Point: The win at Talladega certainly counts as the high point for Elliott Sadler’s 2014 season, especially considering he went winless the previous year. In addition, Sadler also earned the pole for the Fontana race, showing that his season had a sense of promise.  For a driver in Gibbs equipment, this kind of performance is what is expected

Low Point: Sure, finishing 29th and out of the race at the August Bristol race should be noted as the low point — especially as Chase Elliott closed out the season in rather mistake-free fashion — but the lowest point for Sadler was when he was too sick to drive and handed the wheel over to Clint Bowyer at Texas in November.  Though Sadler was indeed sick, the timing followed his announcement that he would be racing for a different team in 2015.

Summary: What to make of Elliott Sadler at this point of his career?  He is, basically, a serviceable driver who tends not to make mistakes and will put together a decent season.  His affable personality combined with solid driving make him a solid sell and a welcomed presence.  Sadler, however, lacks something at this point — and some might say that he never really had that ‘it’ factor anyway.

For driving top-notch equipment, Sadler should have been in position to win more races rather than eking out a number in the lower top 10 range.  He lacks that extra “something” to get the most out of his cars and his season-ending finishes now go second, fourth, and third.  Sadler is capable of putting together a good points season, but until he’s able to best the Xfinity interlopers that come from the Cup series every so often, he’s likely to continue to be frustrated in his lack of a championship.  And with some of the younger drivers showing better pace (but not consistency), battling the Xfinity regulars will get more difficult.

2015 Outlook: New year, new team, same story?  Sadler moves over to Roush Fenway Racing, a place he once called home, to continue his quest to earn a championship.  The move seems to be a little bit of a strange one as Gibbs, along with Penske, have been the class of the field while RFR has often struggled.  Perhaps the proverbial writing was on the wall at Gibbs and Sadler found his best landing spot.  Whatever negatives may surround the move, he’s still in better shape than a lot of other drivers because he brings full backing with him and should be moving back to comfortable surroundings.  Maybe the 39-year-old driver will find new life at his old home.

The move to Roush may strangely give Elliott a last shot at a return to the Cup series. There was never going to be a route back to Cup at Gibbs. Heck, I think he was only put in the 11 car for one of the races Hamlin missed the last two years. About says it all.
You look at the Roush Cup lineup for 2015 and well, maybe there’s a outside shot if Stenhouse has another season running 25th every week or Bayne has finished milking his Daytona 500 win from four years ago. That being said, this ship may have sailed as Elliott is on to his 4th owner in 5 seasons, with only a few wins to show for his return stint to the 2nd-tier series.

I’m surprised Sadler didn’t do more with Joe Gibbs equipment, especially after he won multiple races at RCR. I almost felt like it was karma after he bolted RCR for Gibbs and took his sponsor with him. I’m sure he’s thinking if Stenhouse is canned after next year, he could get his last shot at Cup bringing “One Main Financial” with him.

Sadler has talked a lot about how he believes he belongs in Cup. He must see himself as a Bobby Allison or Kurt Busch type, who should automatically elevate any vehicle he drives to the next level. As my fellow commenters have stated, he just hasn’t done that. I think he’d get a good Cup ride if he belonged.