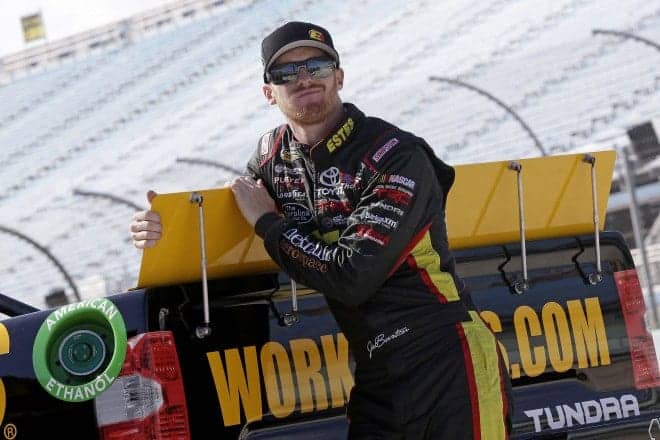 High Point: There were no wins in 2014 for this sophomore despite a trip to victory lane last year. But Jeb Burton, who mostly struggled over the final stretch, did manage a runner-up finish – his best showing of 2014 – on Halloween at Texas Motor Speedway. Although Burton never led a lap, losing out to a dominant Kyle Busch simply materializing up front proved a major confidence boost at the track that was the site of his first series win.

Low Point: It came before the season even began. Burton was expected in Turner Scott Motorsports’ No. 4, building on a solid rookie campaign in 2013, but just weeks before Daytona, Arrowhead, his sponsor, pulled out completely. No funding meant Burton was left on the sidelines without a job long after the Silly Season carousel had stopped. He ended up hooking up with ThorSport Racing, earning a full-season gig but a move so close to the beginning of the year seemed to decimate his chances, causing chaos and backward movement when many predicted he’d be a title contender.

Summary: It’s tough to get too hard on Jeb Burton. It was an uphill battle for Ward Burton’s son; after losing his ride and hooking up with ThorSport and its third truck, he managed just two top fives all season and zero poles, just a year removed from scoring seven on the latter front. Rarely was he even remotely part of the broadcasters’ mindset, often being outperformed by teams that were eons below the level of ThorSport as a whole, especially considering Burton’s stature as a teammate to eventual champion Matt Crafton.

But at the same time, things could have been much worse. Burton’s average finish of 13.2 suggests he was still near the top 10 even when he wasn’t inside it. He was running at the end of 20 out of 22 races, completing 97.1 percent of all laps run. And toward the end of the season, he was finishing on the lead lap more, suggesting improvement.

2015 Outlook: Next year is still exceedingly unclear for Burton, but perhaps it wouldn’t matter even if it wasn’t, considering how his 2013-14 offseason went. He certainly did enough to earn another shot in ThorSport’s No. 13 ride – a second season in the same truck would do him good – but nothing is currently known.